A better future through the smart technologies of a Creative Technologist

Luciënne did not have the right profile to study Industrial Design after obtaining her vwo degree. After having had a good look around, she decided to go for the bachelor's programme Creative Technology, which turned out very well, as you can read in her story below. 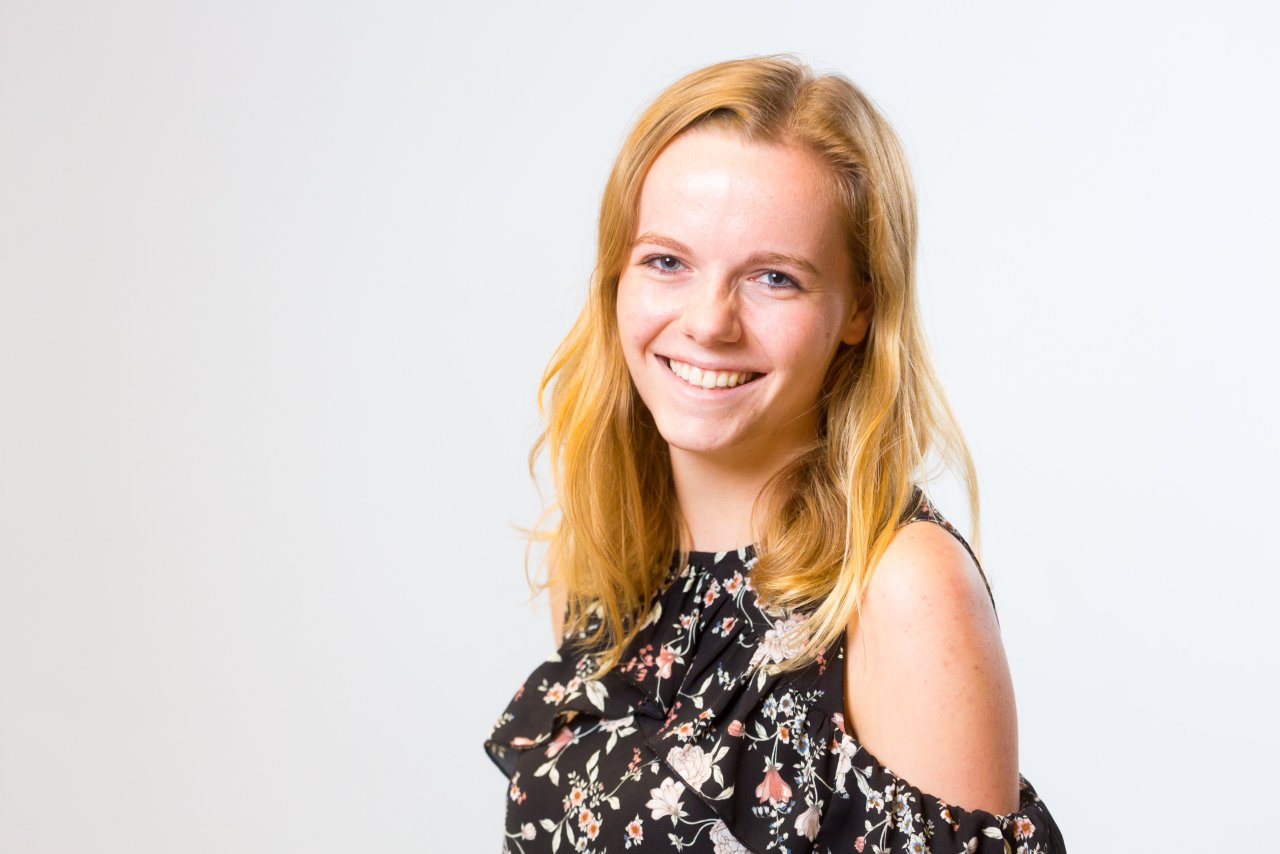 In 2014, you started studying CREATIVE TECHNOLOGY (CREATE) at the University of Twente (UT). Why did you choose this programme at ut?

Luciënne explains: "When I chose my study programme, it was very important for me to be able to express my creativity. One of the options I came across was industrial design, and this seemed to be an incredibly fun study. Unfortunately, I didn't have the right profile at school to start this course, so I ended up at Creative Technology. The plan was to eventually transfer to industrial design via this bachelor and a pre-masters programme. As it may seem a second choice, in the end, I was very happy with Creative Technology!

What appealed to me during the open day of Creative Technology was that this study was about the creative use of technology. At that time I didn't have much affinity with technology, but it was something I wanted to learn. My choice for UT was obvious, as this is the only university that offers Create. Fortunately, I found out that UT suits me in other areas as well. It is a fairly small university with a lot of personal contact. The location of UT also appealed to me. I come from a small village and am used to rural life. So a campus in the middle of the Enschede forests suits me much better than studying in a crowded city".

What makes the Bachelor's programme Creative Technology so special?

"What I find special about Creative Technology is that the programme is very versatile, but you still gain practical experience in many different areas. For example, I learned programming, soldering, design sketching, 3D animation and game design, while I have had never done any of these things. Of course, you're not immediately an expert in these things, it's up to you to put in enough time and effort to be able to do something with them in your further education or your job", says Luciënne. 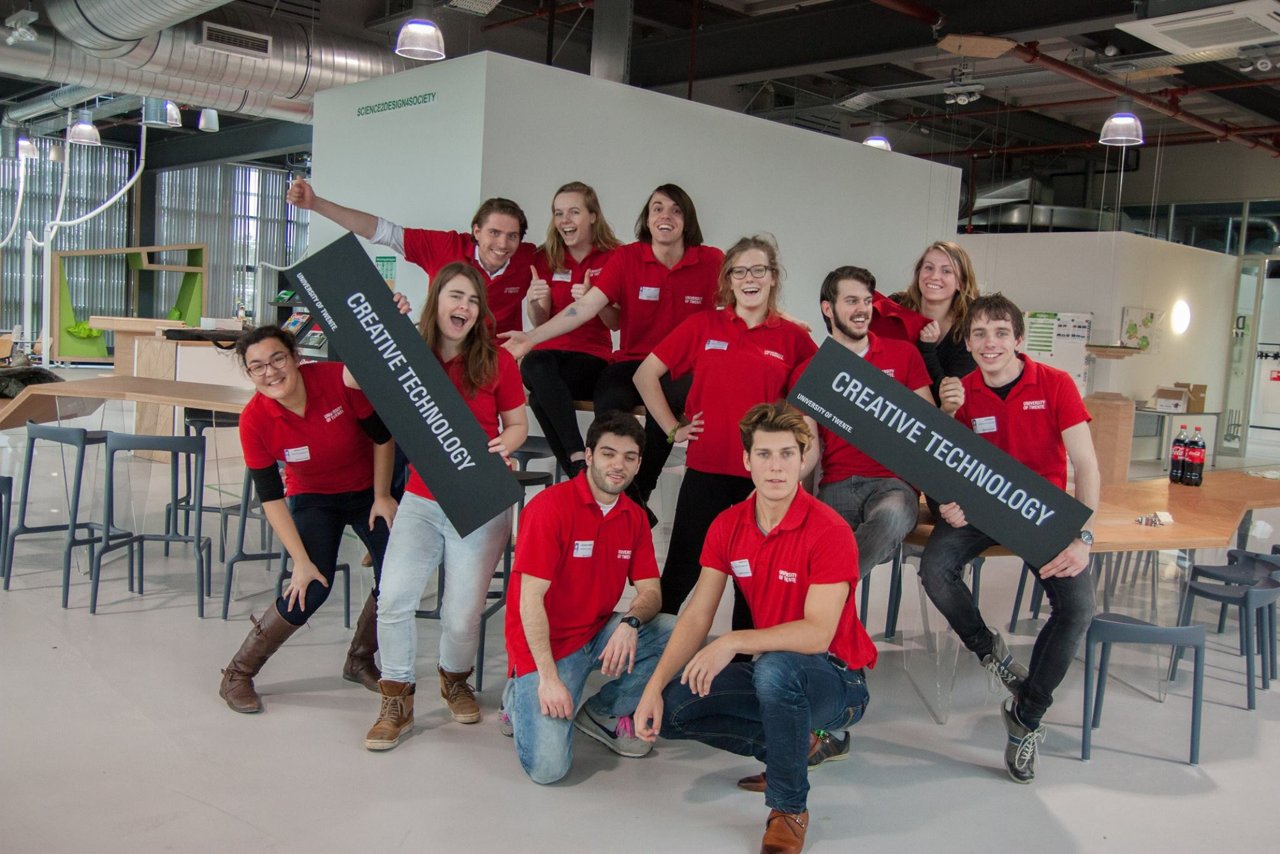 Luciënne was part of the Create team during the Open Days

Can you tell us something about a typical create assignment?

"Assignments at Create are just like the courses: versatile. I think group projects are the most typical. Every module has one such project (just like every UT programme though), in which you can combine the learned knowledge in that module. Because Create attracts people with different backgrounds and interests (you don't need a specific profile), you are often part of a project group with very different students. The trick is to find out exactly who can contribute what. Typical is that the projects often start very broad, for example, "create a smart environment". This can go in many directions. As a group, it is important to think of a feasible plan. That is why we usually start with brainstorming, to come up with as many ideas as possible. Ultimately, it is important to choose something feasible within the time and the capacities of your group, because it is almost always required to deliver a prototype at the end of the module. This also makes it very tangible: at the end of a module, there are often many ready-made solutions on the table for the case we received at the beginning. An example of such a module assignment is the one in module 5. This was about new media and I thought it was a very interesting one. During this module, we made a 3D animation video, and another assignment within the module was to develop a game. During this module, we learned a lot about virtual reality and augmented reality. I found these topics extremely interesting", Luciënne states.

“At Create you work together with students with different backgrounds and interests. The trick is to find out who can contribute what.”
Luciënne de With, alumnus Creative Technology

After graduating as a BSc Creative Technologist and before continuing with her Master's degree in Interaction Technology at the University of Twente, Luciënne did an internship at a software development company. There she worked on interaction design and the design of VR and web applications.

Can you tell us a bit more about your internship?

Luciënne: "I did this internship between my bachelor Create and my master Interaction Technology (I-Tech). During this internship, I first worked on the user interface of a VR application for safety training. What I had to take into account was that the training courses were mainly meant for people who could not read properly. Therefore, the user interface had to be intuitive and containing as little text as possible. On the other hand, I also had to consult with the developers about what was possible in terms of implementation. So I had to think carefully how I could meet the demands of my end-user (an intuitive interface) while keeping implementation feasible. You build the bridge between the wishes and needs of your end-users and, at the same time, think about what is possible and therefore feasible (and especially what is not) with the technology you use.

After this assignment, I carried out a similar type of assignment at the same company, as I redesigned the interface of a housing configurator. The housing configurator was meant for buyers of houses to put together their own house. It was visualised in VR, allowing people to take a look at their new house. In this way, they could see, for example, what different types of windows would look like, or what the choice of bricks and window frames does to the appearance of the house. However, the interface was very difficult to work with, because it was only a list of options to choose from. You only saw what a particular option meant when you clicked on it. I've made a more logical reclassification here, with things being rearranged in a logical hierarchy. I made my design for the tablet (previously it was only available for web), which made the screen layout quite different, as a tablet screen is much smaller and you interact differently with it than with a computer (you have to be able to click on things with your fingers). At the end of this assignment, I delivered a prototype of my design. I think this is also very much Create-like: delivering something tangible that gives your customer/user an idea of what the product would look like in the end and which interactions are possible. If I had had more time for this assignment, I would of course have tested this prototype with potential end-users. But by then it was September and it was time to embark on my new challenge; the master's programme Interaction Technology".

What about your life besides study?

Besides her studies, Luciënne has also been very socially active. "When I think back on that, I immediately think of my sports club Messed Up, the Enschede students' club for floorball and uni-hockey. I also contributed to the Creative Technology programme by working during the Open Days. It's great fun to show future students what your programme entails and what it's like to be a student at our UT",  Luciënne explains.