As a membrane technologist at BASF, Emiel Kappert needs a thorough knowledge of both materials science and process engineering. These two fields formed the basis of his Bachelor’s programme in Chemical Engineering at Twente. 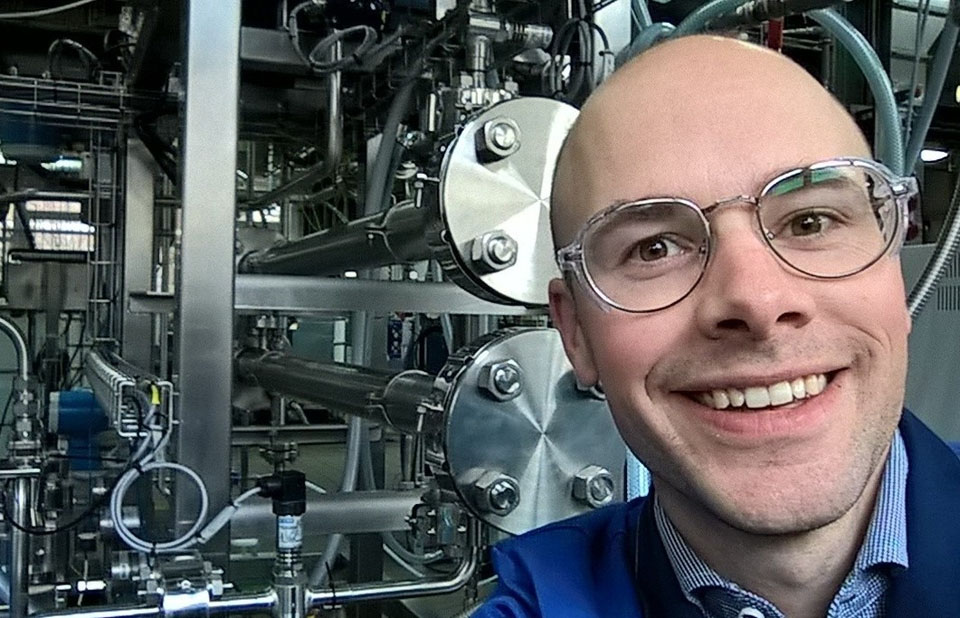 In the course of his work at Ludwigshafen in Germany, Emiel has found that his ‘bilingualism’ in this area comes in very handy. But he wasn’t referring to his knowledge of Dutch and German. “In Germany, mechanical engineering programmes often include a process engineering component. That can make it rather tricky, if you need a knowledge of chemical reactions. It is important that people speak the same language, particularly when they have trained in different fields of study. I’m glad I was raised ‘bilingually’, as I now have an understanding of both worlds – chemistry and process engineering.”

It was precisely the breadth of the programme that prompted Emiel to study Chemical Engineering. Indeed, it places great emphasis on subjects such as mathematics. In 2008, at an individual orientation day, he became convinced that Twente was the place for him. “It was a fantastic experience. The student who was showing me round introduced me to his friends. I immediately felt right at home, even though I didn’t really know anybody there. I think that is what sets Twente apart from other universities. It gives people a very strong sense of belonging. Everyone really enjoys each other’s company.”

His membership of the Alembic study association made that period particularly interesting. Emiel, who chaired the association for two years, would advise everyone to become a member. “It’s a good way to cement the bond between students”, he says. “It’s not only fun but it also helps to shape your ideas about a future career. Study trips to industrial sites in Europe and elsewhere give you the chance to acquaint yourself with the chemical industry and with people from different cultures. You get to know a lot of people, even outside your own university. While hanging around at a coffee machine here at BASF, I bumped into an old acquaintance from the study association at Eindhoven. Back then, we kept in touch on a regular basis. When it comes right down to it, the world of chemistry is quite a small place.”

After completing his Bachelor’s programme, Emiel wanted to specialize in materials science, so he signed up for the Master’s in Materials Science at Twente. He went on to obtain a PhD at the University of Twente, for research into the thermal treatment of membranes. In 2014, while still working on his PhD, he was offered the job at BASF. As part of his PhD programme, Emiel went to a Winter School in the snow. In addition to critical discussions with colleagues working in the same area, there were ample opportunities for skiing and for informal contacts. One of his colleagues suggested that he might want to take a look at BASF.

In his work as a membrane technologist, Emiel frequently draws on his knowledge of process engineering. “Chemical Engineering has given me such a broad-based knowledge of the field that I have quite a wide range of job options. My training was not only broad based, it also explored the field in considerable depth. My current focus is separation processes in the chemical industry, which involve work with hazardous substances. In terms of the challenges involved, the membranes used in these processes are quite different from those used for separating water. In addition, my extensive knowledge of the field of chemistry often comes in very handy. Ideas for applications in process engineering are always floating round at the back of my mind.”