Probing inside a material, at the interface of two different layers, is one thing. Doing this under realistic circumstances, while the materials are active, is another, and it is not so easy. That is exactly what researchers of the MESA+ Institute of the University of Twente would like to achieve, using the special machine they are building. Thanks to a three-‘colour’ X-ray system, they will be able to look at three separate depths. The machine, for which Dutch Research Council NWO granted a large subsidy, will prove its unique qualities in, for example, the development of new types of batteries for electric mobility and new catalysts for producing green hydrogen.

It is at the interface of two materials, where the magic happens. This is the case in better-performing and more sustainable batteries, it is also the case in new catalysts. Improvements can be achieved where two materials join, whether both are solid or one is solid and one is liquid. It is already possible to do measurements at interfaces, but all too often this is under special boundary conditions like a vacuum. This does not go well together with the presence of a liquid. In present-day batteries, based on lithium-ion, there is a liquid between the plus and the minus pole. Looking through the liquid, at the several layers of material underneath, is necessary for improving the performance of the battery. 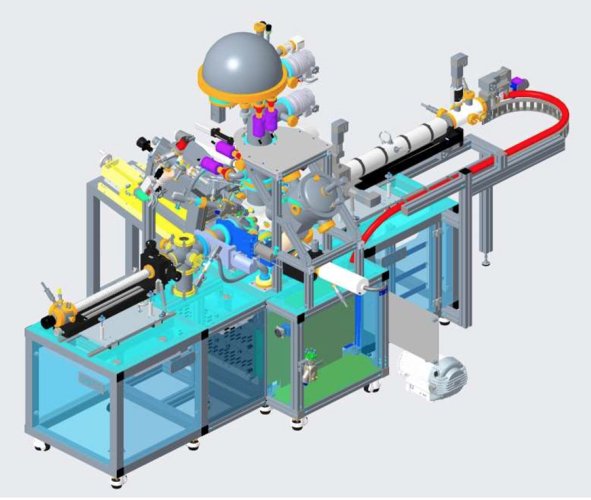 Impression of the machine to be built, with the X-ray source and the analysis chamber in the center

By creating a special ‘bubble’ for the measurements and pumping the fluid in a smart way, it is indeed possible to look through the fluid and beyond, at layers that are ‘buried’ underneath. The bubble also includes electrodes for activating the layers. Thanks to röntgen X-rays of three wavelengths, it is possible to check the material at three depths. That includes buried layers.

The technology called hard X-ray photoelectronic spectroscopy (‘lab-based HAXPES’), will be the first of its kind worldwide. Although it is already possible to look inside materials, for example using synchrotron setups like the European Synchrotron Radiation Facility (ESRF) in Grenoble, this doesn’t have the flexibility of the new system. Using HAXPES, it will be possible to measure running the battery or while producing hydrogen.

Future batteries will not contain fluids anymore, is the general expectation. There is a worldwide quest - also at the Twente Centre for Advanced Battery Technology -for the solid-state battery. In this case also, the new machine will be able to analyse buried solid layers, for finding the best combinations of new and sustainable materials that improve the battery’s performance.

HAXPES will, according to project leader Prof Gertjan Koster, add great value to the research infrastructure of the MESA+ NanoLab, especially for research on energy storage and conversion, and on catalysis. The machine, consisting of both commercially available modules and technology that is developed ‘in-house’, will be built step-by-step during the coming years.

The HAXPES machine is made possible through a 2,2 million euro grant from the ‘NWO-large’ programme of the Dutch Research Council, for large investments in innovative lab equipment.

The header image shows how a catalyst is illuminated by X-rays (purple), at the interface of liquid and solid. Photo-electrons are released that contain information about the chemical composition and the electronic structure of the sample. What is so special about this, is that the catalyst is active during analysis: the oxygen gas that is released is part of the reaction needed for producing green hydrogen from water.