Researchers at the University of Twente have designed a tiny needle in which micro-channels can be used for extracting small liquid samples from a local area of the brain. The needle is about as thick as a human hair. Thanks to this invention, neuroscientists are now able to monitor dynamic processes more quickly (within a few seconds) and accurately (micrometre precision). The research is to be published in the renowned scientific journal, Lab on a Chip.

The brain is a highly complex system, as a result of which neuroscientists have struggled to answer such questions as, ‘Why does one person get a migraine attack, and the other not?’

Doctor Mathieu Odijk of the BIOS lab-on-a-chip group explains, “To answer questions of this kind, it is important to be able to study in detail how the brain works. A key role in the working of the brain is played by the chemicals - the neurotransmitters - that carry information. However, most existing methods for monitoring neurotransmitters in the brain are not able to do so sufficiently quickly or with such localized precision.”

The small needle that has been designed by Dr Odijk and his colleagues, which is about as thick as a human hair, has micro-channels through which tiny samples of liquid from a localized part of the brain can be extracted. These samples are stored in minute water droplets of around 10 picolitre (one millionth of a raindrop) in oil. It means the information about neurotransmitters is stored in a kind of chemical memory, after which it can be processed and from which readings can be taken at a later time. This invention allows neuroscientists to monitor dynamic processes in the brain within a few seconds and to micrometre precision. 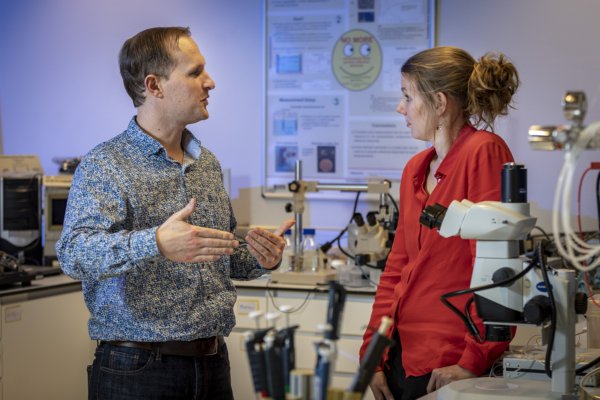 Doctor Mathieu Odijk is a researcher in the BIOS lab-on-a-chip group and works at the University of Twente Faculty of Electrical Engineering, Mathematics, and Computer Science and the MESA+ research institute. The paper entitled, ‘A miniaturized push–pull-perfusion probe for few-second sampling of neurotransmitters in the mouse Brain’, by Floris van den Brink, Thas Phisonkunkasem, Ashish Asthana, Johan Bomer, Arn van den Maagdenberg, Else Tolner, and Mathieu Odijk published on Monday 11 March in the renowned scientific journal, Lab on a Chip.

Mathieu Odijk teaches the Lab on a Chip module, which forms part of the Electrical Engineering, Chemical Science and Engineering and Biomedical Technology degree programmes.