Fifteen urban search and rescue (USaR) professionals from Sweden, the Netherlands, United Kingdom and UN-OCHA gathered at Training Base Weeze on 20 April to attend the INACHUS field test.

Using a scenario involving a major earthquake with international help requested, INACHUS partners demonstrated how the various solutions developed in the project could assist in all phases of a USaR response, through all levels of coordination. Training Base Weeze offered a realistic environment, including a worksite surrounded by rubble, to demonstrate several of the INACHUS tools. 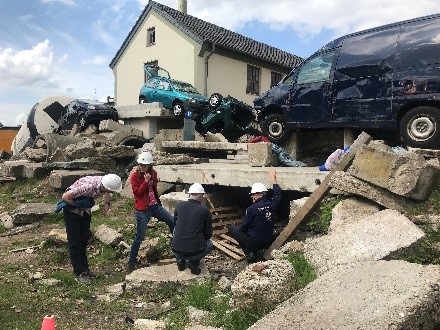 INACHUS, now in its fourth and final year, has continuously sought feedback from end users to ensure that the developed tools are as useful and relevant as possible. The event in Weeze was the first demonstration of the integrated system, as well as an opportunity to collect end user feedback. The hands-on demonstrations are described below.

Participants were asked to assume roles at all different levels of coordination when using the INACHUS COP and ESS software.

Following a scenario and completing specific tasks allowed guests to see how these tools could improve on the current pen-and-paper information sharing, instead offering real time information sharing, and offering a common operational picture across the entire affected area. On a large screen, as would likely be used in coordination centres, they could immediately visualise their results. 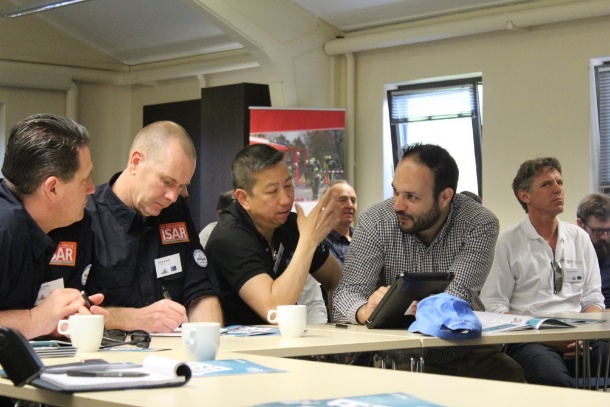 INACHUS partners demonstrated victim localisation tools in realistic conditions: a complex rubble pile, where volunteers were hidden. At four different places along the rubble the following tools were shown:

During the pilot, the end users had a chance to operate the robot. They found a victim using sensors (infrared camera and radar) integrated in the head of the robot. The two-way communication system allowed the end users to communicate with the victim. Very good feedback was gathered from the users, who found the robot easy to operate. They noted that the interface easy to use and interpret, including the sensors’ output and camera views. 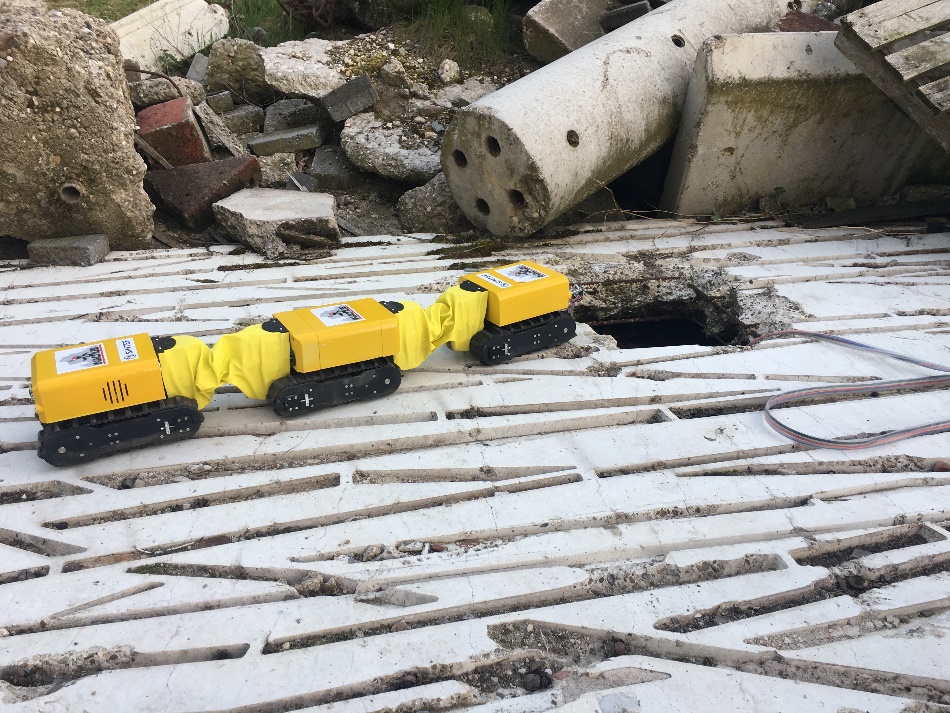 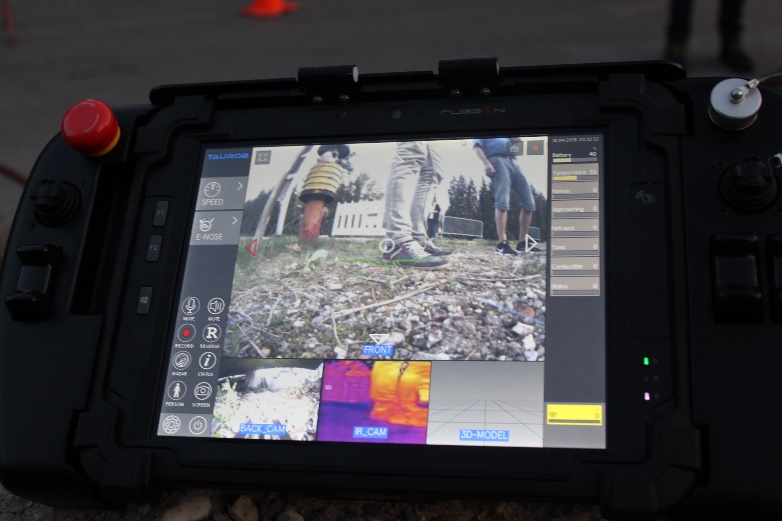 The robot and its rugged graphical user interface

The purpose of the INACHUS seismic system is to detect and locate vibrations produced by victims inside the rubble. Using a number of highly vibration-sensitive sensors placed across the site, the system can detect and locate even very weak signals. The key to success is that the system continuously learns what the background sounds like and then detects signals that differ from the background noise.

The results are visualized as a ‘heat map’ to give a better understanding of where signals are coming from. During the pilot, the system managed to detect different kinds of signals, such as knocking, shouting, tapping and even scraping. Very loud background noise generated by a power generator placed right on top of the rubble did not affect the ability to detect and locate the simulated victim. The end users were very impressed by the efficiency of the system and agreed that it is a significant step forward compared to tools currently in operational use. 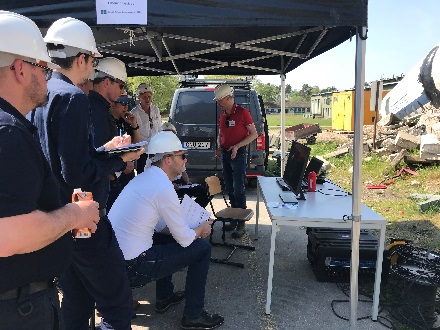 During the seismic sensor demonstration, guests saw the victim’s location on a heat map

The electronic nose is a chemical sensor able to measure gas concentrations in the air of confined spaces in order to indicate human presence and/or a hazardous atmosphere. Human presence is detected based mainly on the composition of exhaled breath. The hazards detected are the most ones most typically encountered during confined space entry; toxic and combustible atmospheres as well as an atmosphere that can cause asphyxiation.

During the demonstration the sensor could indicate the presence of a hidden alive victim by revealing changes in the composition of the air in a void. Indicative scenarios of the aforementioned hazards were also demonstrated by utilizing sample vials, gas canisters or the actual conditions. This sensor progresses the field of gas detection, and could also very useful in many other non-USaR environments.

The purpose of the INACHUS surface radar is to detect and locate subtle movements in the rubble, such as a victim moving – or even just breathing. A particular feature of the INACHUS surface radar is that it can estimate the distance and direction to the movement, to help pinpoint its location faster. Detecting movement through rubble is generally very challenging and the performance of radar systems varies significantly depending on the materials and structure of the rubble pile.

Nevertheless, during the pilot the surface radar was able to detect slight movements through thick concrete. The end users found the tool easy to use and the interface simple to understand. However, the distance between the sensor and the movement at the particular site was limited and did not reflect the full potential of using radar for motion detection. 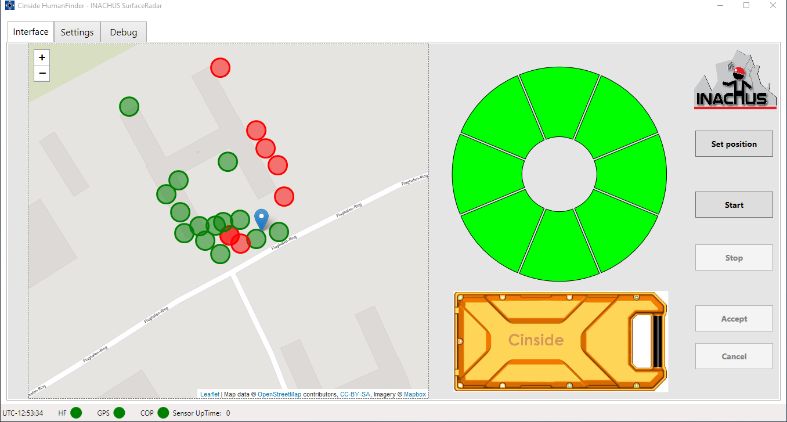 The Surface Radar interface shows the location and results of detections (colored dots). When a victim is detected, wedges along the circle indicate the direction of the source.

INACHUS is developing a reliable, autonomous and secure communication network, essential to USaR operations where existing communications means are often either overloaded or simply not functioning. The INACHUS network can be used to share digitalized INSARAG forms (completed in the ESS) and other data from the field in real time. Furthermore, it will allow for communication between the Base of Operations (including the COP) and the worksite, which end users state is a common problem in real missions. 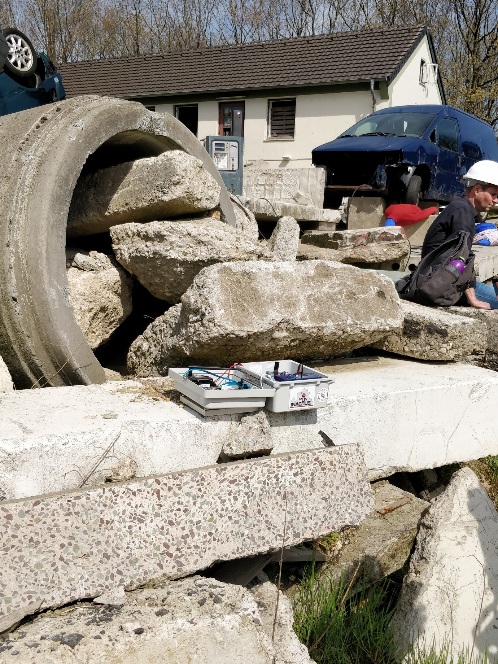 The Communication network modules during installation in the rubble during the pilot.

Participants were very interested in the development of INACHUS tools, which they anticipate adding significant value to their current operations. They offered useful feedback for continued progress and expressed interest in remaining involved in the project’s development.

The INACHUS consortium benefitted greatly from end user feedback, with ideas for further improvements to be demonstrated in the project’s final field test. Furthermore, they received invitations from users to demonstrate their tools in USaR exercises.

INACHUS incorporates four pilot demonstrations as the project progresses, each increasing in complexity. The first field test, held in Ågesta, Sweden in June 2016, focused on victim localisation tools. The second, held in France in May 2017, concentrated on wide area assessment tools and collapse modelling tools. This third field test in Weeze was the first demonstration of the integrated INACHUS tools. The project’s final field test, to be held along the French and Italian border in winter 2018, will demonstrate the fully integrated INACHUS system.