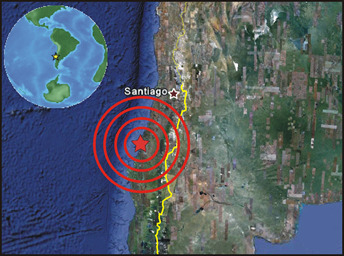 The magnitude 8.8 earthquake occurred on 27 February 2010, at 03:34 a.m. local time. The epicenter was located at 35.909°S, 72.733°W (just offshore), at a depth of about 35 km. The capital, Santiago, lies some 330 km NNE, too far to be strongly affected. The effects were far more strongly felt in the cities of Conception (Chile’s second city) and Chillan, both about 100 km away. The event was felt as far away as Southern Peru, Bolivia and Buenos Aires (Argentina), and lasted up to 30 seconds. It was the 5th strongest earthquake ever recorded, and has been followed by numerous aftershocks, some as high as magnitude 6.9 (for comparison: the January earthquake in Haiti had a magnitude of 7.0). The structural damage and number of people killed, injured or made homeless are still not clear. Fatality numbers have been approaching 800. More than 2 million people are thought to have been directly affected, and some 1.5 million buildings are expected to have been destroyed or badly damaged.

The initial event approaches the strength of the 2004 Sumatra earthquake, which was estimated between magnitude 9.1 and 9.3, and also in Chile a massive tsunami was initially feared. This did not happen (see below), but a strong local tsunami was triggered, with waves up to 2.6 m high, causing massive damage especially in Valparaiso, about 300 km north of the epicentre.

Chile is largely located on the boarders of the oceanic Nazca plate and the continental South American plate. The difference in motion between these two plates is the driving mechanism behind earthquakes happening in this region. The two plates are converging at roughly 7 to 10 meters per century. This subduction of the Nazca plate beneath the South American plate is causing high stress beneath Chile, making the country highly prone to large magnitude earthquakes.

Caption: Schematic representation of tectonic plates worldwide. Most of Chile is located on the border between the oceanic Nazca Plate and the continental South American Plate.

During the twentieth century, Chile has been struck by twenty-eight major earthquakes, all with a force greater than 6.9 on the Richter scale.
Just south of Concepción, the source of this years 2010 earthquake adjoins a fault rupture nearly 1,000 km long that produced the largest 20th-century earthquake worldwide – the giant 1960 earthquake of magnitude 9.5, the largest earthquake ever recorded. An estimated 1,600 lives were lost to the 1960 earthquake and tsunami in Chile, with the tsunami also taking over 200 lives after reaching Japan, Hawaii, and the Philippines.

2010: 5th biggest earthquake ever recorded
The earthquake on the 27th of February 2010 was the 5th biggest earthquake ever recorded and almost as strong as the one that happened in Indonesia in 2004. The fault rupture, which was largely located offshore, exceeded 100 km in width and extended nearly 500 km parallel to the coast. The rupture began deep beneath the coast and spread into western, northern and southern directions. As it spread, the fault slip generated earthquake shaking and caused vertical and horizontal deformation of the Earth’s surface over a large area. US scientists have measured with GPS that the city of Concepcion has moved more than 3 meters to the west. The Chilean capital Santiago was shifted 27.7 cm in western direction, and even Buenos Aires, the capital of Argentina, moved 4 cm with respect to its location before the earthquake.

The sudden vertical movement of the ocean floor also caused a tsunami along the fault-rupture area. Tsunamis can be generated when the sea floor abruptly deforms and vertically displaces the overlying water. The entire water column is disturbed by the uplift or subsidence of the sea floor. Waves are formed as the displaced water mass attempts to regain its equilibrium. These waves affect the whole column of water between the surface and the sea floor as they move, from the region of origin in the middle of the sea, towards the coast.

Although this earthquake was one of the largest that ever happened it only created a relatively small tsunami. It caused some damage in Chile but not much in other parts of the world, contrary to the 1960 Chilean and the 2004 Indonesia earthquake that affected large parts of the Pacific and Indian ocean, respectively. Although there are different theories as to why this was the case, the most convincing is the fact that the earthquake had its largest stress release in relatively shallower waters compared to the other two tsunami generating events. The 1960 earthquake in Chile happened in much deeper water, therefore, replacing a much larger water column. This large displaced water column turns into a large tsunami wave when approaching the coast, entering into shallow coastal waters, leading to increased wave heights. The February 2010 earthquake only took place in very shallow waters close to the coast, displacing a much smaller water column. This tsunami caused big waves locally but did not contain enough energy to travel the whole ocean to create giant waves on the other side of the Pacific.

The tsunami from 2004 raised a serious, and at times heated discussion on tsunami warning systems. No coordinated warnings were issued, many coastal regions never received any warning, and in those who did, communities had little to no idea what to do with the warning. This time the Pacific Tsunami Warning System functioned very well. Within an hour after the event most of the island states in the Pacific and countries surrounding the Pacific were warned. That after 30 hours it turned out that the tsunami was not that strong is only a relief but it was a very strong improvement with respect to earlier events.

The Chile earthquake happened when most international organisations were still heavily involved in the Haiti earthquake aftermath. The scale of that earlier event in January, and the massive international response that followed, threatened to eclipse the severity of the Chilean earthquake, also because it was clear that Chile had been far less affected than Haiti. Nevertheless, the International Charter “Space and Major Disasters” (http://www.disasterscharter.org) was activated. The Charter aims at providing a unified and orchestrated response to significant disaster events, drawing on the satellite infrastructure of all major space agencies. Satellite images are obtained on a priority basis, and processed by one of several organisations – typically UNOSAT, the Center for Crisis Information of the German Space Agency (DLR-ZKI), or SERTIT, based at the University of Strasbourg. In more than 200 Charter activations since 2001, much experience has been accumulated of how to create maps of structural damage or other useful information (intact or blocked access, location of medical centers, etc.). In addition a number of other organisations has joint disaster mapping efforts in recent years, such as ITHACA (Information Technology for Humanitarian Assistance, Cooperation and Action, http://www.ithaca.polito.it/), USAID (http://www.usaid.gov/), the Joint Research Centers (JRC) of the European Commission (http://ec.europa.eu/dgs/jrc/index.cfm), or G-MOSAIC (http://www.gmes-gmosaic.eu/), an European Commission GMES (Global Monitoring for Environment and Security) service. In Figure 4 examples are shown of the diverse mapping carried out following the Chile earthquake (click for larger versions).

These maps mainly serve to aid the efforts of the humanitarian community, and are fed directly into web-based portal used by those organisations to coordinate their efforts, such as Reuter’s Alertnet (http://www.alertnet.org/) and ReliefWeb (http://www.reliefweb.int).

According to the United States Geological Survey (USGS) the Chile earthquake released about 500 times more energy than the 7.0 earthquake that struck Haiti in January. However, the devastation caused in Haiti was far greater. How can this be explained?

Both geological and socio-political reasons can be cited. While the Chile quake started at a depth of about 35 km, the Haiti event was much shallower, at approximately 13 km, allowing less dissipation of the energy. But also location was important. The nearest large cities in Chile are located about 100 km away from the epicentre. Port au Prince, Haiti’s capital, was only 25 km distant. Equally important, though, was the difference in risk and preparedness. Risk is seen as a combination of hazard (the seismic potential, or the expected local shaking intensity), and the value and vulnerability of the so-called elements at risk in the area to be affected. The latter comprises all people, building, economic activities, etc. Chile had learnt from previous large earthquakes, such as the magnitude 9.5 earthquake in 1960, for example implementing strict building codes for shake-resistant buildings, and preparing its population on how to behave during and after a large quake. This was not the case in Haiti, in part due to the long time since the last strong earthquake, the limited financial means of the national economy, and the poorly functioning government. With people living in predominantly substandard buildings, with little knowledge on the seismic hazard and how best to prepare for or behave during and after it, vulnerability in Haiti was much higher. The absence of a strong governmental response and suitable infrastructure (heavy machinery, etc.) meant that many fatalities can be attributed to help coming too late.

What is ITC doing in relation to the disaster event?

ITC does not engage in rapid damage mapping or in-field support following disasters. Our main role is capacity building, i.e. training students (largely from economically less developed countries) on how to use geoinformation science tools and methods for disaster risk management. This includes teaching how to use spatial data to assess hazard and risk, as well as risk mitigation, and disaster preparedness and management approaches. ITC also carries out research, such as on modelling the actual local site effects and seismic amplifications, or on how to use remote sensing data to map structural damage. In this context we also have a partnership with UNOSAT, where damage map methods and accuracies are investigated.

Following a request from one of ITCs partners in Chile, the Instituto Geográfico Militar, an ITC staff member. Ruben Vargas, will be sent to Chile to help in spatial data processing to support efficient and effective disaster response.