Coming from this background, I always valued all of the culture surrounding my family and where we came from, which led me to searching for universities in the Netherlands. Studying in another country meant, for me, getting closer to my roots and experiencing a lifestyle that was familiar, but one in which I had never fully immersed myself. 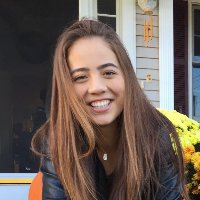 “The University of Twente’s ‘High Tech Human Touch’ was the exact notion I needed to feel at home.”
- Chynna -

When I decided on looking for universities in the Netherlands, I knew I was looking for a business program, and it needed to be in a place that fostered the same values that I felt important in a university. The concept of incorporating creativity and modern day relevant insights with critical thinking was essentially my guidepost, and the University of Twente’s ‘high tech human touch’ was the exact notion I needed to feel at home.

After doing all the research I could from the US on different Dutch universities, I visited the Open Days of the UT and of others. I knew at that point that I would make the right choice by staying in Enschede. It was important to me that there were so many opportunities for students to be involved, from participating in different sports and cultural associations to working as a student mentor, being active in the University was something that appealed to me because I had previously done so much in high school back in the States. This year I was able to be a Freshman Coach to help guide groups of first-years through their first module, show prospective students what a typical day looks at the UT as a Student-for-a-Day Mentor, as well as working on IBA’s promotion team to run the Open Days that I had attended two years prior which convinced me to study here.

The dynamic environment of the University of Twente campus is an innovative and entrepreneurial arena, intrinsically inspiring to its students. The resources available from the expertise of the always helpful teaching staff to the seemingly endless international influence make this technical university a great place for international business students to thrive.

Now nearly half-way through my degree, I have found a home in Enschede and the UT that doesn’t feel so foreign anymore. Having a close friend group of people from around the world from different backgrounds and cultures is an experience like no other, and I’ve learned more from the UT outside of my study than I ever expected."