To really do something about our massive overconsumption of water, we should limit the strain we put on rivers and freshwater basins. Information on the water use of our products should be transparent and clear. And in the end, individual citizens would have to change their lifestyle fundamentally. Taking shorter showers simply is not enough. Prof Arjen Hoekstra of the University of Twente, wrote an analysis on this in UN Chronicle, the magazine of the United Nations, on World Water Day.

Rivers such as the Yellow River and Colorado River don’t even meet the ocean anymore, lakes like the Aral Sea and the Lake Urmia dry out: a water crisis has been in the top five risks to the global economy, for many years now. Half a billion people face severe water scarcity, all year round. Two thirds of the world population live under conditions of water scarcity at least one month of the  year.

Living in a rainy country like ours, water scarcity doesn't seem to be a problem. But 40 percent of our water footprint is outside Europe!Prof. Arjen Hoekstra

“We live in a rainy country, and thus there is no water scarcity, you would say. But 40 percent of our water footprint is outside Europe, often in areas with severe water scarcity”, says Arjen Hoekstra, Professor of Water Management at the University of Twente. In particular, for our daily food, a lot of water is needed: a 200 gram steak takes 3000 liter, a 200 gram chocolate bar 3400 liter. Our clothes often come from countries suffering from severe water scarcity, like China and Bangladesh. There, it is even worse: the water isn’t just consumed but also polluted: “In Bangladesh, the water appears red, purple or deep blue, depending on the latest fashion in the West.”

How do we reach a water footprint that is sustainable, then? According to Hoekstra, we have to put a maximum on the amount of water we extract from the catchments in the world. Dry seasons have to be taken into account, as well as water needed for the natural ecosystem. Water pollution is also a factor: water that returns to the system after it has been cleaned, has no effect on the water footprint. 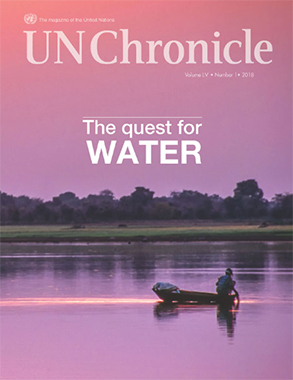 Apart from this, benchmarks are important, according to Hoekstra: especially for products that require a lot of water, like food, beverages, clothes, flowers and bioenergy. Can the production chain be altered, in order to reduce water consumption? Transparent information about the water foot print of products will help consumers make responsible choices. Save water campaigns are often about taking shorter showers or choosing another programme on your washing machine. In effect, this is just a few percent of our daily water consumption. Another way of living, eating less meat for example, will be far more effective.

A fair use of water is needed as well. In the United States and the South of Europe, citizens use twice the amount of water of the global average. Hoekstra: “If we want to stabilize our water foot print, the average annual consumption has to go from 1385 cubic meter to 835 in the year 2100, taking population growth into account.” In practice, this implies that the American citizen has to do with only 30 percent of his or her current consumption. Even in countries with water scarcity like China and India, consumption has to be reduced by over 20 percent, while at this moment it is rising sharply. It is a discussion that will give rise to sharp debates, just like the ones on climate changes, but this is the time to start, says Hoekstra.

The research of Hoekstra and his colleagues is an example of the UT research theme 'Engineering for a resilient world': how can technology help the world in dealing with risks in a sustainable way?

Prof. Arjen Hoekstra wrote his analysis ‘How to reduce our water footprint to a sustainable level’ in ‘UN Chronicle’, the magazine of the United Nations that has a special issues devoted to World Water Day, titled ‘The quest for water’.