During his internship as a Chemical Technology student at Danish company Haldor Topsøe, UT PhD researcher Kevin Rouwenhorst realised the many opportunities offered by ammonia. At the moment, it is principally used to manufacture artificial fertiliser and therefore has a bad name. But ammonia is also one of seven chemicals that form the basis of all chemical products, and it helps to feed around 50% of the world’s population.

Ammonia – NH3 – as a compound of hydrogen and nitrogen, is an ideal carrier of energy, particularly hydrogen. Rouwenhorst, under the supervision of Louis van der Ham, wanted to investigate this concept during his final research project in the town where he was born, Haaksbergen. Would the village in Twente be able to abandon fossil fuels and only use energy generated by wind turbines, solar panels and sustainably produced ammonia?

The thesis gave him an appetite for more. He came across a PhD position with the S&T research group Catalytic Processes and Materials. Over the past four years, he has specifically focused on plasma-enhanced catalytic ammonia synthesis under the supervision of Leon Lefferts. ‘Around 80% of our air is made up of nitrogen. This nitrogen has to be broken up during the process in order to create ammonia,’ explains Rouwenhorst. ‘To this end, you need a catalytic agent. But the connections are so strong that you need industrial temperatures of between 400 and 500 degrees Celsius. Plasma helps to realise the same process at temperatures of between 200 and 300 degrees Celsius.’

But, as is so often the case in science, the route to the final destination is anything but straightforward. This was soon realised by the PhD candidate. ‘In practice, the process was not the best option for converting nitrogen to ammonia. But the plasma process did seem to be useful for other applications, such as the production of nitric acid, which is also used in the manufacturing of artificial fertiliser.’

These experiments on a small scale, in the laboratory, are one thing. But Rouwenhorst has found developments outside these walls to be far more interesting. Or, rather, it is the combination that really appeals to him. ‘I’m fascinated by the translation from fundamental science to the scale of enormous chemical factories. And also how people will respond to this type of development.’ That is why Rouwenhorst is not only a PhD candidate; he is also working for the Ammonia Energy Association and is an Innovation Engineer for the company Proton Ventures. ‘It helps to view developments from various perspectives. I am energised by the combination of doing something that is useful and also realistic.'

And that is precisely what has been going on over the past few years. Rouwenhorst adds that there has been technology for producing renewable ammonia on an industrial scale since 1920. ‘But the focus diminished and more recently only a handful of scientists have maintained their faith in the concept.’ But the tide has turned in the past few years. ‘At the moment, factories on a gigawatt scale are being built to run on renewable ammonia at numerous locations around the world. According to the International Renewable Energy Agency, ammonia is the cheapest option for transporting hydrogen across continents. Also, if you have hydrogen, you can make ammonia and vice versa. Ammonia can therefore function as a carrier of hydrogen. Moreover, the shipping industry views ammonia as the primary option for cleaner fuel.’

This would mean that the world would need far more ammonia. According to a recent report that Rouwenhorst wrote, we could need four times as much by 2050. And this must involve the lowest possible levels of CO2. If this succeeds, Rouwenhorst believes – on the basis of a 'scrap of paper’ calculation – that global CO2 emissions could be reduced by 5% simply as a result of the broader usage of ammonia. It then immediately becomes a trump card within the energy transition.

Nevertheless, he hesitates to say that ammonia is a genuine holy grail. ‘You must focus on the added value for both mankind and nature. Within continents, for example, it may be more beneficial to use the existing gas network to produce hydrogen.’ His thesis demonstrated this too. In the end, Haaksbergen was not the ideal environment for a complete conversion to renewable ammonia. ‘But, during my PhD, I worked alongside Victor Sagel and Jimmy Faria on similar research in Curaçao, where there is a lot more wind. There, it is potentially a useful solution. But, even with respect to the climate crisis, you have to be realistic and consider the local context. Otherwise, you might lose sight of your goal.’ 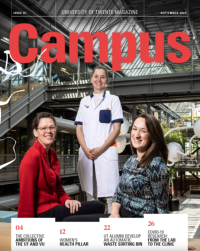 Author: Rense Kuipers, U-Today. This story appeared earlier this month in the latest Campus magazine of the University of Twente. Today, Friday 9 September, Kevin will defend his PhD thesis.