The American Physical Society (APS) elected Prof. Dave Blank as Fellow. Blank is Distinguished Professor emeritus of Inorganic Materials Science and former scientific director of UT’s MESA+ Institute for Nanotechnology. Until his retirement, in 2019, he was Chief Scientific Ambassador of the University of Twente. 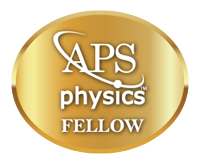 Prof. Blank is awarded the prestigious Fellowship because of his ‘pioneering experimental contributions to the science, synthesis, and technology of transition metal oxides, including devices based on these functional materials.’ He was nominated by the Forum on Applied Physics (FIAP). APS, amongst others, is publisher of the leading Physical Review series of journals and has about 54,000 members worldwide. In the 2021 round of Fellowships, 150 members are honoured.

Dave Blank (1953), who started his UT career as a lab technician, was appointed Professor of Inorganic Materials Science in 2002. In 2005, he became Scientific Director of UT’s MESA+ Institute for Nanotechnology. He was, and still is, a major advocate for a Dutch national nanotechnology agenda. In 2015, the University of Twente appointed him Distinguished Professor and Chief Scientific Ambassador.

During his career, Prof Blank received several grants and prizes, like a ‘vici’ award by Dutch Research Council NWO, a royal decoration (Knight in the Order of the Lion of The Netherlands). He is a Simon Stevin Master (Dutch award for engineering science) and together with Prof. Guus Rijnders, he won the prestigious Dutch Valorisation Award 2014. He is a member of the Royal Society of Arts and Sciences in Gothenburg, Sweden, and was a member of several high-level advisory bodies on science and technology in The Netherlands. Since his retirement in 2019, he still holds several advisory functions, like research advisor of Saxion University of Applied Sciences.