According to University of Twente PhD candidate Pim Willemsen, natural salt marshes can help to improve the strength and sustainability of traditional coastal defences. These ecosystems will expand as sea levels rise and dampen both small and large waves, thus reducing the impact on traditional coastal protection such as dykes and sea walls. Pim Willemsen will defend his thesis on this subject this Friday.

Seventy per cent of the world’s megacities (cities with more than 1.6 million inhabitants) are located in the coastal zone. The anticipated rise in sea levels and more frequent extreme weather events make it all the more essential to protect these areas against the sea. This is traditionally done with dykes and sea walls, but, according to Willemsen, these defences can be made even more effective and sustainable if salt marshes can develop in front of them. “These tidal marshes and the vegetation they support will make these coastal defences more sustainable,” says Willemsen.

To be able to predict the width of a salt marsh over this period of 50 years, Willemsen developed a computer model with which he could vary the average wave height and the amount of available sediment in the water. The results of his model corresponded with what he observed on old maps and photographs of salt marshes, and with his measurements of waves in existing salt marshes. The model predicts if the edge of a salt marsh will expand seawards or in fact shrink landwards and how this will affect the wave attenuation capacity of the marsh. 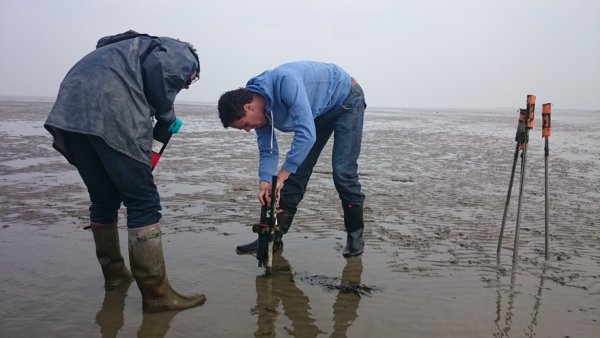 Pim Willemsen carried out his research at the Department of Water Engineering and Management (WEM; Faculty of Engineering Technology) and the Netherlands Institute for Sea Research (NIOZ). His supervisors were Prof. Suzanne Hulscher (University of Twente), Prof. Tjeerd Bouma (NIOZ) and Dr Bas Borsje (University of Twente). He will defend his thesis entitled “Biogeomorphology Of Salt Marshes - Understanding The Decadal Salt Marsh Dynamics For Flood Defence” on Friday 22 January 2021. This event can be followed live online.