UT researcher Dominik Krug is to receive a European Research Council Starting Grant of 1.5 million euros for his research on bubble-particle collisions in turbulence. ERC Starting Grants are awarded for pioneering research proposals, enabling early career scientists to found and build their own research group.

In his research project, Dominik is looking to gain insights into turbulence effects on the collision process between particles and bubbles. Such collisions are fundamental to flotation, a process widely used to separate materials based on differences in their hydrophobicity.

Applications include wastewater treatment, paper recycling, and especially mining, where flotation is used to separate minerals. This process commonly operates under strongly turbulent conditions and the important role of turbulence is now a widely accepted fact in the mineral engineering community.

The collision problem itself is yet more fundamental and has applications e.g. in biology where so-called `bubble scrubbing' affects transport in the ocean and potentially even on a moon of Saturn. Dominik: “The behaviour of a suspended species, such as particles or bubbles, in turbulence is very intriguing and can lead to surprising phenomena such as local `de-mixing’. We now know that such effects can affect the collision rate significantly, but they are not accounted for in any of the current approaches to the problem. It is my goal to figure this out. What adds to the challenge is that bubbles, or light particles in general, behave differently in a turbulent flow compared to their heavy counterparts. Therefore, the bubble-particle problem is fundamentally different from e.g. droplet collisions in clouds and requires new physical concepts.”

Dominik and his team will be developing theories and models for the collision process and test these using both, experimental and numerical tools. The ultimate goal is a physics-based parametrisation of the effective bubble-particle collision rate in a realistic flow environment. 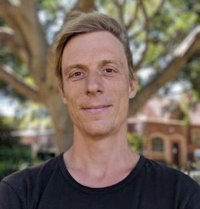 The European Research Council awards Starting Grants of maximum 1.5 million euros every year to early-stage researchers of different nationalities. The Council’s aim is to encourage promising scientists to conduct independent research in Europe as they work on building their careers.