We already call it a ‘one-and-a-half-meter society’ and get used to keeping a distance of six feet. But what is behind this distance norm? What do we actually know about the droplets when breathing or sneezing, droplets that can be carriers of the corona virus? The complex turbulent flow of moist and warm air from our throat can carry droplets for distances that are much longer than six feet, especially when the wind or an airconditioning system carries them, Professor Detlef Lohse makes clear in his article in the May issue of German ‘Physik Journal’.

Sneezing or coughing in our elbow, we really do it for a reason. Unprotected, the droplets coming out of our mouth can reach distances well over six feet. But what about simply breathing out, or friendly saying hello at a distance? The one-and-a-half meter or six feet distance calculation finds its origin in a paper ‘Air-borne infection’, that describes the transfer of tuberculosis via droplets in air. The authors made a few assumptions: they define small and big droplets and they assume droplets have no interaction. Small droplets, according to this theory of 1936, will not survive for long and don’t have to be counted in. Bigger droplets show ballistic behaviour, from which the distance can simply be derived. 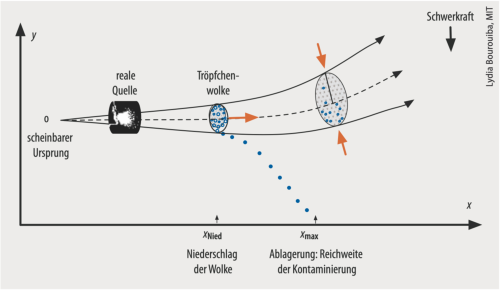 When bigger droplets are released from the flow, it can even rise again and reach distances far beyond the calculated 'xmax'

By now, we know that this isn’t that simple, says Lohse. One thing is the arbitrary choice of small and big. Is a droplet of 1 micron (one thousandth of a millimeter) small? Even if it carries ten viruses, it is only occupied for one percent. The most imporant thing we know now, is that smaller droplets live far longer: in the warm, moist and turbulent flow, they do not evaporate instantly, as was assumed in the 1936 theory. Turbulence makes it very complex: the flow that is warmer and more moist than air, and thus lighter, will rise. At the same time, the droplets that are present, tend to pull the flow down. But when bigger droplets have left, the flow can rise again. Smaller droplets can remain in the air for minutes. Caused by this, a sneeze can reach distances of 26 feet, about eight meter. Lydia Bourouiba, of MIT’s Fluid Dynamics of Disease Transmission Laboratory showed this, using simulations and high speed video.

Circumstances play a major role: when we walk outside, the wind or a cyclist's drag can transport the droplets further than we think. Inside, an airconditiong can even spread droplets across several rooms. Add to that the fact that slime is a complex fluid showing non-Newtonian behaviour, setting up adequate standards is not easy. Enlarging the distance much more than six feet, is not realistic in many situations. Mouth and nose protection may help, but does it have to be of the same standard as in healthcare, can small droplets still have an influence? What Lohse primarily makes clear is that we should be aware of the circumstances. By combining virus research and fluid dynamics, we can gain more knowledge about the conditions that play a role in virus transmission and the role small droplets have in this.

Lohse: “If the corona pandemic makes one thing clear, it is that we still do not know enough about the fluid dynamics of sneezing, coughing, speaking and even simply breathing. Answers are urgently needed, and in times like this, basic research is no longer a niche but a key discipline.”

Detlef Lohse is Distinguished Professor of Physics of Fluids at the University of Twente. He is one of the initiators of the UT-campus based Max Planck Center for Complex Fluid Dynamics.

The article ‘Die Abstandsregel in Zeiten von Corona’, in German, is in the May issue of ‘Physik Journal’, of the Deutsche Physikalische Gesellschaft.