Every year, it is an exciting moment for universities: the presentation of the Keuzegids Universiteiten, a guide for prospective students that assesses the performance of Bachelor’s programmes in the Netherlands. The most recent edition of the Keuzegids, was published today. The University of Twente can pride itself on taking home again the title of Best Technical University 2021, as well as on the fact that six of its Bachelor’s programmes have earned the Top Programme distinction.

Since 2018, the University of Twente has consistently placed among the top 3 universities in the Netherlands. Wageningen UR has been in a stable number 1 spot for years, with an average score of 73 points in this year’s ranking (on a scale of 1-100). UT follows in second place with 68.5 points, just ahead of the Open University of the Netherlands, with 67.5 points. UT’s score has earned it the title of Best Technical University 2021, for which the Keuzegids compared its performance to that of the universities of Delft and Eindhoven. 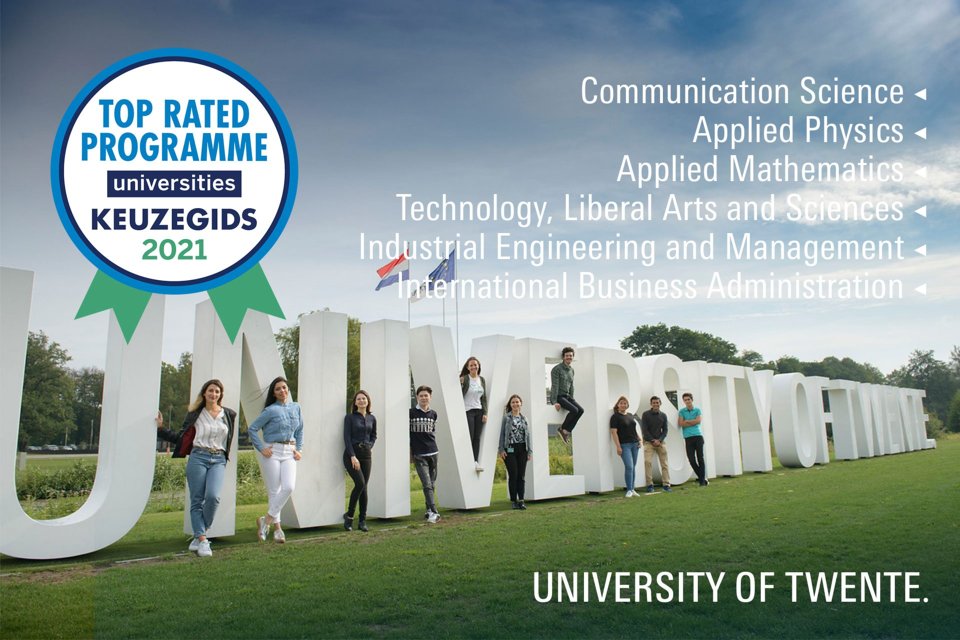 The process of putting together this year’s Keuzegids Universiteiten was different than usual. As a result of the outbreak of COVID-19, the National Student Survey could not be held this year. The results of this annual survey form part of the basis of the Keuzegids assessment, and they represent the voice of the students. Their judgement carries a lot of weight and cannot be excluded, which meant that the Keuzegids had to rely on the results of the 2019 Student Survey in compiling this year’s ranking. This is the main reason that this year’s scores are virtually the same as last year’s.

Together with the Accreditation Organisation of the Netherlands and Flanders’ (NVAO) assessment scores and the universities’ performance on indicators such as study success, a score was arrived at for each programme. However, the NVAO has recently changed its accreditation process – it no longer marks programmes as sufficient, good or excellent, but only indicates whether a programme meets the requirements.

To absorb the effects of this change, this edition of the Keuzegids gives a stronger weighting to study success: how many students enrol for the second year and how many graduate without incurring study delays?

The Keuzegids Universiteiten is an important source of information for prospective students, as well as for their parents and academic advisers. Because the figures show little change this year compared to last year, this edition pays more attention to the differences between similar programmes at different universities.