Over the last few months, the contestants of the UT Entrepreneurial Challenge have been working towards that one special moment: to deliver the pitch of their lifetime during Entrepreneurial Day at the University of Twente. Online Eye Measurement (category Start Up), ECSens (Prototype) and G-Lake (Ideation) were rewarded for their efforts with the main prizes. The final was one of the highlights of a packed edition of Entrepreneurial Day, with also the announcement of start-up incubator Incubase, the Van den Kroonenberg Prize and Marina van Damme Scholarship being awarded and a keynote lecture from Guido Berben (Tikkie).

Six of the twenty contestant that made it to the semi finals of the UT Challenge were invited to the stage in de Waaier. In just 60 seconds, they had the opportunity to convince the jury of the innovative business idea.

The winning pitch in the category Ideation was the one of Katharina Kück, Leonie Grosse-Boes, Anne Rikhof, Erik Bösert and Grace Wachter. United in G-Lake, they developed a wearable device that can provide an emergency signal and GPS coordinates in case of drowning. In the Ideation category, participants had to come up with a novel new idea, only in its early stages of development.

ECsens of Pepijn Beekman and Dilu Mathew was announced the winner in the Prototype category. Pepijn and Dilu developed a monitoring tool on nano scale, which can easily and quickly detect tumor biomarkers, within radical and long-term treatment.

In the Start Up category, the winner was Online Eye Measurement. To do well in this category, participants must already have a decent business plan that allows the young entrepreneurs to bring their idea to the market within a short period of time. Online Eye Measurement is an idea of Thomas Imhof and comprises a new method to perform a good and reliable eye measurement by only using a phone or computer screen.

Plaex was able to win the vote of the visitors of the event and were awarded the Audience Prize. Accelent Resonant Accelerometers got hold of two prizes, as they were presented the ASML Makers Award alnd the Bosch Prize. Oswald Labs was voted the best for the Volker Wessels Telecom Prize. To find out more about all contestants and their ideas, visit the UT Challenge website.

Hosting the UT Entrepreneurial Challenge is just mean of inspiring and supporting the entrepreneurial minds. To deliver more succesful and innovative business ideas in the future, the student Incubator Incubase has been set up. It is a joint initiative of Novel-T, the Student Union and the University of Twente, and will be located in the Bastille building. All students can connect to the Incubase team to receive support in developing their own business. At Entrepreneurial Day, Jeroen Bos of the Student Union announced the plans.

While many dream of setting up a succesful business, sharing the success stories may provide interesting inspiration and motivation. Guido Berben, one of the founders of payment app Tikkie, was invited to the stage to tell all about their path to becoming the Netherlands' largest online payment app with over half of the country's citizens already having paid a Tikkie to someone they know. 'Sending someone a Tikkie' is becoming a widely accepted term in Dutch language for sending someone a payment request by app, text or email. "The number of users of our app actually increased when other parties started to enter the market", Guido explained. His most important message to the audience: "If you do not really take away a problem or add value to consumer, you are not relevant and your product is bound to fail." Since the start of Tikkie, three years ago, more than 60 million payment requests have been send, with 10 per cent being paid within one minute and 88 per cent within 24 hours. Berben: "Before, it would usually take around two weeks to get the money back from all your friends when you paid a shared bill."

Wilma van Ingen, chairman of the Twente University Fund Foundation had the honour of announcing the winners of the Van den Kroonenberg Prize for succesful alumni entrepreneurs and the Marina van Damme Scholarship for female engineering talent. The Van den Kroonenberg Prize was awarded to Martin Schievink and Bart van Borssum Waalkes. The former UT students in technical computer science are the founders of Akyla, who have developed a novel system to support the administrative process of employment agencies and payrolling comanies. Joeke Nollet received the Marina van Damme Scholarship. She will use the scholarship to set up a fellowship with Flinders University in Australia in order to improve care for patients with swallowing disorders. 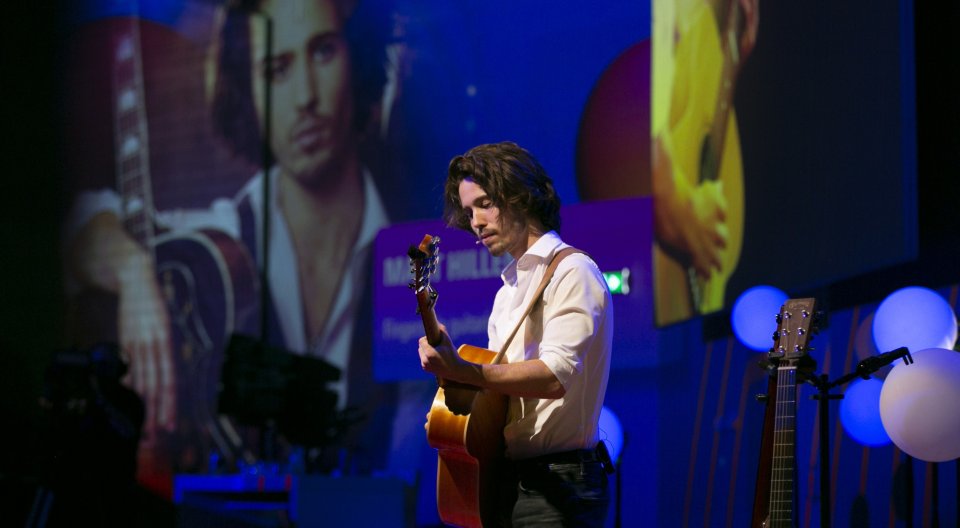