As soon as you take medication, your body is already working on removing it from your body.  According to UT PhD student Robin Klem, encapsulins - a kind of hollow protein balls - have the potential to protect enzymes and other proteins that are used as medicines until they reach their destination. For his PhD research, Robin studied the properties of encapsulins and their interactions with cells. He succeeded in packaging the ASNase enzyme where the enzyme remained active.

Encapsulins are so-called nanocages that consist of multiple proteins. It was already possible to transport dyes and metals with the proteins, but no research had been carried out into the capsuling of medically relevant proteins. "More information was needed about the structure of the encapsulins, among other things, in order to estimate their potential as a drug carrier", says Robin.

In his thesis, Robin not only describes the structure of the encapsulins, but also how he uses the protein balls to package the enzyme aspartaginase (ASNase). Little was known about the packaging of active proteins, such as enzymes. "In order to use encapsulins as a means of transporting enzymes, it is important that the enzyme does not lose its function during transport", says Robin. 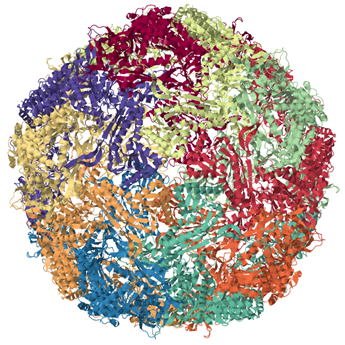 Figure 1: an example of an encapsulin

According to Robin, encapsulins have the potential to be used as drug carriers.  He says: "They are very stable and consist of biological molecules; they are molecules that also occur in nature. You can store enzymes in them and because they are not absorbed by every cell, it is also possible to transport them to a specific place in the body.“

A drug that uses encapsulins is still a long way off, according to Robin: "We have now shown, among other things, that one specific protein can be packaged and transported in one specific type of encapsulin, but for other enzymes, other types of packaging are needed. Further research into other enzymes and the possibility to adapt the encapsulins depending on the application is needed.

Robin Klem is a PhD student in the Biomolecular Nanotechnology group (Faculty S&T) with Prof. dr. Jeroen Cornelissen as his supervisor. Part of his dissertation has already been published in the journal Molecular Pharmaceutics. He is currently working for the UT-startup LipoCoat. The public defence of his thesis takes place today (Friday 6 December 2019). A digital version of his thesis titled Encapsulins as Functional Protein Nanocages is available on request.