By swiping his tablet computer, His Majesty King Willem-Alexander of The Netherlands ‘vitalized’ a piece of art, thus opening the brand new TechMed Centre of the University of Twente, on 29 November. After that, he spoke to students and staff. TechMed is the hotspot for healthcare innovation, according to Rector Thom Palstra in his speech on the occasion of UT’s 58th Dies Natalis. A speech about ‘people-first technology’. And about optimism in science.

The 58th anniversary of the UT took place at a special location on campus: it used to be a ‘cathedral of chemistry’, it was the home base for the AKI art academy. And now it is the Technical Medical Centre, or TechMed Centre, of the University of Twente. This is the place for teaching and research in the field of healthcare technology. Here, students, scientists, doctors, patients and entrepreneurs meet. Here, new ideas are born for personalized and less invasive health care. It all starts with the question: what does an individual patient need, what does society need? That is putting people, and not technology, first. If we highly value people’s needs, why not take this a step further, was the question of Rector Thom Palstra. “We would like to involve citizens in the decision-making about the choices

we make in research. That is true citizen science: TechMed is already starting a project on this, forming communities of citizen scientists.”

Video showing what the Technical Medical Centre is all about

The personal story that Petra Hes told to the audience, was very impressive. At just seventeen years of age, she had a stroke. She went to a rehab centre and felt like being in a care centre for the elderly. What she kept doing, was explore the possibilities of technology. She was the first to have a chip implanted and she made use of the LOPES robot legs, developed by the University of Twente. In doing so, she not only regained her mobility but also her inner strength. Currently, she is a coach for people in the same situation. “Always put people first”, was her plea.

In health care, the people-first approach seems a natural one. But Rector Thom Palstra also mentioned the approach in connection with the two other UT research pillars. Digitalization is one of them: “We recently saw many examples of technology that is called ‘disruptive’, changing patterns in society before we even realized. Is ‘disruptive’ still ‘people-first’, or is it typically ‘technology-push’. We have to think about that.”

‘People-first’ seems a fine ambition, but what about our planet? “This is a very relevant question indeed”, according to the Rector in his address. “That is why sustainability is the third research driver, in UT’s new research vision. A great thing is that our students keep us sharp, in making our campus more sustainable. Our research in this field means that we keep in mind the next generations of people, and respectfully treat our planet and its miraculous diversity.”

Science and technology go beyond finding practical solutions or even ‘quick fixes’. Quoting Professor Robbert Dijkgraaf, Director of the Institute of Advanced Study at Princeton, Thom Palstra says: “Science is the most systematic way of understanding our world, humans and our thinking.” In his recent public lecture, Dijkgraaf calls science ‘the last reserve of optimists’. Palstra shares this optimism, looking at all new developments including the start of TechMed. “I would call it a community instead of a reserve, but scientists do share optimism. Today is a great day to let this community of optimists grow!” 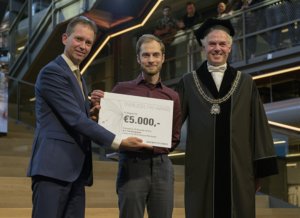 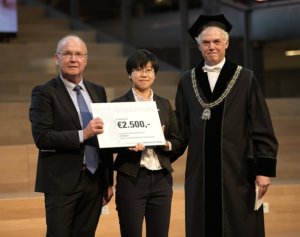 The Professor De Winter Award, named after the late Professor Herman de Winter, is an award for excellent publication by a female scientist. Dr Chuan Li, this years’s recipient, published about a combination of topological materials and superconductors: fundamental research that may find its way to future quantum computers.