Over the last one and a half year, Solar Team Twente has been focusing on one thing: performing well in the Bridgestone World Solar Challenge. The big moment has come, as the 3,000 kilometer race through the Australian outback will start this weekend. The student team, consisting of 19 students from Saxion and the University of Twente, is determined to do well.

A strong wind gust has made an end to the 2019 edition of the Bridgestone World Solar Challenge for Solar Team Twente. Shortly after the start of the fourth day, solar car Red E was blown of the track. The car hit the roadside and was not able to get back on the road. Luckily the driver was fine, but the car has been damaged, forcing the team to end their pursuit. Read the full report on the team's website.

Update race day 3: Severe conditions but still in the lead... 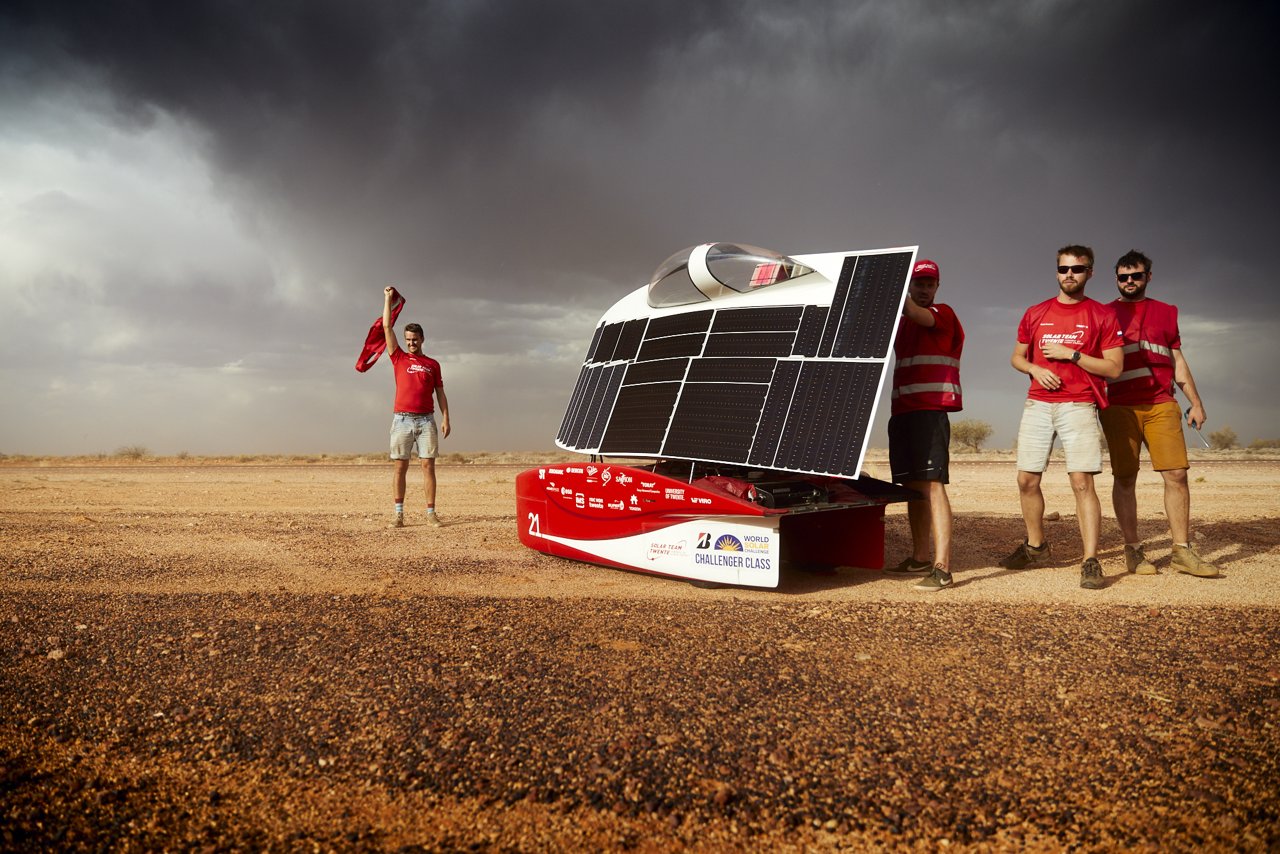 Solar Team Twente has retained its leading position on the third day of the Bridgestone World Solar Challenge. Some heavy winds and sandstorms caused some serious difficulties for the team but did not keep them from leading the race. The top three remains unchanged, although Vattenfall Solar Team came nearer to Solar Team Twente. Read the full day report here.

Solar Team Twente had a strong run during the second race day maintaining their leading position till the end of the race time slot. No serious issues occured as the team passed a number of cattle grids, had too go offroad because of road works and some serious windy conditions in the second half of the day. At the end of the day, the team is around 20 minutes ahead of number two, Nuna X. Read how all the teams are doing in the BWSC race report.

The first race day started off well, as Solar Team Twente directly searched for a battle with the teams that started ahead of Red E. In the first part, Solar Team Twente was able to overtake all four teams that had performed better in the qualification. Solar Team Twente took the lead early on the day and managed to stay ahead. Over the day, the gap with the other teams grew bigger. Read more on the website of the team. 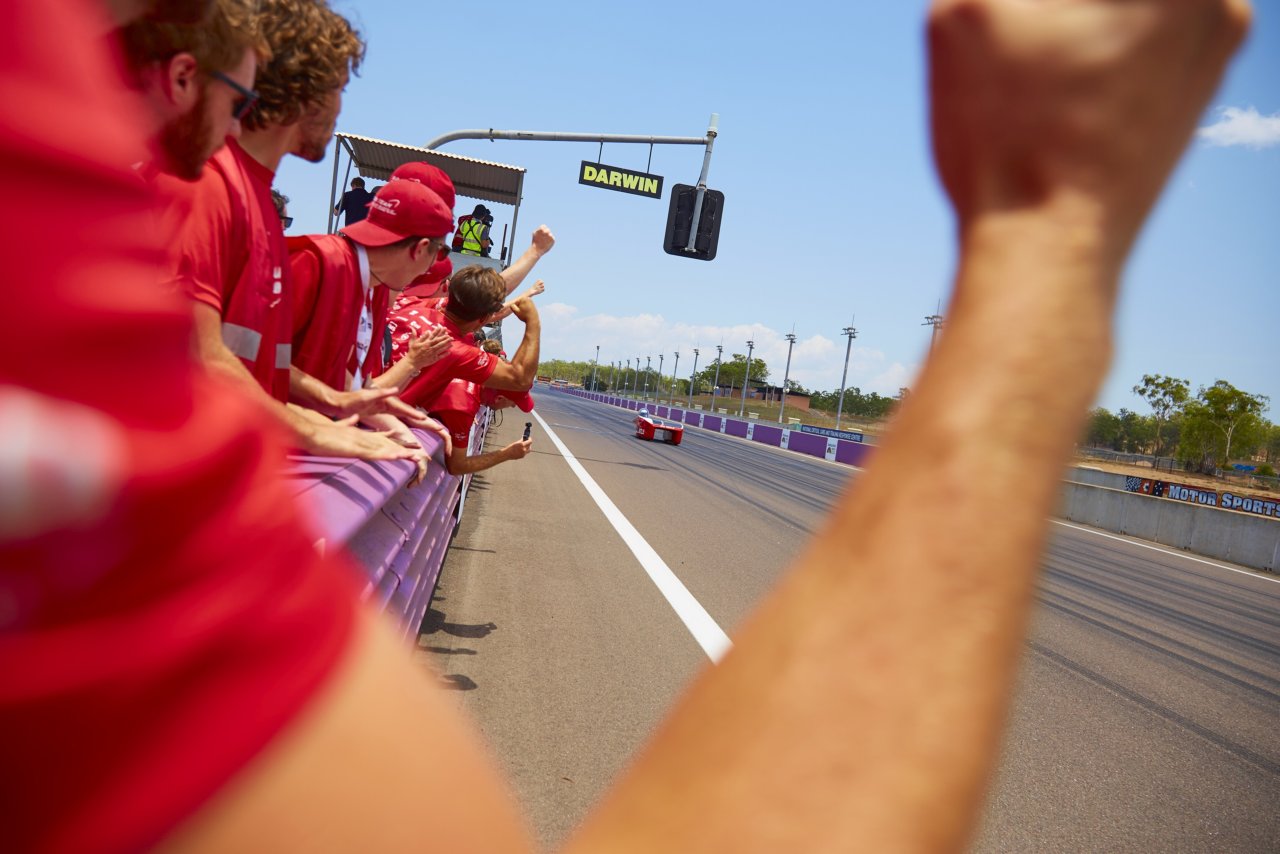 Driver Evert van der Hoek led the Red E to the fifth place in qualification on Saturday. He finished the lap around the Hidden Valley circuit in just over two minutes: 2:06. The Green Lightning from the Top Dutch Solar Racing time surprised with pole position, with the teams of Aachen and Kogakuin following in second and third position. The third Dutch participant, Vattenfall Solar Team’s Nuna starts from eight position. Read the race report here.

The team suffered a major setback last week, as they noticed some damage occured to the laminate of one of the solar panels. Further examination and testing luckily showed its effect is only minimal. It would have been a big bummer after eightteen monhts of hard work. In the World Solar Challenge, the world's best solar cars are participating. The team has been pushing hard to introduce and implement the latest innovations into their car. This week, the team presented its latest novel innovation: a new type of battery that provides electronic advantages but also adds to the handling of the Red E solar car. On their website the team explains how the battery works and how the innovation got off the ground.

Last week the team went through the scrutineering process. The car and team were carefully examined to check whether they meet all safety regulations and other competition rules. All went very smoothly.

Technical manager Sybren explains all about how the scrutineering and qualifications work.

On Saturdays, the solar cars will be taken to the track at Hidden Valley for the qualifications. These are determining the starting positions. A day later the start of the race will take place in Darwin. When the first team will pass the finish line in Adelaide is hard to predict. All is depending on the speed of the teams during the race. They do however have to comply to the Australian road regulations. This means the winner will be known most likely on Thursday.

The Bridgestone World Solar Challenge is the most prestigious race for solar powered cars. Together with more than fifty other international participants, the solar team from Twente will travel for more than 3000 kilometers through the outback of Australia with the RED E solar car. The race has three different classes. Solar Team Twente competes in the Challenger Class, the Formula 1 for solar cars.

In the coming days, you can stay updated in various ways. The organization of the World Solar Challenge will publish the accurate GPS positions of all cars on their website during the race realtime. Solar Team Twente will keep you updated on their proceedings via their own website, as they write a daily race report. You may subscribe to the videos on the YouTube channel of Solar Team Twente or send them your cheers via Facebook.