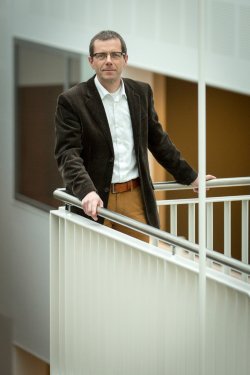 Maarten van Steen is regarded as an authority in the field of distributed computer systems. He is an alumnus of the University of Twente, where he graduated with distinction in 1983 in applied mathematics. After completing his PhD at the Computer Studies department in Leiden, Prof. Van Steen worked at TNO Delft, where he carried out research on parallel computing and gained his first experience of management. He continued his academic career at Erasmus University Rotterdam and later at the Vrije Universiteit Amsterdam, where he was appointed professor in 2002.

Prof. Van Steen focuses on multidisciplinary research on major wireless and mobile distributed systems for purposes such as tracking movement to achieve crowd control. He is affiliated with IEEE Internet Computing, Springer Computing and Advances in Complex Systems. Currently, prof. Van Steen is chairman of the National ICT-Research Platform Netherlands and chairman of the NWO-ENW advisory committee on Informatics.

Since 1 January 2015, Maarten van Steen has been Scientific Director of the CTIT (Centre for Telematics and Information Technology) research institute, in the field of IT. This institute has now been transformed into the Institute for Digital Society. This new institute will focus on the increasing digitalization of society. The institute’s research will have three focal areas: 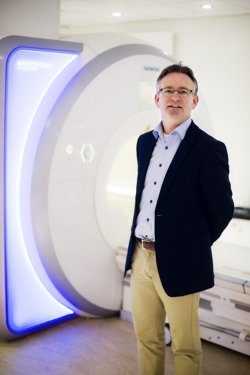 Prof. Verdonschot, an expert in orthopaedic biomechanics, has a global reputation in this field. His work has significantly helped to improve our fundamental understanding of the mechanics of implants and of the human musculoskeletal system. The computer simulation techniques he developed with his research group are now being used by orthopaedic companies to test and improve implants.

Nico Verdonschot and his team are currently attempting to generate personalized computer models. These models could help clinicians decide which type of treatment is best for a specific patient.

In 2012, Prof. Verdonschot acquired an ERC advanced grant worth 2.5 million euros, one of the many grants he has obtained during his career. This ERC grant was for the further development and expansion of his pioneering work in the field of diagnostic and evaluation methods for orthopaedic patients.

In addition to his professorships, Nico Verdonschot holds several ancillary positions and is a member of various professional associations in his field of study. Prof. Verdonschot is also a member of many other organizations, including the ‘Academia Europea’ and ‘The Netherlands Academy of Technology and Innovation’ (AcTI). He is also the initiator and chairman of the Orthopaedic Implant Section of the ‘Orthopaedic Research Society’, a leading international research society. Nico Verdonschot is also a guest lecturer at the Politecnico di Milano in Italy and was recently awarded an honorary doctorate by Aalborg University.

The TechMed Centre focuses on research developments in the area of personalized technologies in healthcare. The TechMed Centre’s work spans domains such as translational physiology, bio-engineering technology, biomedical imaging, biorobotics and health sciences.

Focus on development and cooperation

Thom Palstra, the Rector Magnificus, is delighted with these appointments “Both directors can count on substantial support within the organization. Over the past year, in the context of the UT2020 programme, Maarten van Steen has shown great commitment to the development of the new institute. Maarten is someone who takes a bottom-up approach and is development-oriented. He makes good use of his well-developed external network to help researchers generate indirect government funding/contract funding and achieve social impact. His position at the Netherlands Organisation for Scientific Research (NWO) means he is well placed to set agendas. Nico Verdonschot has the right experience at the point where science and the medical world intersect. He also has a network that is very relevant to the University of Twente. In addition, he focuses on development and cooperation, while generating the right type of energy to help researchers target external options and profiling.”

The Executive Board wishes both scientific directors every success in the performance of their duties and for the further development of their institutes. The Board expects to announce the appointment of the new MESA+ Institute at short notice.

*The names of both the Institute for Digital Society and the TechMed Institute, part of the TechMed Center, are still working titles. The final names will be announced soon.