We present a low energy Hamiltonian generalized to describe how the energy bands of germanene (Ge) are modified by interaction with a substrate or a capping layer. The parameters that enter the Hamiltonian are determined from first-principles relativistic calculations for Ge|MoS2 bilayers and MoS2|Ge|MoS2 trilayers and are used to determine the topological nature of the system. For the lowest energy, buckled germanene structure, the gap depends strongly on how germanene is oriented with respect to the MoS2 layer(s). Topologically nontrivial gaps for bilayers and trilayers can be almost as large as for a freestanding germanene layer. 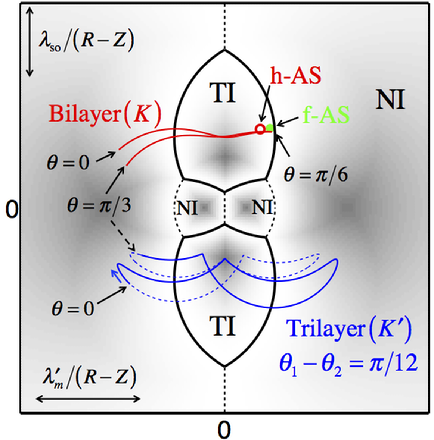 Figure 1 S Stereographic projection of the phase space of the model Hamiltonian. Black lines represent boundaries between regions where the gap vanishes; phases on either side of the dashed black lines are the same. The scaling of the λso and λm variables with R-Z is explained in the text. When germanene is rotated with respect to MoS2, a trajectory is traced out in parameter space which is shown in red for a GeMoS2 bilayer and in blue for a MoS2|Ge|MoS2 trilayer, where the two MoS2 layers are rotated with respect to one another by θ1 − θ2 = 15°.