As part of the GEOCAP programme we developed a small-scale geothermal power plant specifically for remote communities. We call this system MiniGeo. The goal is to provide an alternative to diesel generators which are both expensive as well as polluting. To prove the viability of the MiniGeo concept we are now working towards a first pilot project on Haruku, a small island in the Eastern part of Indonesia. Niek Willemsen from IF Technology has written an article of what we are doing and why it matters.

It is easy to forget that most of us live electrically powered lives. Only during a blackout are we reminded of how little works without this invisible force. At the same time, there are still many remote communities in the world that are not connected to a power grid at all. These people have to either generate their own power or find ways to live without it. This is an important issue as electricity is essential in the development and welfare of a rural community.

For example: Street lights allow women to get around more safely in the evening. Fishermen with a refrigerator can still feed their family when dont get a catch. And with modern communication comes access to education, healthcare and economic opportunities. Plenty of good reasons to work on new and better ways to provide remote communities with an affordable, clean and reliable source of power.

There are several ways to generate electricity for off-grid communities. The most common options are diesel generators, PV-battery systems or mini-hydro systems. All of these have their own pro’s and con’s.

Diesel generators are relatively cheap and reliable but their fuel is expensive and polluting. PV panels are becoming better and cheaper by the day but there is still no real affordable way to store lots of solar electricity. Without sufficient storage, powering things like refrigerators or lights with PV panels is not very effective. Mini-hydro is clean and can generate power 24/7. However, this source of power works only in places that have a suitable river and enough elevation in the landscape. A lot of communities are not that lucky.

In practise, most remote villages with their own power supply end up using diesel generators. As this is both expensive and not very sustainable we are working on a 4thoption: Small-scale geothermal energy (MiniGeo for short). 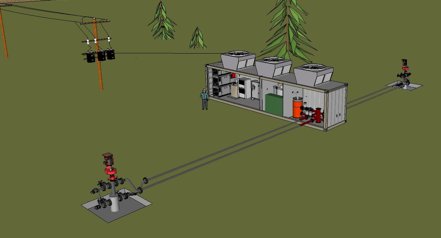 Preliminary design of the MiniGeo system.

MiniGeo is a small, modular geothermal power plant the size of a shipping container. The system is designed to generate renewable electricity for remote communities using the earth’s natural heat. The benefits of the MiniGeo are that it can generate power 24 hours a day, doesn’t require fuel, emits almost no CO2 and needs very little space. Additionally, the installation also produces heat for all kinds of local applications. We're designing units that produce between 100kW and 1MW of electricity.  Exactly how much power can be produced from one unit depends mainly on the local geology and the demand for electricity.

Our vision for the MiniGeo system is to provide much more than just energy. The demand for electricity in any community is not constant. This means there will most likely be times where the demand is lower than the supply. As geothermal heat and electricity is produced at near-zero additional costs, there is an opportunity to use the excess energy for other purposes. We have plans for a set of modular units that can provide services to the community based on this excess energy.

Think of a desalination module that uses both heat and power to produce clean drinking water from seawater. Or a drying module to dry agricultural products like tea or fruit for added commercial value and longer storage. Or even a communication module that uses some of the electricity to provide an internet and mobile phone connection to the community. It all depends on the local needs, but having energy available means there are a lot of options.

At the moment the cost of power from a MiniGeo can’t compete with grid-scale electricity production. However, in an off-grid scenario this doesn't matter because there is no grid connection. The actual alternatives like diesel generators and pv-battery systems are also more expensive than power from an electricity grid. In this scenario the MiniGeo is a very competitive power source

We estimate the current cost of electricity from a MiniGeo system to range between $0,10 – $0,20/kWh depending on geology and the size of the installation. As a reference, the cost of grid-scale power is about $0,05/kWh. However, the cost of power from off-grid PV-battery systems is at least $0,30/kWh and diesel generated power costs even more at over $0,50/kWh. This makes the MiniGeo an economically interesting alternative for remote communities that are not connected to an electricity grid.

The most important condition is that the geothermal gradient at the location allows for relatively high temperatures at reasonable depths. According to preliminary calculations a gradient of 50°C/km or more will suffice in most cases. This gradient can be found on many locations around the earth but it is not guaranteed. As the technology matures, lower gradients could be sufficient later on due to expected cost reductions.

The MiniGeo concept has been developed under the wings of the GEOCAP programme. GEOCAP is a geothermal capacity building program between The Netherlands and Indonesia. Because the inspiration for this concept came from GEOCAP, the first pilot project will most likely be installed in Indonesia. Not least because Indonesia is also ideally suited for this type of project. Especially the Eastern part of Indonesia with thousands of remote volcanic islands could benefit greatly from this type of application. There is a low availability of energy while at the same time the area is also sitting on huge geothermal resources close to the surface.

For the first pilot project we are looking at the island Haruku in the Moluccas region in Eastern Indonesia. This island has a dormant volcano in the centre and is currently using 1.5MW of diesel generators to provide electricity for some of its 25.000 inhabitants. With a MiniGeo system we aim to at least reduce the need for these generators and provide clean and stable power at lower costs. Additionally we are also looking into the production of drinking water, refrigeration as well as providing an internet connection. 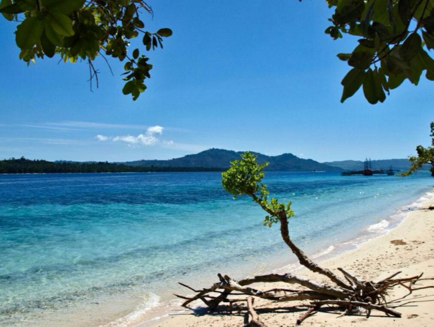 Getting the locals involved

Another important part of this phase is the involvement of the local population. We need to approach the local community in a very early phase and develop the project together. This is very important as it not only creates a shared responsibility but it also means that local knowledge about the area can be incorporated in the plans. Very simple things like: 'This area floods every few years.' or 'this is a sacred area' can mean the difference between a succesful and a failed project. Made even more important due to this being a pilot project. A succesful first project means that we have proven this idea works and that makes the following projects easier.