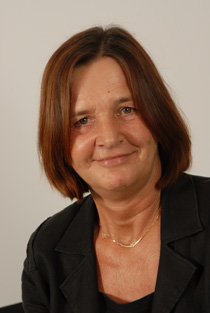 With deep regret we have to announce that our beloved secretary Dini Heres-Ticheler passed away on the 31st of December, 2010.

Dini, born February 28 in 1951, has worked for the University of Twente since 1979. In her role as secretary, she saw a lot of people come and go, and worked for different research groups and chair holders within the Department of Applied Mathematics. From the beginning, Dini was the secretary for the group Discrete Mathematics and Mathematical Programming, which exists by this name for some 10 years.

Apart from being secretary, Dini was the beating heart and the nerve centre of the group. She was the type of secretary that is pro-active and takes initiative. Moreover, she worked very efficiently, and took on a lot of work in short time.

Her experience of more than 30 years resulted in a great knowledge. Knowledge of procedures, the ability to judge what is and what is not so important, the ability to come up with creative solutions when necessary, but, most importantly, Dini knew people. This knowledge and experience, together with her background, gifted Dini with the ability to consider things in the right perspective, which was a valuable asset for the whole group.

Dini knew exactly what the scientific community expected of her as a secretary, but she did much more. She did so without complaining, with a certain modesty, sobriety, and a healthy dose of the regional “Twentse humor”. She always created a warm and open atmosphere around her. This made working with her a great pleasure.

Unfortunately, Dini had to take up an unequal battle against her illness in August 2010. Despite her strong will to fight, she ultimately lost that battle. She passed away peacefully in the presence of her close relatives on New Year's Eve.

We wish everyone who was close to Dini the strength to cope with this big loss, in particular her daughter Isabella, her grandsons Kosmo, Matz and Raaf, as well as her sister Joke.

In the name of the group Discrete Mathematics and Mathematical Programming,