Halve the sound wind turbines make without any energy loss. Placing saw teeth on the blades of wind turbines is now possible. The saw teeth are designed by Stefan Oerlemans of the University of Twente and the National Aerospace Laboratory (NLR). Oerlemans first studied the sounds wind turbines made and then used this knowledge to design the saw teeth and halve the noise. Oerlemans graduated with a PhD from the Faculty of Engineering Technology on 4 September 2009.

Rotating wind turbine blades make a characteristic whooshing sound. This noise often annoys those living nearby, so wind turbines are not always operating at full capacity and plans for new wind turbines are frequently rejected. Stefan Oerlemans, PhD candidate at the Twente of University and employee of the National Aerospace Laboratory (NLR), researched the sounds caused by wind turbines and created a solution to halve the noise without loss of energy. To achieve noise reduction, saw teeth were placed on the back edge of the outer quarter of the blades (see figure). 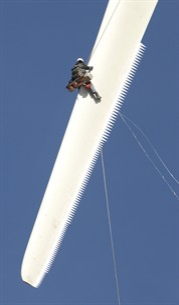 Saw teeth on the rear edge of the outer quarter of the blades.

To reduce the sound of wind turbines, Oerlemans first investigated what caused the noise and how it was produced. For this he utilized an acoustic antenna system, which uses a large number of microphones mounted on flat surfaces. By measuring and comparing the separate times that it takes a sound to reach the different microphones, the precise origin of a sound can be calculated. These measurements showed that most of the wind turbine's noise is created by airflow through the blades, and the actual sounds caused by mechanical components of wind turbines are minimal. Specifically it also revealed that the majority of the noise came from the outer parts of the blades while the blades moved downward (see figure). This noise is due to turbulent airflow eddies around the blades. However when saw teeth were placed on the blades' rear edges, the sound was halved.

A wind turbine showing the noise sources. The red area has the loudest sound.

This new method and results are part of extensive research into aircraft and wind turbine noise. Oerlemans plans to continue this research and dreams of developing even quieter wind turbines. His inspiration is that owls fly almost silently. It is assumed that the soft down feathers found on the back edge of owl wings allow this silent flight. Therefore, a row of bristles on the back edge of a wind turbine's blades would reduces any sound produced. Wind tunnels trials have already demonstrated that this is effective, but further testing is required.

Press note:
On September 4th 2009, Stefan Oerlemans graduated with a PhD from the Faculty of Engineering Technology from the Research Group Engineering Fluid Dynamics and the Institute of Mechanics, Processes and Control Twente (IMPACT). Oerlemans was supervised by Professor A. Hirschberg and Dr P. Sijtsma. This research was completed at the National Aerospace Laboratory in cooperation with the project partners Gamesa, General Electric, Universität Stuttgart, and the Energy research Centre of the Netherlands (ECN).

The thesis Detection of aeroacoustic sound sources on aircraft and wind turbines is available digitally on request.