Register for the Business Days Twente to get in touch with companies that may well be your future employer!
More information
The University of Twente wishes you a happy and healthy 2021!
To the video
The latest edition of our Campus Magazine is out now!
Read it here
Join our Dies Natalis on Friday 27 November
More information
Over the years, you and your colleagues have been working hard to provide the best possible education. For that, we received great recognition in the newest edition of the Keuzegids.
Find out more
The newest Keuzegids hails your university as Best Technical University and awards the Top rated programme title to six study programmes.
Find out more
We are proud of our great score in the Keuzegids Universiteiten, in which we received the title Best Technical University in the Netherlands!
Find out more
For the fourth time in a row, we have been named Most entrepreneurial university in the Netherlands!
Find out more
During the Online Open Days, we welcomed over 4,300 master’s and bachelor’s seekers from all over the world.
Watch the aftermovie
Previous eventNext event

Anne Buijsrogge is a PhD student in the research group Mathematics of Operations Research (MOR). Her supervisors are prof.dr. R.J. Boucherie and prof.dr.ir. B.R.H.M. Haverkort from the faculty of Electrical Engineering, Mathematics and Computer Science. 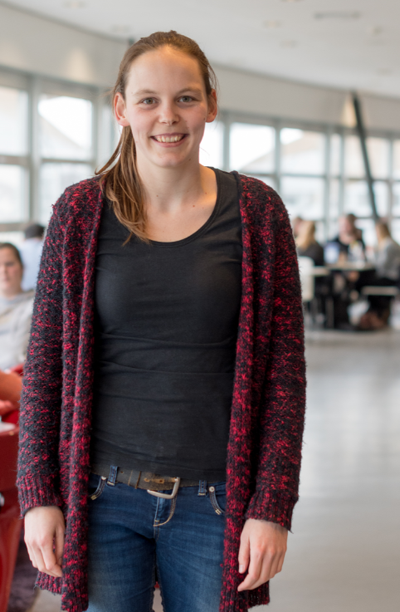 The main focus of this thesis is rare event simulation for non-Markovian tandem queues with i.i.d. arrival process and light-tailed service processes that are independent of each other. We are interested in developing simulation schemes in order to estimate the probability that the total number of customers reaches some high number during a busy cycle of the system. As ordinary simulation does not give the desired estimate in reasonable time, we consider two methods in order to decrease the simulation time: importance sampling and splitting.

Thirdly, we consider splitting. With splitting, we keep the underlying probability distributions the same, but we `encourage' the process when it tends into the right direction, that is, when the process crosses some predetermined thresholds, the process splits into several independent processes that all continue according to the same dynamics as the original process. We develop splitting thresholds using the same underlying methods as for designing the importance sampling schemes and we prove that the proposed splitting thresholds result in an asymptotically efficient estimator.

In the course of the analysis, we also consider three different, but related topics. The first is to study the large deviations behavior of the probability of interest when customer sizes differ in each of the queues. Secondly, we study state-dependent importance sampling for Markovian tandem queues and we explore the possibilities for a state-dependent change of measure using subsolutions. Lastly, we determine for a rather general class of stochastic processes the large deviations behavior of the probability that the process leaves a neighborhood of a metastable point during some long time interval [0, T] when the time interval depends on the rarity parameter.

Anne Buijsrogge is a PhD student in the research group Mathematics of Operations Research (MOR). Her supervisors are prof.dr. R.J. Boucherie and prof.dr.ir. B.R.H.M. Haverkort from the faculty of Electrical Engineering, Mathematics and Computer Science.