Please note: In the framework of the 100th public PhD defence at Wetsus (European Centre of Excellence for Sustainable Water Technology), this graduation will take place at the 'Jacobijner-church (Grote Kerk) in Leeuwarden. Address: Bredeplaats 4, 8911 EP Leeuwarden.

Gerwin Steen is a PhD student in the research group Optical Sciences (OS). His supervisor is dr.ir. H.L. Offerhaus from the Faculty of Science and Technology. 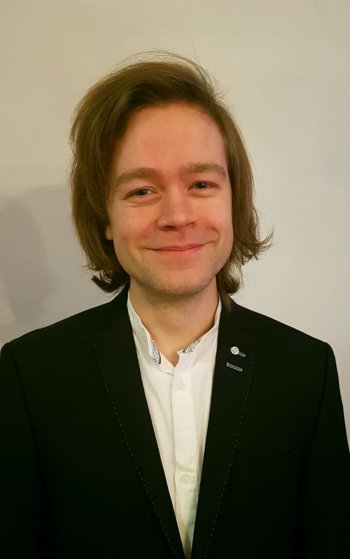 The purpose of this work was the development of an optofluidic1 absorption2 platform for detection3 of inorganic ions in water. First, the methodology was established. The absorption profiles of 16 different electrolytes with respect to the absorption of water were determined with a spectrophotometer (device to determine the absorption per wavelength). These profiles were found to be unique for the electrolytes and the signal is linearly dependent on the concentration (if the number of ions in a solution is doubled, then the absorption also doubles). This makes the method suitable for a sensor.

Second, the absorption of an electrolyte was studied when another salt was dissolved. It was concluded that the salts do influence each other, but at higher temperatures the presence of one salt has less influence on the absorption by the other salt.

Integrated optofluidic sensors were designed based on a number of boundary conditions and requirements for the sensor. Unfortunately, the first set of sensors deviated from the expected results. These chips were studied under different microscopes which revealed fabrication problems. The study led to improvements in the design. A second set (also realized by LioniX) produces results. Although more analysis is required, it can be stated that a foundation has been laid for the identification and quantification of ions in water with integrated optofluidic sensors based on absorption spectroscopy.

1An optofluidic sensor is a sensor that utilizes optical and fluidic components to measure something. The combined components can enable unique functionality. The sensor developed in this work has optic- and fluidic components on the micro scale (µm = 0.0001 cm). The main reason to develop an optofluidic sensor, is the desire to receive 'realtime' information on ion-concentration in water (for industry and the drinking water companies), and the possibility to use them in hard to reach places, such as in pipes.

2The reduction of light with the length, the type, and the amount of material is called absorption. As an example coffee prepared with many beans absorbs more light than coffee with less beans (amount of material).

3Kitchensalt (that consist of sodium- and chloride ions) can be dissolved in water, without apparent absorption-difference of light passing through water without ions. However, a meter long tube filled with water appears to be blue when looking through it. Water has a higher absorption for the red color than the blue color. Colors (wavelengths) that are more red (longer wavelengths) than the red visible for the human eyes, are called near infrared. Water absorbs wavelengths dependent, so for some wavelength more light is reduced compared to other wavelengths. An absorption spectrum shows the amount of light absorption per wavelength. The dissolving of salt in water influences the absorption spectrum of water.

Please note: In the framework of the 100th public PhD defence at Wetsus (European Centre of Excellence for Sustainable Water Technology), this graduation will take place at the 'Jacobijner-church (Grote Kerk) in Leeuwarden. Address: Bredeplaats 4, 8911 EP Leeuwarden.