Security guards at Schiphol Airport are in short supply, and the healthcare sector is on the verge of collapse due to staff shortages. Are robots the answer to all these job vacancies? Ut experts see great potential in the near future, but also make some critical observations.

This story was published in the latest edition of Campus magazine, the UT magazine for alumni and all others from the UT community. The entire magazine is available to read online.

The job market is tight. Many companies and institutions are struggling to fill vacancies. CBS recently calculated that there are only 100 job-seekers for every 133 vacancies. Things are no different in Twente. In two years’ time, the number of vacancies at Twente employers doubled to around 11,300, according to the latest Twente labour market monitor. For several organisations, the shortages lead to stagnation: companies are cutting back production despite market demand for their products, the hospitality industry is reducing its opening hours and in the educational sector, the structural shortage of teachers leads to increasingly full classrooms.

‘The COVID-19 crisis has had a major impact on the job market, as did the period of economic recovery that followed,’ Linda van Asselt points out. She is a UT alumna and programme manager at the Twente Board, a partnership between the educational institutions, government and entrepreneurs of Twente. ‘The staff shortage is by no means a temporary or new problem, but it’s now become very apparent. The population has been ageing for quite some time and will continue to do so for several decades. This makes demographic development an important factor – if not the most important one – in the growing labour market shortages. This is true for Twente, but certainly on a broader scale as well.’

Van Asselt says that technology, including the use of robotics, will play an important role in reducing the staff shortage. ‘But with technology everywhere, there will be challenges ahead: both for the technicians who develop it, but also for everyone who has to work with it. That is why we are concentrating our efforts across a very broad range of areas: from better embedding IT and technology in education, starting from primary school, to retraining and upskilling people already on the labour market.’

But where are we today? Will we see robots teaching in classrooms or working at hospitals in the near future? According to Suzanne Janssen, assistant professor of Organisational Communication, such a future is still very distant. In 2018, she was awarded a Veni grant for her research on ‘robots as colleagues’. The current use and impact of social robots in particular is still limited, Janssen argues. ‘The capabilities of social robots are mostly seen in a laboratory setting. The role of such technology in an organisational context, at a company or institution, is very minor.’ For now, these kinds of robots are mainly used as support or gadgetry. ‘To say: look at us being innovative. So far, industrial robots have had the biggest impact on employment, for example in the automotive industry. But I find this technology less interesting for my own research, as these robots hardly interact with humans.’

It is very unlikely that the future vision of a robot taking over all human tasks will be realised in the short term, the assistant professor continues. In reality, robots often learn only one or a handful of very specific tasks. Moreover, it by no means makes sense to automate everything. ‘The use of a robot can be much more expensive than employing low-cost workers. As a result, introducing a robot does not always make good business sense either. In addition, there are all kinds of ethical questions to consider, take healthcare for example. And would you want to fly in a plane that has no human pilot on board, only a robot?’

Janssen says most people continue to rely on human labour for the time being. Therefore, a less holistic view of robot use is more valuable, the assistant professor argues. ‘Above all, we should look at the different tasks a robot can perform. Distributing medication in a nursing home could be a perfect job for a robot, but we might want to leave the actual care of patients to nurses.’

People will stay in control

Sarthak Misra, UT professor of Surgical Robotics, is an expert on robots in healthcare, in minimally invasive surgery in particular. Together with his team, he runs the Surgical Robotics Laboratory, which has laboratory facilities at both the UT and the University Medical Center Groningen (UMCG). The aim of the laboratory is to develop new robots and techniques to access difficult-to-reach places within the human body. ‘We’re developing microrobots as well as larger snake-like robots. Our technology allows us to make procedures less invasive, more accurate and faster. Much of the hardcore research and engineering work is done at the UT, while clinical testing of prototypes takes place in our lab at UMCG.’

As to whether his robots will solve the staff shortage in the future, the professor dares not say. But according to Misra, a clinician will be better able to concentrate on the procedure, thanks to a robot taking over simple tasks. As a result, fewer assistants will be needed in the future. Robots can also help in training new clinicians, the professor adds. ‘A relatively young surgeon can perform complicated interventions sooner with the help of a robot, because many tasks will be automated. This allows us to train clinicians faster, which in turn helps solve the staff shortage.’ During surgery, the clinician stays in control, the professor stresses. ‘A doctor will always be the one making the crucial medical decisions; a robot is not capable of making a series of complex analyses – the technology is not quite there yet. But when it comes to very precise and repeatable tasks and recognising patterns, a surgical robot can be of immense help.’

Above all, robots allow for better patient care, Misra argues. And better healthcare ultimately leads to fewer patients and fewer support staff needed to care for patients. This reduces pressure on the healthcare system, thus being possibly the most important contribution made by robots in solving the staff shortage. ‘Take open-heart surgery, for example. After such an operation, the patient faces a long recovery. Surgical robots allow us to make the procedure less invasive, reducing the amount of time a patient has to stay in hospital. That means less nursing care and lower costs.’ Misra’s microrobots should also lead to better, personalised care. In addition, the microrobots can be put to good use in prevention and early diagnosis, making people less likely to end up in the hospital for long periods of time. ‘Using microrobots is basically like swallowing the doctor,’ the professor explains. ‘Our micro-robots can have sensors and medications for on-site diagnosis and deliver drugs precisely at the diseased area within the body. This can be done without causing damage to healthy tissue.’ However, Misra emphasises, the technology is not yet ready to be applied in everyday clinical practice. ‘We’re still far removed from having fully autonomous microrobots performing interventions in our bodies. Hopefully, this will become a reality in the future – maybe in my son’s lifetime. That’s my dream. 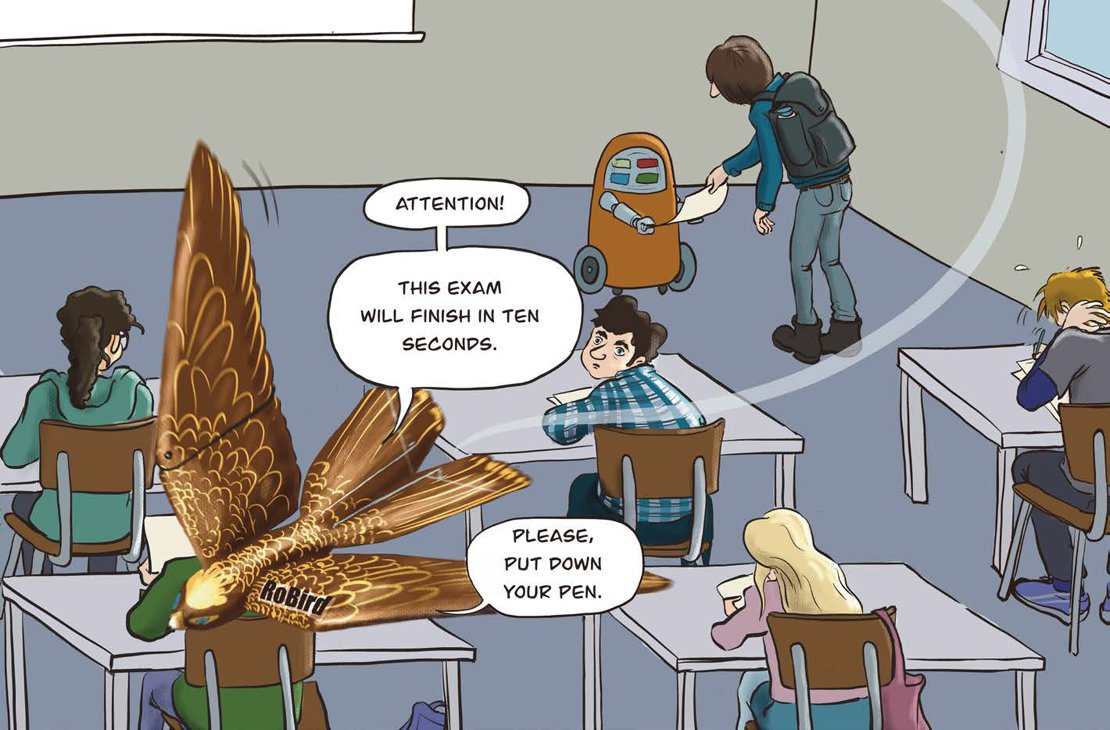 In short, the full robotisation of healthcare is still some way off. In fact, care personnel will remain indispensable. But what about the manufacturing industry, a sector that traditionally leads the way in introducing new technology? Ian Gibson is a professor of Industrial Design Engineering at the UT, and is also the scientific director of the Fraunhofer Innovation Platform for Advanced Manufacturing (FIP-AM@UT). Among companies, he has noticed a growing interest in robotics as a solution to the tight labour market. ‘Remarkably, this mainly concerns sectors that employ a relatively large number of highly skilled personnel, where it would take a lot of time to fully train a machine operator, for example. Companies are concerned that if these people leave, productivity will drop and it will be difficult to find suitable replacements.’

According to Gibson, robots are expected to become prevalent in the workplace soon. They also developed some demonstrators for industrial manufacturing at FIP-AM@UT, which allow companies to see very concrete possibilities for the near future. However, Gibson also makes a critical observation. ‘If we take a look at the impressive machines made by Boston Robotics, the world-leading mobile robotics company, or the developments in autonomous vehicles, you’d think we’re almost there, and that it’s just a matter of developing the applications. But that’s something I’ve been expecting for 30 years now. Apparently, things are never quite as simple as they seem.’

Gibson argues that the biggest robotics developments in the manufacturing industry are those in the field of intelligence. ‘In the early days of industrial robotics, the automated task was separated from the human environment to minimise the risk to humans. Sensors were developed primarily for performing the robotic task and not for monitoring other things in the immediate environment. Nowadays, there are more and more robots that can monitor other things in addition to their primary task, in order to adapt to disturbances in the workspace. I have the impression that we’re getting pretty close to robots with limited decision-making capabilities that can function alongside human operators in an industrial environment.’

It is precisely this continued development of intelligence that may lead to robots working increasingly with rather than alongside humans in the future. Such collaboration will change the culture within an organisation, Janssen knows. Employees will be given different roles and responsibilities. ‘We’ve seen this in studies on the introduction of the Da Vinci robot in hospitals, for example. This robot is a sort of extension of the surgeon. Because of the robot, the surgeon is far away from the patient, which gives nurses more autonomy and responsibility. The surgeon’s role changes from a team leader to more of a solo specialist. In addition, the small group that is able to work with the Da Vinci robot differentiates itself from other employees in the hospital, changing the dynamics within the organisation.’ Janssen herself conducted research into the introduction of robots at Utrecht University, among other things. ‘My research group consisted of cleaning staff, who were provided with a robot vacuum cleaner. However, the introduction turned out to have little effect on mutual relationships and cooperation. Things only really get interesting when new technology permanently affects an organisation, as was the case with the introduction of the Da Vinci robot. That’s when the culture of an organisation really changes.’

For most companies and institutions, this is not yet on the horizon, argues the assistant professor. ‘Every profession consists of a tremendous number of small tasks and activities. Take the US company Amazon as an example. They use robots in logistics to move orders around a warehouse, but the packing of a parcel – a fairly simple task – is still done by humans. So far, robots have mainly been used to alleviate workload. It’s incredibly difficult to automate an entire job position with several tasks, not to mention all the duties of a nurse or teacher. But in the future, robotisation will definitely affect professions. People need to prepare for this by learning new skills.’ Meanwhile, the assistant professor also makes a critical observation. ‘If it were really that easy for us to replace people with robots, wouldn’t we already have done so on a much larger scale?’

Perhaps expectations are too high. As the UT experts’ stories show, robots are not going to solve the staff shortage any time soon. New technology provides alleviation and support, but when it comes to performing a multitude of complex tasks... humans remain irreplaceable.

University of Twente has bundled its expertise in robotics into the Robotics Centre, which will officially launch this spring. More information: www.utwente.nl/robotics