A fast liquid jet, fired at a liquid drop, shows great effects. But how fast should this jet be, for penetrating straight through the droplet, just like in the legendary experiments with a bullet, shot through an apple? What is the effect of the specific liquid that is shot at? The team of David Fernandez Rivas at the University of Twente did model predictions and experiments on this. This provides valuable information for the development of needle-free injection technology. The research is in the Soft Matter journal.

‘Making apple sauce at MIT’, researcher Harold ‘Doc’ Edgerton called it. He shot a bullet at an apple, this went through at 500 m/s.  What was very special is that he, already in 1964, could capture the effect, using stroboscopic flash techniques. But as an apple is opaque, you can’t see what is happening inside. This is what UT researcher David Fernandez Rivas, who also spent some time at the Edgerton Center at MIT, is curious about. He replaced the apple by a liquid droplet hanging on a ‘straw’. And he didn’t fire a bullet but a liquid jet. This is less fast, but both experiments are strikingly similar. In the end, David would like to find out how a liquid jet effectively penetrates human skin, how far it will reach. And thus: what is the best speed? 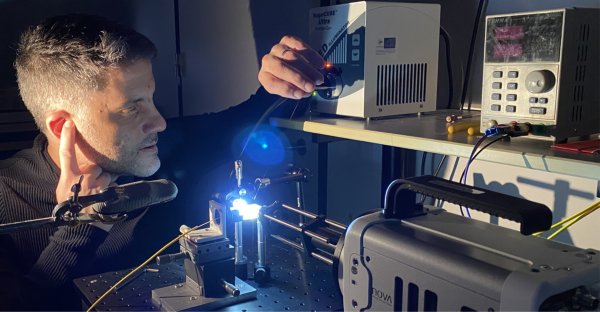 Above: selfportrait of Howard 'Doc' Edgerton (1959) with balloon and bullet. Below, in the same pose, David Fernandez Rivas (2021) with droplet and jet: too small and fast to capture with his smartphone.

The liquid jet is produced inside a tiny fluid channel on a chip. This fluid evaporates, a bubble is forming that shoots the liquid out of the channel, at a speed of about 20 m/s (72 km/h). The moment the jet touches the droplet, a cavity is formed in the droplet and the jet enters. At sufficiently high speeds, the jet traverses the drop and comes out at the other side, at lower speed tiny bubbles can be formed inside the droplet. As if the bullet would get stuck inside the apple. The researchers tried several fluids like water, glycerol and liquids with polymers in them.

In many cases, the experiments show a rebound effect as well: a liquid jet returns from the droplet, also called a Worthington jet, after the scientist who already described the formation of droplet in the 19th century – without high-speed photography and by drawing them by hand very patiently. Another effect, especially when the drop has viscoelastic properties, is that the jet comes out but is pulled back. These all are effects that would undermine the new technology of injection without using needles: that is the actual reason for doing the experiments and the dream of David Fernandez Rivas. His idea is that the injection fluid – medication, a vaccine, or ink – will be the needle in itself. This is good news for people who are afraid of needles, it avoids accidents and it lowers the amount of hospital waste. For this work, David Fernandez Rivas was recently awarded the prestigious Prince Friso Engineering Award in The Netherlands.