If someone asked you to name the ideal place to build a wind turbine, chances are your first answer would not be “behind a hill”. Yet researchers from the University of Twente have discovered that in some cases wind turbines can actually produce more energy in that position than in a wide, open landscape. In an article published in the leading scientific journal Renewable Energy, Dr Luoqin Liu and Dr Richard Stevens (Faculty of Science and Technology) show in a series of simulations that wind turbines behind hills can generate up to 24% more energy.

To study the influence of complex terrain on the energy production of wind turbines, Dr Liu conducted simulations based on a 90-metre-tall turbine with 63-metre blades. In Figure 1, the wind turbine is placed 756 metres behind a hill that is 90 metres high. The increase in production is the result of two effects. Stevens explains, “The wind speed immediately behind the hill is slower, which creates an area of low pressure. This low-pressure area sucks in air from above, where the wind is much stronger than it is close to the ground. This means that a wind turbine does not need to be higher to take advantage of the strong winds at higher altitudes.” 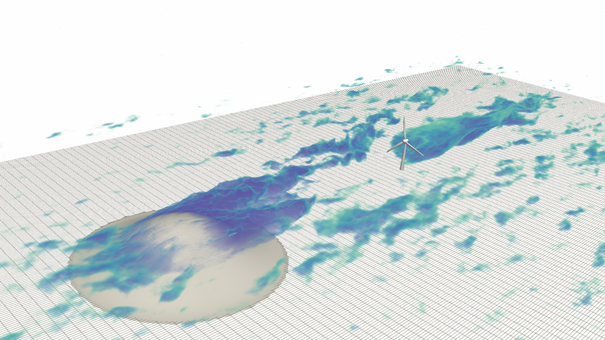 “In addition, the wind above the hill blows in a different direction to the wind close to the ground. This causes the slow-moving air to bend away from the wind turbine (see Figure 2), leaving the turbine behind the hill to benefit from the strong current,” Stevens says. These combined effects cause the wind turbine to produce up to 24% more energy than in the same conditions without the hill.

Figure 2. A view of the simulation clearly showing that the wind flow at low wind speed (blue) turns upwards behind the hill. This puts the wind turbine (the vertical line) in a stronger wind flow (red).

These findings do not mean that the government should immediately start placing all wind turbines behind hills. The simulations also show that the wind flow behind a hill is far more turbulent, which causes extra wear and tear. Whether the added yield would outweigh the cost of any additional damage remains to be seen. “For this particular situation, with only one hill, energy production is higher but real-life terrain is much more complex,” Stevens notes.

Dr Liu and Dr Stevens of the Department of Physics of Fluids at the University of Twente’s Faculty of Science and Technology are studying the operation of wind turbines in complex terrain. “Many wind turbine simulations look at the conditions associated with flat landscapes, such as large, open meadows or out at sea. Complex, hilly terrain is more difficult to simulate,” Stevens says. They published their article entitled ‘’Effects of atmospheric stability on the performance of a wind turbine located behind a three-dimensional hill’ in the scientific journal Renewable Energy.