According to University of Twente researchers Prof. Boelo Schuur and Thomas Brouwer, bio-based solvents such as Cyrene™ can be used to aid the transition to a bio-based economy. Large amounts of energy can be saved in separation processes using this solvent, compared with current industry standards. The researchers have published this finding in their article in Green Chemistry.

The researchers claim that Cyrene™, which is obtained from wood, performs better in extractive distillation applications than Sulfolane™, the current standard solvent. It can also replace N-methylpyrrolidone (NMP), which needs to be phased out as soon as possible because of its toxicity. Cyrene™ can replace both these solvents without any structural modification to processes or equipment. Also, some applications require far less energy when using Cyrene™. ‘We estimate that we can reduce energy usage by up to 30%’, says Schuur. 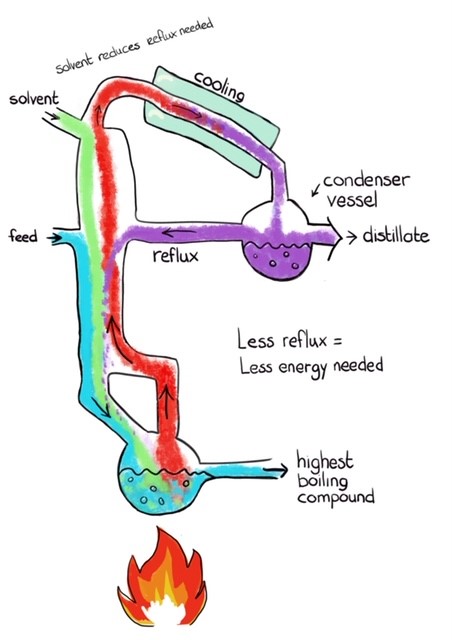 This is because much less distillate needs to be fed back into the distillation column with Cyrene™ as the solvent. Distillation involves evaporating a liquid and collecting and cooling the resulting vapour. Some of the condensed vapour has to be fed back in the form of liquid, known as ‘reflux’.

How much reflux is needed depends on the required purity of the product and the properties of the solvent. The refluxed liquid has to be re-evaporated at the base of the distillation column in the reboiler, which takes a good deal of energy. The higher the reflux, the more evaporation cycles are required. With Cyrene™ a lower reflux is possible, which reduces the number of evaporation cycles, compared with Sulfolane™.

Everything that we currently still make from oil – plastics, for instance – will need to be made from biomass in future to eliminate our dependence on oil, and reduce our CO2-footprint. Since biomass captures CO2 from the air, this helps reducing greenhouse gases in the atmosphere. ‘If we can facilitate production processes of biobased chemicals in biorefineries with naturally derived solvents as well, we’re really being environmentally conscious’, adds Schuur.

Boelo Schuur is Professor in Separation Technology in the Process & Catalysis Engineering cluster (Faculty of Science and Technology). In addition to the above application to make today’s industry more sustainable, he is looking into biorefinery processes that will enable us to obtain valuable products from nature and utilise natural resources to the full and in a sustainable manner. His findings have been published in the scientific journal Green Chemistry.