Tiny magnetic balls are a popular toy for building great 3D shapes. Imagine you’d want to use this principle for building crystal structures by self-assembly, is a spheroid still the best building block? A cuboid, maybe, or a cylinder? Researchers of the University of Twente demonstrate that, in a turbulent water flow, not spheroids but cylinders will form the most regular crystal shape. The work is presented in Science Advances of May 8.

Artificially made crystals, also know as metamaterials, have special properties that can’t be found in their natural counterparts. They can show special mechanical properties or will be able to manipulate light in a special way. They can be used for 3D electronics. The principle of self-assembly means that the basic ‘building blocks’ find their own way into the ordered crystal. This can, for example, be done by letting the solvent in which the particles are present, evaporate. Could magnetic interaction be an option for self-assembly, Leon Abelmann and his colleagues would like to know. They made millimeter-size objects of various shapes, with a magnetic north and south pole. They released them in an upward flow of water that not only compensated for gravity but was turbulent as well: the particles, in this way, will ‘feel’ disturbing forces and will be heading to an energy optimum. 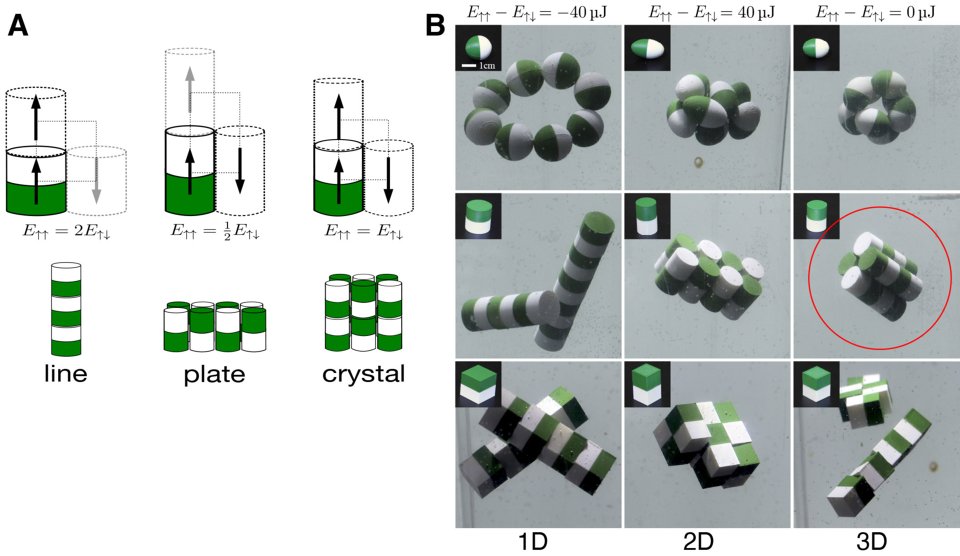 Several 1D, 2D and 3D results, based on the shape and preferred direction of the magnetic objects

Is the energy in parallel direction larger than in the antiparallel, all shapes tend to form 1D straight lines. That is, except for the spheroids: with a sufficient number of them, they will form rings. Is the preferred direction antiparallel, than 2D structures form, like ‘plates’. If the parallel energy equals the antiparallel, the spheroids cluster together, the cylinders form regular 3D crystal and the cuboids still show various shapes at the same time. Although the cylinder appears to be the best candidate for creating regular crystals, the structures that are formed with spheroids stay intact in the fluid much longer: not seconds but minutes at least. The researchers assume that spheroids are less sensitive for small deviations that lower the magnetic force between the magnets. 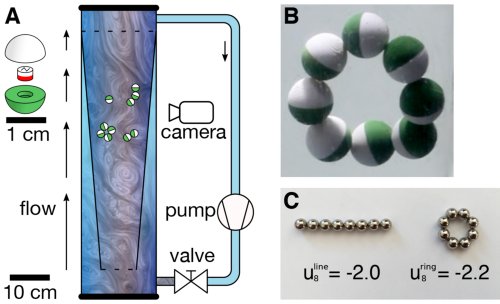 Experimental setup, with the magnetic particles in a turbulent flow inside a cone.

The experiments were done with millimeter size magnetic objects. The outcome, according to Leon Abelmann, is inspiring for miniaturization. Moving towards micrometer sizes or smaller, can be done using the manufacturing techniques for magnetic random access memories (MRAM). Using self-assembly, it could be possible to create ring-shaped magnetic memories, for example. Apart from that, the researchers expect that self-assembly can be done in the same way using electric dipoles instead of magnetic ones. This opens the way for creating 3D photonic or electronic crystals.

Prof.Dr. Leon Abelmann is working at both the University of Twente (Robotics and Mechatronics group) and KIST Europe (Korean Institute of Science and Technology) in Saarbrücken.