Breast cancer is still the most common form of cancer in women. It is possible to obtain a tissue sample for testing by inserting a needle into the breast and manipulating it to the location of the abnormal tissue (lesion). Once further tests have been carried out, it is possible to arrive at an accurate diagnosis. This procedure is known as a biopsy.
Accurate manipulation of the biopsy needle is essential in order to fight breast cancer, as with all other types of cancer. By using a special needle, the tip of which can be heated to a high temperature (thermo-ablation) or cooled to a very low temperature (cryo-ablation), it is possible to destroy tumour cells close to the tip of the needle. In this way, the cancer can be treated without major surgical procedures.

Robotics is the solution

MRI scanners are capable of detecting and visualizing the location of abnormal tissue very accurately. However, when the biopsy needle is manipulated by hand, the results are sub-optimal. The solution lies in robotics, as Vincent has demonstrated once again in his dissertation, but this approach requires a great deal of expertise. ‘Not all robots can be used successfully in combination with MRI scanners. Robots are often made of metal and that can cause problems due to the strong magnetic fields created by MRI scanners,’ he explains.
During his PhD research, Vincent investigated various types of robot and produced a number of prototypes. He had previously worked on the Stormram and Sunram robots, of which there are now five. The newest version is the Sunram 5. MURAB is a different research line to Stormram and Sunram. There is only one finished MURAB robot. Both research lines have developed in parallel to one another, and each has its own philosophy. Vincent describes both projects in his dissertation.

MURAB (MRI and Ultrasound Robotic Assisted Biopsy) is a robot outside the MRI scanner which combines ultrasound, MRI, elastography and computer vision to implement the correct biopsy strategy based on a patient-specific model. The robot takes deformations into account. For more information, watch the video below. 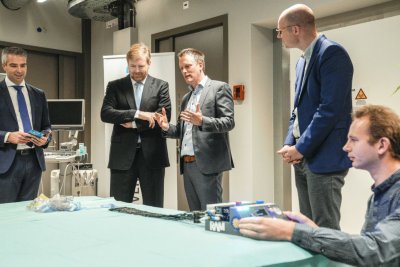 Further details are available at: https://www.murabproject.eu/

The predecessor to this robot, Stormram 4, is made of plastic by a 3D printer and is powered by pressurized air. The advantage of plastic is that the robot can be used inside an MRI scanner. Previously, the robot won a prestigious prize at the Surgical Robotic Challenge at the international Hamlyn Symposium in London. This is one of the world's most important events in the field of robotic surgery.
The Stormram has brought new energy to breast cancer diagnostics. This is due to its highly accurate use of the needle, virtually real-time scanning using MRI and a single thin needle biopsy, all of which makes diagnosis faster and more accurate.

The Stormram is driven by straight and curved hydraulic motors, and the robot is controlled using 5-metre long hoses outside the MRI scanner. The design is smaller than the previous version, meaning that it can fit into the narrow tunnel of the MRI scanner.

Vincent is also involved in Machnet Robotics, a new spin-off from the University of Twente which aims to bring a robot for MRI-driven biopsies onto the market. The groundwork for this robot is being done by Stefano Stramigioli’s research group. Stramigioli is professor of Advanced Robotics and is involved in the development of medical robots. Together with Stramigioli, Françoise Siepel and Vincent Groenhuis are the inventors of the technology behind the new biopsy robot. A patent has already been obtained. After his promotion, Vincent will remain affiliated to the University of Twente. ‘I’m still working on a research project involving a promising new type of motor with special characteristics. My work is not finished yet,’ says Vincent.

Vincent Groenhuis has worked closely with Dr Françoise Siepel and Professor Stefano Stramigioli of the University of Twente’s Robotics and Mechatronics (RAM) lab during his PhD research and in order to develop these robots. They both acted as his thesis supervisors. He also worked closely with Dr Jeroen Veltman, radiologist at the Ziekenhuis Groep Twente (ZGT) in order to refine his design as much as possible for use in clinical practice, and Abe van der Werf from Machnet B.V. Vincent has also worked with the University of Twente’s recently opened TechMed Centre.

Vincent was awarded his PhD at the University of Twente on Thursday, 9 January for his dissertation entitled Robotic systems for breast biopsy using MRI and ultrasound imaging - Optimal guidance to target lesion in deformable tissue. A digital version of his thesis is available on request.