During the Opening of the Academic Year, the Education awards were presented.

The UT awards the Education award to emphasize the importance of excellent teaching, to encourage teachers to excel and as a token of appreciation from the students’ and the university. Ipek Seyran Topan (International Business Administration) is the winner of this year’s UT Education Award. The prize is awarded by the Centrale Onderwijsprijs Commissie. Topan and the other finalists, Sissi de Beer (Chemical Engineering) and Rutger Brunink (Psychology), each give a mini-lecture during the finals of the Education Award in May after which the public and a jury entered votes for the winner. Topan received a certificate as well as a cheque of € 2,500.-.

Alice Fox is the winner of the Graduation Award of the faculty Behavioural, Management and Social sciences (BMS). She was awarded the prize for her research on sex robots and moral status in her research called “On Empathy an Alterity: How Sex Robots Encourage Us to Reconfigure Moral Status”.

The faculty of Electrical Engineering, Mathematics and Computer Science (EEMCS) decided to award two graduation awards this year. The winners were Hannah Pelikan and Erwin Hardeveld. Hannah’s research is about surgical robots and how they change teamwork in the operating room. Something as simple such as passing a tool can become difficult in robotic surgery. 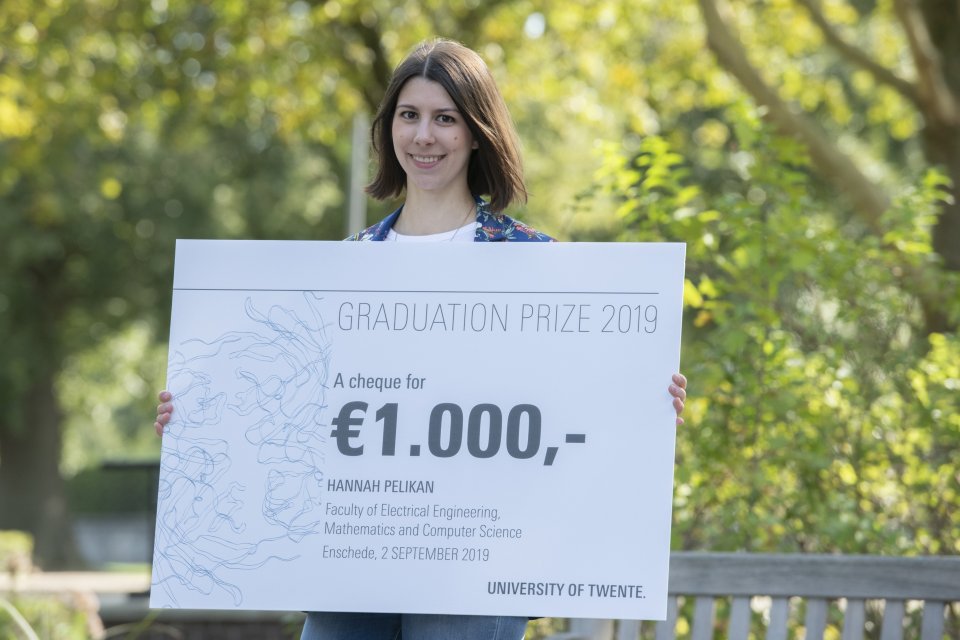 Erwin developed a new type of phase-locked loop, a circuit that generates stable radio frequencies. These frequencies are used for wireless connectivity as Bluetooth and 4G. This new type of circuit improves performance and decrease chip size. He is currently working as a PhD student in the Integrated Circuit Design (ICD) Group. 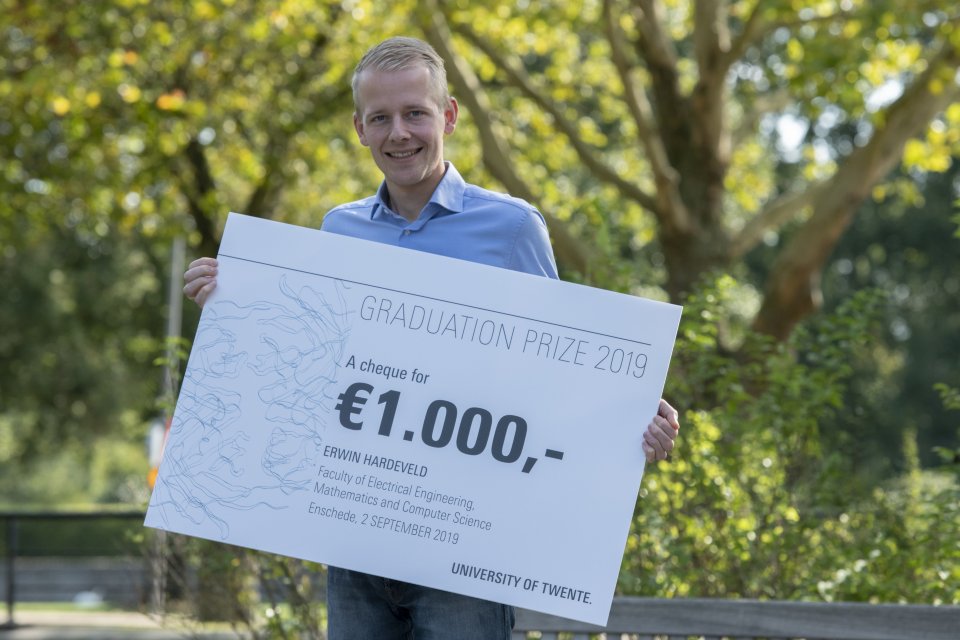 The Graduation Award from the faculty Engineering Technology (ET) was awarded to Henk Koopmans, who finished his master Civil Engineering & Management. In his research he looked at the effect of airport geometry on runway incursions involving the incorrect presence of an aircraft, vehicle or person on the runway. 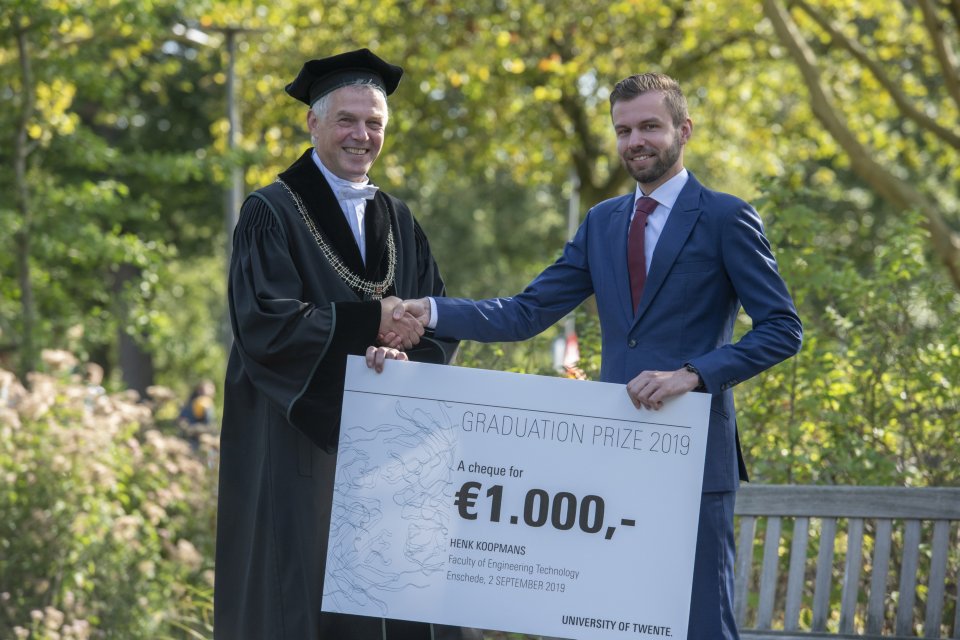 Shashwat Shukla won the Graduation Award of the faculty Geo-Information, Science and Earth Observation (ITC). In his research he uses a combination of advanced remote sensing techniques and the Apollo sciences to propose a novel framework for revisiting the retention of Helium-3 into the surface of the moon. Shashwat did his research for his master in Geo-Information Science and Earth Observation. 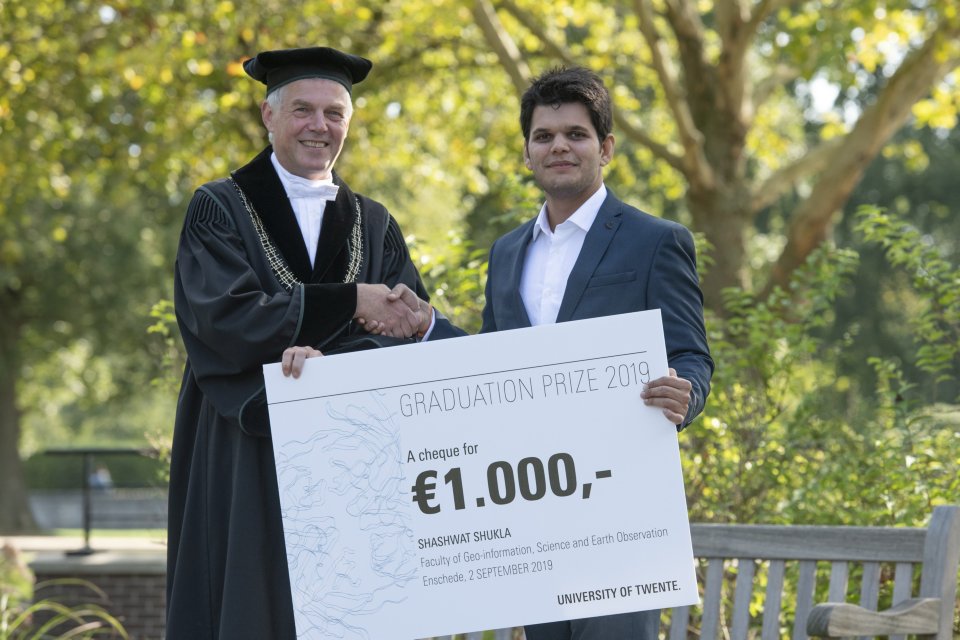 The faculty of Science and Technology (TNW) awarded the graduation Award to Linde Olde Olthof. She research the properties of Majorana particles. Quantum computers, a new type of computer, use these particles to store data. Linde not only investigated the properties using calculations, but also experimentally.

The third Brinksma Innovation Grant (BIG), named after former Rector Magnificus Ed Brinksma, was also awarded during the opening ceremony. Professor in Engineering Fluid Dynamics Kees Venner won the award for his work on TWIN-Teaching, a two-way learning environment in the classroom in which two teachers act in different roles simultaneously. He noticed that teaching together is usually done by sharing the workload without real interaction between the teachers that is visible for the students. The grant enables Venner to spent more time on his proposal, teaching and innovation in teaching.

Unfortunately, two of the prize winners were not able to attend the photoshoot.