In order to keep the brand new electric motor of Electric Superbike Twente at ultimate performance temperature, it will be provided with a metal 3D printed cooling shell, produced by K3D.

Together with K3D, Electric Superbike Twente has developed and produced one of the first 3D metal printed components for the racing industry. The electric motor of the second generation superbike will be water cooled, just like the first superbike that was produced by Electric Superbike Twente in 2018. “The cooling shell of the first superbike consist of multiple parts, which were quite hard to produce, using conventional production methods like turning and milling. For these production methods, lots of material was needed and therefore the end product turned out to be quite heavy”, said Feitse Krekt, Technical Manager of this years Electric Superbike Twente team. “Also the cooling performance was somewhat disappointing. Because of the turning process, the wall thickness needed to be higher than optimal, and we were unable to cool the electric motor as efficient as possible. Therefore we had less power than desired and sometimes needed to slow down to not overheat the electric motor.”

Because Electric Superbike Twente constantly wants to innovate and stay at the top of electric racing, they are designing, developing and building a brand new superbike. “With this years, second generation superbike we wanted to optimize and redesign as much parts as possible. We saw that the cooling shell could be improved a lot by making use of additive manufacturing, for its advantages in functional integration and light-weight production. When looking for a production partner, we found K3D.”

“We were contacted by Electric Superbike Twente in the early stage of their design phase, which gave us the opportunity to guide them in their design for additive manufacturing”, said Jaap Bulsink, CTO of K3D. “We are very experienced with 3D metal printing and are always looking for opportunities to share this knowledge, especially when we are able to do so in such an awesome project as building an electric superbike.” 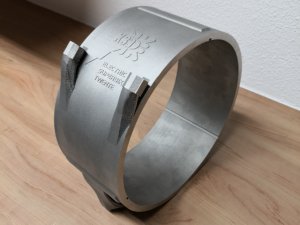 Because the part could be specifically designed for 3D printing, the options were limitless. Bulsink: “The part has an optimal cooling performance due to the thin walled design with internal channels on the right spot. This was only possible with 3D metal printing where you have optimal freedom of design. On top of this the part had been designed for minimal weight. The part was printed first time right and is very accurate and can be used directly without any postprocessing.”

The uniqueness of this 3D metal printed part also lies in the dimensions. “We have seen more cooling shells for race applications that were made with additive manufacturing, but these parts were at least 4 times smaller”, adds Bulsink.

Now that almost all parts for the new superbike are produced, the superbike will be assembled. After that, the team will test its brand new masterpiece, including the cooling system. “With innovations like this, it is always exciting to see if and how it works out, but we are already convinced that this 3D metal printed cooling shell is an utter most awesome piece of technology”, concludes Krekt.

The new superbike of Electric Superbike Twente will be revealed at the 24th of May, at the Kinepolis in Enschede. 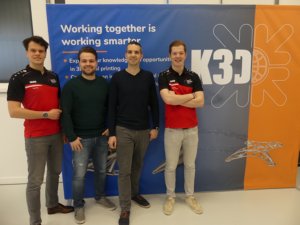