A novel algorithm, developed by University of Twente PhD candidate Phillipp Fanta-Jende, improves the accuracy of surveyed mobile mapping imaging products. It can compensate for measurement errors introduced from erroneous satellite-based positioning usually occurring in urban areas. The novel technique is cost-efficient compared to traditional methods – which require a lot of manual labour – while enabling a comparable accuracy in the low-decimetre range.

Mobile mapping includes all forms of geospatial data acquisition using a mobile platform carrying one or more sensor systems. One of the most known uses of mobile mapping is Google Street View, where a car with a 360°-camera mounted on its roof is used to map all streets of the world.

Urban areas often request the use of mobile mapping but are maybe the most difficult areas to map accurately. To make mobile mapping work, the system needs a direct line of sight with multiple navigation satellites to always know its exact location. In urban areas, this can become a problem because tall buildings can block the signal, making the data less accurate.

To make the acquired data more accurate, University of Twente PhD candidate Phillipp Fanta-Jende developed an algorithm that uses aerial images – which are widely and often freely available – to correct the initial data. “One of the major problems I tackled in my thesis, is the dramatic perspective differences between the data sets of aerial images and mobile mapping”,  says Fanta-Jende. The algorithm has to recognise objects – such as road markings – from an overhead view (aerial imagery) but also a street view (mobile mapping). Identified objects are used to establish thousands of links between the data sets which enables a mathematical procedure to correct the mobile mapping data.

Fanta-Jende’s algorithm not only works with aerial images made from a right angle; it is also able to use oblique images. This is especially useful in urban areas where there is not always a direct line of sight to the road straight from above because of vegetation or where no distinct features on the road are present at all.

For his research, data from the city of Rotterdam was used as a test area as it offers a typical urban canyon scenario with a great number of high-rise buildings. In the tests, an accuracy of 10 – 20 centimetres was reached from initial errors up to one metre. The accuracy was confirmed by more commonly used techniques that require manual labour. 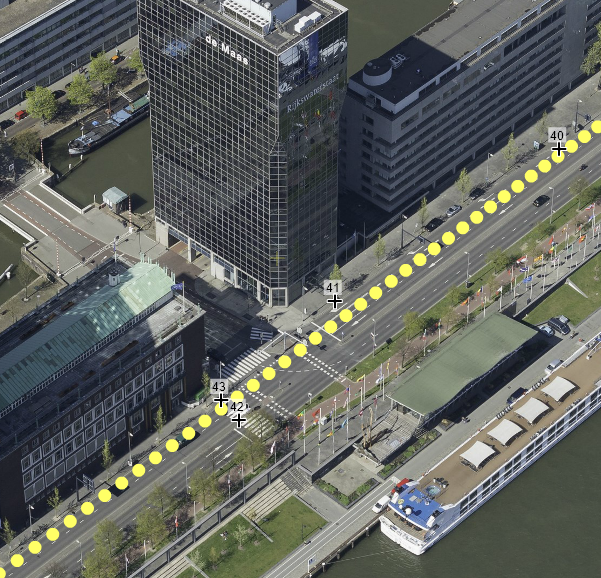 Further development of this technique happens at affiliated companies such as Cyclomedia and Fugro. The work can be extended towards real-time processing and used for related fields, such as autonomous driving or drones.

Phillipp Fanta-Jende is a PhD student in the Department of Earth Observation Science (EOS). His supervisor is prof.dr.ir. M.G. Vosselman from the Faculty of Geo-Information Science and Earth Observation (ITC). The research is funded by the Dutch Technology Foundation (TTW) and is conducted in close cooperation with a user committee consisting of private companies – CycloMedia, Fugro, Slagboom en Peeters and Topcon – as well as governmental agencies – the Dutch Kadaster and Het Waterschapshuis. The public defence of his PhD thesis will take place on Wednesday 20 November 2019. A digital version of his PhD thesis, titled Position Estimation of Mobile Mapping Imaging Sensors using Aerial Imagery, is available on request.