An oil droplet that is placed on a very cold fluid surface, will start moving and keep on moving in straight lines, for many minutes. Even if the drop, initially at room temperature, freezes, this movement continues. This is, in fact, the inverse version of what happens when a drop of water moves on a very hot surface, the so-called Leidenfrost effect. About this remarkable ‘cold version’ of the well-known effect, researchers of the MESA+ Institute of the University of Twente publish in the Proceedings of the National Academy of Sciences (PNAS).

Droplets of water will, placed on a very hot surface, not evaporate quickly but they hover on a ‘cushion’ consisting of their own vapour. This is known as the Leidenfrost effect, it has led to much research after it was first described by Johann Gottlob Leidenfrost in the 18th century.  But what will happen to a droplet on a very cold surface, instead? On top of a bath of liquid nitrogen (minus 196 degrees Celsius), UT researcher Anaïs Gauthier, placed a droplet of ethanol or silicon oil. The droplet is at room temperature. It doesn’t freeze instantaneously, but starts moving after a few seconds. It keeps on moving in straight lines for a long time, up to tens of minutes. Whenever it approaches the wall of the fluid container, it bounces elastically.

Gauthier’s research shows that again, like in the Leidenfrost effect, a layer is formed on which the droplet starts moving. In this case, it is not the bottom layer of the droplet but the top layer of the fluid surface that changes shape. There is a layer of vapour between the cold surface and the oil.  But still, this doesn’t explain why the droplet starts moving. There should be some kind of onset for this. Images, simulations and calculations show that the layer between surface and droplet shows an asymmetry. This is the ‘push’ starting the movement, the speed can be adequately predicted using the models. What happens at the walls of the fluid container, is clearly not a collision as this would slow down the droplet very fast. Between the wall and the droplet, the same type of ‘cushion’ layer is formed, keeping the movement going. 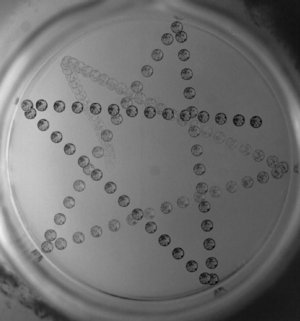 Trajectory of the ethanol droplet in the video.

Further research should clarify what is the cause of the asymmetry. And a very interesting question is what happens if more droplets are placed on the surface. “This spontaneous movement could be applied for cooling down and transporting chemicals or biological materials without contamination”, according to Anaïs Gauthier.

The research has been done in UT’s Physics of Fluids group, part of the MESA+ Institute.

The paper ‘Self-propulsion of inverse Leidenfrost drops on a cryogenic bath’, by Anaïs Gauthier, Christian Diddens, Rémi Proville, Detlef Lohse en Devaraj van der Meer is published in the Proceedings of the National Academy of Sciences of the USA (PNAS) of 7 January, 2019.