Photonics and radio signals join forces for high-speed mobile data communication, like in 5G communications. At the same time, the applications of ‘integrated microwave photonics’ go way beyond telecom. This progress often comes from directions you would not expect in the first place. University of Twente researcher David Marpaung (MESA+ Insitute), for example, works on a combination of light and sound waves, enabling him to design high-quality filters. In a review paper in Nature Photonics, he gives a vision on the next phase of photonic chips, for example in brain-inspired, ‘neuromorphic’ optical computing.

Soon, a single type of photonic chip - a chip that processes light instead of electrons - can’t do the job by its own, is David Marpaung’s expectation. The trend is: find smart combinations of materials and tools, then integrated microwave photonics can really make the difference. His own research is about the combination of light, radio frequency, and acoustic waves. Photonic chips will convert radio signals into light that works at much higher frequencies. In this way, a fast optical link is possible between two base stations for mobile wireless communication. At radio frequencies, however, very precise filtering is possible for selecting the specific part of the crowded radio bands. As soon as the radio signal is converted into light, filtering is more complicated as light, in fact, travels too fast. There, acoustic waves come in: they are capable of slowing down the light, so filters can be designed in the optical domain, that are sufficiently selective. This is called ‘stimulated Brillouin scattering’, for which Marpaung received a Dutch NWO-vidi research grant. 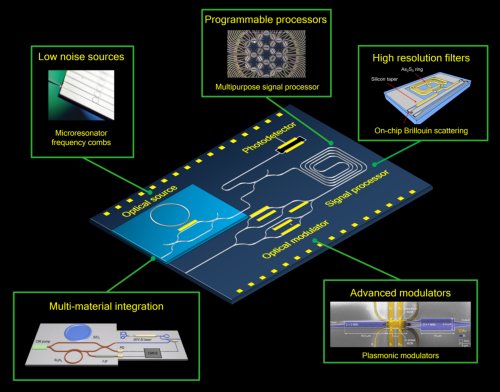 In photonics integration, several materials and tools will come together for the best result, David Marpaung foresees.

The paper David Marpaung wrote together with experts Jianping Yao of the University of Ottawa and Jose Campany of the University of Valencia, is a broad vision of the future and a plea for finding creative combinations. At this moment, the three main materials for photonics are silicon nitride, indium phosphide and silicon-on-insulator, each of them with its specific advantages. The future is about ‘hybrid systems’ employing combinations of materials and technologies: recent UT work already shows integrating photonics and CMOS electronics, which has the advantage of a mature and very large-scale production technology. Solutions also come from micromechanics. Instead of employing several lasers for one photonics chip, consuming a lot of space and energy, a comb-like structure of ‘microresonators’ can do the job.

Thanks to these developments, in which several disciplines meet, microwave photonics can be developed way beyond its origin of telecom and signal processing. Using basic photonics components like ‘Mach-Zehnder interferometers’, enabling logic operations with light, very flexible photonic processors can now be developed, that can be reconfigured for specific applications. Marpaung currently develops such advanced technologies with University of Twente spinoff LioniX. The University of Twente has a cluster of researchers working in photonics, called Applied Nanophotonics, part of the MESA+ Institute.

New application areas include optical quantum computing and brain-inspired, ‘neuromorphic’ computing: can we translate the ‘spikes’ in our brain, neurons that ‘fire’, into a photonic processor, thus mimicking how our brain works? Again, combination of technologies and materials will be key to success. 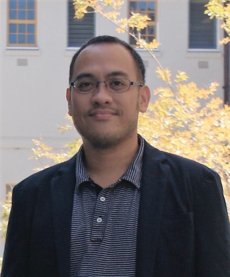 David Marpaung (1979) did his PhD at the University of Twente in 2009. He then worked at the University of Sydney until 2017 and returned to Twente as an associate professor last year. Within the Laser Physics and Nonlinear Optics group of the university, he has a group of his own focusing on Nonlinear Nanophotonics and advanced signal processing.