Soon, your shirt or sweater will be able to give you touch feedback, during physical exercise. Or it may give you the feeling of remotely controlled touch. This is not done using a device attached to the garment, but by using a ‘textile muscle’ that is interwoven in an invisible and comfortable way. In a new European project, led by the University of Twente, clothing will be made smart. The kick-off is 23 and 24 January in Twente.

A sweater that briefly touches you: it is already possibe, maar until now, sensors and actuators are used that are attached to garments. They are very visible devices, they reduce comfort of wearing, they vibrate or even are noisy. Now what will happen if we make parts of the yarn of which the garment is made, active themselves? These smart parts will be able to contract like a muscle, in a way the user feels a light touch. Let the garment be the actuator itself, is the idea behind the new project WEAFING: Wearable Electroactive Fabrics Integrated in Garments.

“We foresee applications in exercise, learning new movements during sports or work, but it can be used at a social and emotional level as well”, projectleader Dr Angelika Mader explains. “Even at a large distance, wearing this garment, you can feel social proximity thanks to the touch. It would be great if we can mean something for visibly impaired, for example. And of course, you can also think of haptic feedback in gaming and entertainment.” Angelika Mader is a staff member of the Human Media Interaction group at the University of Twente.

From textile technology to human perception

It all starts with designing yarn that is electroactive. That will be done at Linköping University in Sweden – a UT partner within the European Consortium of Innovative Universities (ECIU). There, they have developed polymers that contract and expand upon the application of a potential. Yarns with these ‘electroactive polymers’ resul in actuators.  Chemists of the University of Cergy-Pontoise France, will develop an ionic gel  to support the electroactive yarn enabling operation in air. One of the conditions is that the polymeric gel cannot be too sticky, because the yarn needs to be further mechanically processed during the subsequent textile production. This is done at the University of Borås, Sweden, where the yarn is woven or knitted into advanced fabrics. The woven or knitted patterns make up for a large part of the design of the contractions, the so-called textile muscle. 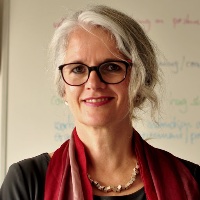 The control mechanism of the textile muscle and the distribution of pressure is developed at the University of Twente, the Netherlands. Together with research in the perception of textile touch on the skin, these researchers will be able to lay the foundation for our future smart clothing. Elitac will develop a demonstrator garment incorporating the research results from the other partners. The role of Wearable Technologies is to communicate results to communities of interest, and to identify application cases that guide the prototype development

The research project, with a budget of almost four million euros, starts during a kick-off meeting at 23 and 24 January, in Twenteand runs until August 2023. The project partners are University of Twente (coordinator), Linköpings Universitet (Sweden), Universite de Cergy-Pontoise (France, Northeast of Paris), Högskolan i Borås (Sweden), Elitac Systems BV (the Netherlands, Utrecht), and Wearable Technologies AG (Germany, Munich). The research project is funded by the Horizon2020 program of the EU, grant nr 825232.