Researchers at the Thorax Centrum Twente of Medisch Spectrum Twente (MST) and the University of Twente have recently completed their fourth major study into the application of drug-eluting stents during percutaneous coronary intervention. In what was known as the BIONYX study, two stents of the latest generation were used in order to gain understanding of the application and continued refinement of stents. 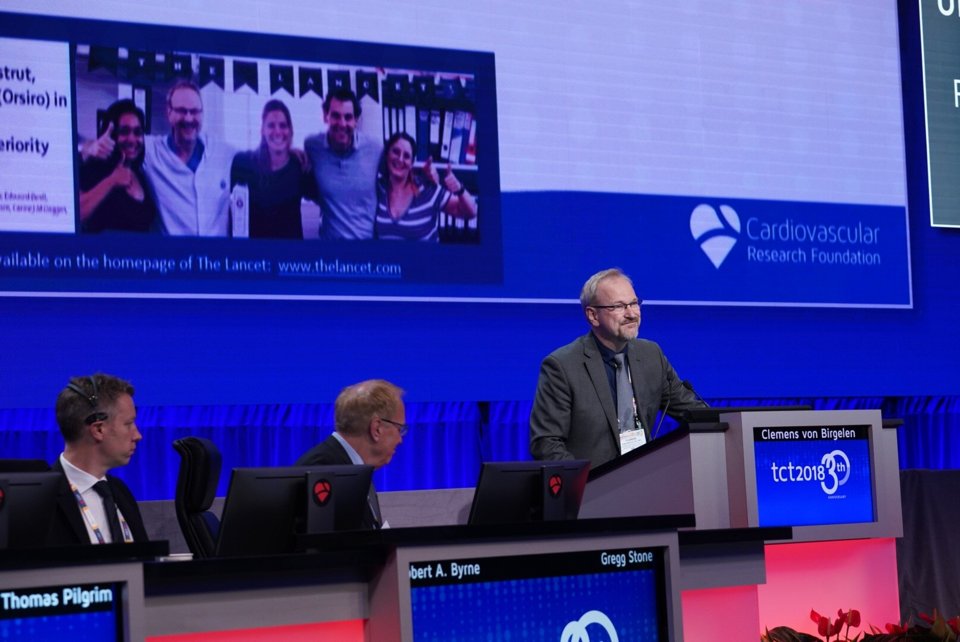 The results were presented by Professor Clemens von Birgelen at the Transcatheter Cardiovascular Therapeutics conference (TCT) in San Diego, the largest conference for interventional cardiologists in the US. The results were simultaneously published in the medical journal ‘The Lancet’. Remarkably, this is the third successive Twente-based stent study to have been published in this renowned academic journal.

Application of stents during heart attacks and in narrowed blood vessels

Every year, millions of patients receive minimally invasive treatment from specialist cardiologists following a heart attack or for serious narrowings of their coronary arteries. This involves the insertion, via a minuscule entry point in the blood vessels of the wrist or groin, of stents into the coronary arteries. The stents are made of very thin metal wire mesh, covered by an even thinner layer that elutes a drug. Stents are developed to keep previously narrowed blood vessels open after the percutaneous coronary intervention.

In recent years, more and more new stents have been developed that have gradually improved the results of this intervention. Professor von Birgelen, who is associated with the MST in his capacity as a cardiologist and is the holder of the Chair of Interventional Cardiology in the department of Health Technology and Services Research at the University of Twente, explained: “Over the years we have made great progress regarding both the technological development of the stents that are available on the market and the way in which they are applied in clinical settings. We have now reached the point where the number of complications has been reduced to a minimum. Within twelve months after their treatment, 97 percent of all patients required no further intervention in the coronary arteries into which stents had been implanted.”

Almost 2500 patients in the Netherlands, Belgium, and Israel took part in the research, which was only recently completed. About one third of these patients were treated in the MST. During their treatment, one of the two different modern drug-eluting stents was inserted. The results of both stents were very encouraging, with very little difference between them: “It is essential that the results from the new stents are studied very carefully. This type of very large-scale research project is quite unique. With the information from such large-scale studies, there is more we can do than simply compare the results of the two stents. For years now, researchers in our group have been examining heart disease in women and in patients with previously undiagnosed diabetes,” says Von Birgelen.

The willingness on the part of patients to take part in these studies is very important, believes the cardiologist. “At the end of the publication in The Lancet, we wrote a word of thanks to the patients who took part - thanks for their trust and for their willingness to be part of the research and to help science progress. The oldest patient who participated in BIONYX was 96 years old. In practice, we often help older patients, but there are not many studies that allow older and very old patients to participate.”

The cardiologists in Enschede regard scientific research as extremely important: “It is thanks to such randomized studies, where independent researchers observe and verify the outcomes (in the most recent study, the experts were from Amsterdam and Zwolle), that we gain important insights into the benefits of new and promising technology, and that enables us to optimize how it is applied. In recent years, researchers have succeeded in reducing to a minimum the discomfort for patients caused by the intervention, in increasing the chances of successful outcomes, and even in lowering the costs of treatment. And the meticulous registration of treatment and of the results keeps everyone on their toes, and ultimately every patient benefits from this.”

The research team has a long tradition of applying and assessing new stents. Under the leadership of Professor von Birgelen, four stent studies have been launched in the past ten years - these have become known in cardiology circles as the ‘TWENTE studies’. The studies involved more than 9000 patients. Last week in the MST, the latest study - the COASTLINE study - saw the inclusion of its first patient.

Von Birgelen says, “We always make carefully considered choices when initiating a new study. As a result, we have been able to get stents of exceptional quality and achieve outstanding outcomes. Indeed, studies of this kind have to meet the highest quality requirements. That in turn requires excellent and close collaboration with epidemiologists and other experts from the University of Twente, who help with statistical analyses and with the interpretation of the results.”