Turbulence in oceans, in the atmosphere or in industry, is billions of times stronger than in lab experiments. Simply upscaling the lab results is not an option. Theoretically, however, there is a regime of turbulence in which scaling laws apply. Researchers of University of Twente succeeded in reaching this ‘asymptotic ultimate regime’ of turbulence, by introducing roughness at the surface at which turbulent liquid flows. They present their findings in Nature Physics of February 12.

A better understanding of turbulence is one of the grand challenges of physics. Turbulence is everywhere: in industrial processes, in atmosphere, in flows around ships or planes. The Reynolds numbers – the measure for the strength of turbulence – that can be achieved in the lab, are much smaller than in those real-life processes. When measuring heat flow in the lab at weaker turbulence, the values can’t be simply extrapolated to the higher Reynolds numbers in nature or industry. There is, however, a well-known theory that tells us more on Reynolds numbers that are infinitely high. This is a theory dating back to 1962, and that led to numerous discussions since. According to this theory of Robert Kraichnan, who was Albert Einstein’s last assistant, there is an ‘asymptotic ultimate regime’. In this regime, upscaling is possible. Even better: the regime can now be reached at Reynolds numbers that can be achieved in the lab. This is a new and indispensable link between theory and practice. 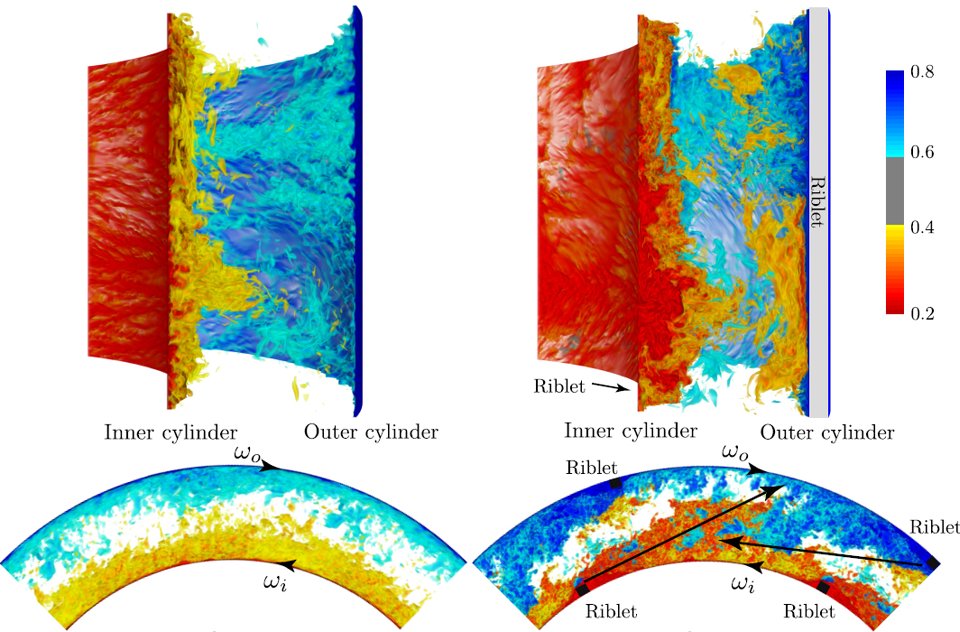 Turbulent flow between two rotating cylinders (Taylor-Couette), on the left the side and top views of the situation without surface roughness, on the right riblets introduce surface roughness. This causes a major change, not only at the surface of the rotating walls, but in the flow pattern as a whole. 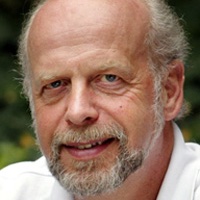 The scientists, of the Physics of Fluid group of Prof Detlef Lohse, succeed in doing so, by introducing roughness to the surface. The fluid flow at the surface is altered in this way. For measuring turbulent flow, the group has its ‘Twente Turbulent Taylor-Couette’ setup, in which turbulent flow can be generated between two cylinders rotating independent of each other. The flow close to the wall is very interesting: at lower Reynoldsnumbers, the flow is turbulent except for the boundary layer, where it still is laminar. Moving towards higher Reynolds numbers, the flow as a whole will be turbulent. Introducing ribs to the surface, the flow at the wall drastically changes and a situation is created that normally would only happen at much stronger turbulence. Simulations, by PhD student Xiajue Zhu, and experiments by his colleague Ruben Verschoof, are complementary in this. The advantage of simulations is that you get detailed information of the flow speed at any given point, while experiments can be done at higher Reynolds numbers.

Impression of the Twente Turbulent Taylor-Couette setup at work; a unique and powerful facility for experiments on turbulence

This decisive step is the result of years of simulation and experiments. Simulating turbulent flow requires huge computing power. A simulation on a single computer would take 10 million hours or 1140 years. The researchers therefore used supercomputers across Europe, so 2000 processors could do the job in parallel. The experiments are equally demanding and at the very limit: the Taylor-Couette setup, which is the largest and most advanced machine of its kind, has engines that consume 20 kilowatts of energy, while an additional 20 kW is needed to cool down the setup.