Thanks to a laser technique that ejects ultra-tiny droplets of metal, it is now possible to print 3D metal structures, not only simple ‘piles’ of droplets, but complex overhanging structures as well: like a helix of some microns in size, made of pure gold. Using this technique, it will be possible to print new 3D micro components for electronics or photonics. University of Twente scientists publish their new results in the Additive Manufacturing journal.

By pointing an ultra-short laser pulse onto a nanometer thin metal film, a tiny metal droplet melts, it is ejected to its target and solidifies again after landing. Thanks to this technique, called laser-induced forward transfer (LIFT), the UT researchers are able to build, drop by drop, a structure with copper and gold microdroplets. The copper acts as a mechanical support for the gold. In their paper in Additive Manufacturing the researchers show, for example, a printed helix: this could act as a mechanical spring or an electric inductor at the same time. This helix is printed with copper around it: together with the helix, a copper ‘box’ is printed. In this way, a droplet that is meant for the new winding that is printed, is prevented from landing on the previous winding. After building the helix, drop by drop and layer by layer, the copper support box is etched away chemically. What remains is a helix of pure gold, no more than a few tens of microns in size. 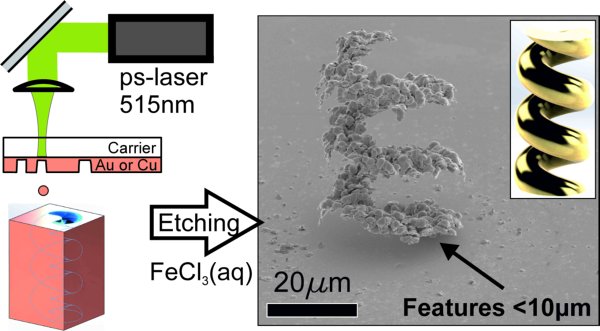 The laser printing technique: by printing copper and gold in turn, the gold helix initially is surrounded by a copper box. Etching the copper away, results in a free standing helix of pure gold. 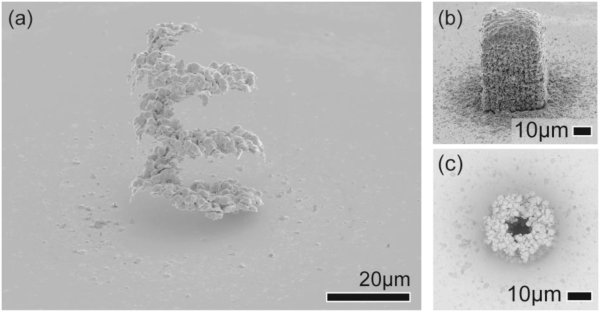 Top view (c) of the helix shows that it is threedimensional with a center void. In (b), it is still in the copper box

The volume of the metal droplets is a few femtoliters: a femtoliter is 10-15 liter. To give an impression, a femtoliter droplet has a diameter of little over one micrometer. The way the droplets are made, is by lighting the metal using an ultrashort pulse of green laser light. In this way, the copper and gold structure is built. A crucial question for the researchers was if the two metals would mix at their interface: this would have consequences for the quality of the product after etching. Research shows that there isn’t any mixing. The way a structure is built, drop by drop, results in a surface roughness, which is only about 0.3 to 0.7 microns. 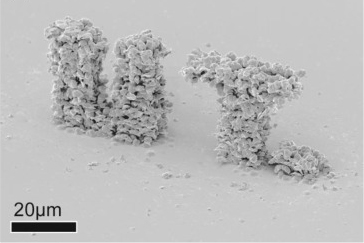 The abbreviation 'UT.' (University of Twente) 3D printed in gold

The LIFT technique is a promising technique for other metals and combinations of metals as well. The researchers expect opportunities for materials used in 3D electronic circuit, micromechanic devices and sensing in, for example, biomedical applications. It therefore is a powerful new production technique on a very small scale: an important step towards ‘functionalisation’ of 3D printing.

The paper ‘Printing of Complex Free-standing Microstructures via Laser-induced Forward Transfer (LIFT) of Pure Metal Films’ by Matthias Feinaeugle, Ralph Pohl, Ton Bor, Tom Vaneker and Gert-willem Römer will be published in the December print edition of Additive Manufacturing and is available as from now.