White LEDs can be made even more efficient and powerful, photonics researchers of the University of Twente and Philips Lighting now prove. They found a detailed way for describing the light that stays inside the LED by absorption and scattering. This is very valuable information for the design process.

From relatively weak light sources to strong lights at home and in cars, for example : since the blue and white LED were invented, we’ve seen a rapid development in possible applications. Low energy consumption and long lifetime are major advantages over existing lighting solutions. White LEDs consist of a semiconductor emitting blue light, with on top of that phosphor plates that turn the blue light into yellow. What we see then, is white light. The light will be scattered by the phosphor particles, but part of it is absorbed as well. What part of the light will exit the LED, is not easy to predict. Unless you look at absorption and scattering in another way, according to Maryna Meretska and her colleagues. Theory from astronomy helps.

What makes good prediction particularly difficult: some of the light is absorbed, but re-emitted in another colour. One way is trying to define all possible light rays, and use a lot of computing time to get a result. This doesn’t give much insight in what is actually happening. A theory that is often used for light propagation in a LED, is diffusion theory. In strongly absorbing media, however, this approach isn’t valid anymore. Meretska therefore has built a setup to collect all the light around the phosphor plates, in the whole visual spectrum. Based on this, absorption and scattering can be deduced using the radiative transfer equation, well known in astronomy. This results in a full description of light propagation inside and outside the phosphor plates. Compared to a description using diffusion theory, the absorption level is up to 30 percent higher. At the same time, the method is about 17 times faster than the numerical approach. 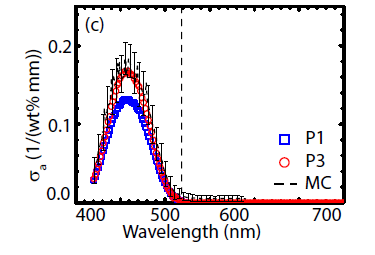 Absorption: blue is based on diffusion theory, red is the new method, black is a numerical 'Monte Carlo' check.

These new insights, and their level of detail, can lead to powerful and predictive tools for LED designers. They help in further improving the efficiency.

The research has been done in the Complex Photonic Systems group of UT’s MESA+ Institute for Nanotechnology, together with Philips Lighting in Eindhoven. The University of Twente has a strong concentration of research groups and facilities in the rapidly growing field of photonics.

The paper ‘Analytical modeling of light transport in scattering materials with strong absorption’ by Maryna Meretska, Ravitej Uppu, Gilles Vissenberg, Ad Lagendijk, Wilbert IJzerman and Willem Vos, will appear in Optics Express, one of the leading journals of the Optical Society. It is already online.