Today’s aircraft engines are cleaner and consume less fuel. The downside is that reliability suffers from vibrations caused by ‘thermoacoustics’. A European project, led by Jim Kok of the University of Twente aims at better performance using machine learning.

Cleaner and energy efficient aircraft engines are a top priority: air traffic is expected to grow for the next decades, while Europe introduced strict emission targets in ‘Flight Path 2050’. Lower emission of nitrogen oxides can be reached by operating the combustor of the engine at high pressure and with a high air-to-fuel ratio. This ‘lean’ approach works well, but thermoacoustics can cause serious problems: this type of combustion may cause pressure oscillations influencing the reliability and lifetime of the engine. Although a lot of research effort was done, this is still badly understood and hard to prevent.

Together with the major engine manufacturers like Rolls Royce, SAFRAN and General Electric, a number of European universities now start a European research project on better understanding of thermoacoustics, for design of better combustors. The project is coordinated by dr. Jim Kok of the University of Twente. He is an expert in ‘turbulent combustion in gas turbines’ at the UT Faculty of Engineering Technology. 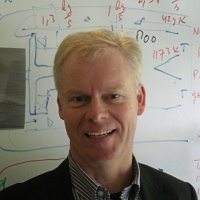 The new approach is machine learning. Jim Kok: “The current models we use for engines, perform well on a lab scale. But in a real-life jet engine, we see many more parameters and huge variations in operating circumstances. Machine learning takes the engine data back to the lab. A modern engine collects about a terabyte of data a day. By feeding our models with this, they can ‘learn’ how to perform better. This is a typical Industry 4.0 approach.”

The Thermal Engineering group at the University of Twente, of which Jim Kok is a member, does research on gas turbines: turbulent and instable combustion, thermoacoustics and biofuel applications are some of the research topics of the group. Earlier on, Jim Kok led the European LIMOUSINE project, which was also about thermoacoustics.

The project MAGISTER (Machine learning for advanced gas turbine injection systems to enhance combustor performance)  is a Marie Skłodokowska-Curie programme of about four million euros for four years. Fifteen PhD students will work on it, the project is a so-called ‘Innovative Training Network’ for a new generation of researchers working in an international setting.