A student from the University of Twente and an Indonesian PhD-student are helping to clean up one of the world’s most polluted rivers, the Citarum River in Indonesia.

Dutch student Kees van Ginkel is playing an active role in a major anti-pollution drive on West Java. He spent five months on Java looking for sources of water pollution in the Citarum river basin around the city of Bandung, working with the local people and scientists from Bandung Institute of Technology (ITB). The Citarum river basin is one of the most polluted river basins in the world.

Cleaning up the Citarum River is essential to the future of Indonesia, as the river is the main freshwater supply for the sinking city of Jakarta. Indonesia is currently engaged in a national debate about the construction of a huge dam off the coast of this sprawling metropolis. This Garuda dam is essential to Jakarta’s struggle against the encroaching water, but there is a very real danger that the resulting lake will turn into a filthy expanse of waste water. 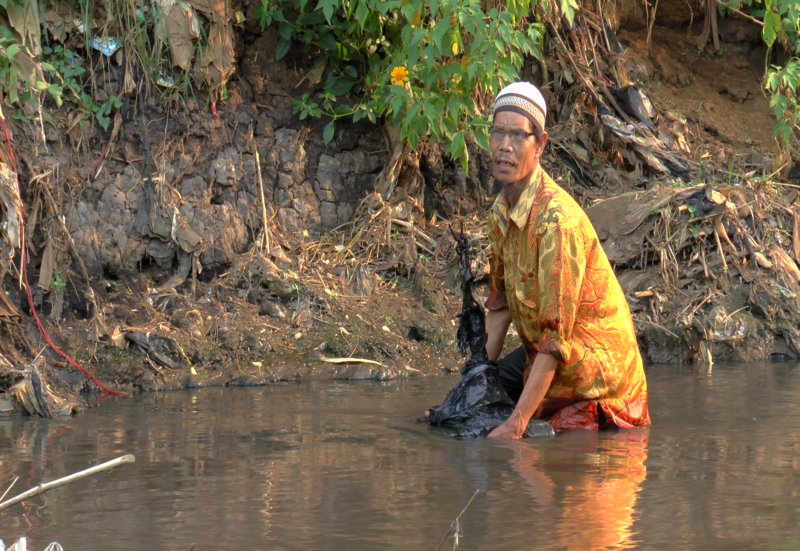 “My first step was to clarify the problem,” Van Ginkel explains. “There are many sources of pollution and all kinds of opinions about who is responsible. People are inclined to pass the buck. I carried out a preliminary study and collected and analysed data, a process that included interviewing stakeholders on the spot. My contribution is part of a larger project in cooperation with the Indonesian government and aimed at improving water quality. The solution does not simply lie in implementing a handful of technical interventions but also in addressing the social and administrative issues. Factories and farmers discharge their waste products and manure in the water, while the population also dump their household waste.”

In the course of his research, Kees discovered that a great deal of data on water quality and pollution is already in the hands of the Indonesian government. “In that respect, the main question was exactly what data is being collected, and by whom. Indonesia has gone through a process of far-reaching government decentralization. I analysed the available data, a process that involved linking data on water quality to satellite images of the area. This will enable Indonesia to carry out more effective research into public health and governance.”

In addition to collecting and analyzing data, Van Ginkel also spent a good deal of time with his feet in the mud. Working alongside the local population, he placed sensors to measure the water quality in the Citarum basin. He travelled to many places in the river delta to discuss pollution with residents and provided training on water quality.

Van Ginkel saw with his own eyes just how serious the problem is. One particularly alarming example is the small industrial town of Majalaya. “The textile mills there are located among the rice fields and houses, and they turn the river all the colours of the rainbow. Heavily polluted water is discharged directly into the river at hundreds of different locations. Surface water (i.e. water from the river) is used to irrigate rice fields and the local kids swim in it. Eventually the surface water infiltrates the groundwater, which means heavy metals find their way into the wells of Majalaya. Water from these wells is used for washing clothes and sometimes even for cooking. This came as a real shock to me. It’s nothing short of an ecological disaster. Even if we were to clean up the river overnight, the problems would still drag on for years because the pollutants attach to the sediment on the river bed.”

Kees van Ginkel studies Water Engineering and Management at the University of Twente in the Netherlands. His thesis is entitled Water quality in the Bandung Basin - Towards a better understanding of the water quality in the Upper Citarum River Basin. His research is part of the international Alliance for Water, Health and Development. This joint venture includes Radboud University Nijmegen, the Dutch water institute Deltares, Bandung Institute of Technology (ITB) and the University of Padjadjaran (also in Bandung). Kees worked closely with an Indonesian PhD student from ITB and was supervised by Dr Denie Augustijn of the University of Twente and Dr Gertjan Geerling of Radboud University. For his work on this project, Kees won the prestigious 2016 Water Network Thesis Award for students in the Netherlands.

During his time in Indonesia, Kees van Ginkel produced a number of video blogs (subtitled in English). They document his progress as he travels around the Citarum river basin in search of the sources of pollution.
Click here to view these popular reports.