Using ‘Raman’ optical technology, scientists of the University of Twente, can now produce images of brain tissue that is affected by Alzheimer’s disease. The images also include the surrounding areas, already showing changes.

Alzheimer’s disease is associated with areas of high protein concentration in brain tissue: plaques and tangles. Raman imaging is now used to get sharp images of these affected areas. It is an attractive technique, because it shows more than the specific proteins involved. The presence of water and lipids, influenced by protein presence, can also be detected. Using this technique, the researchers have studied brain tissue of four brain donors, three of them with Alzheimer’s disease. 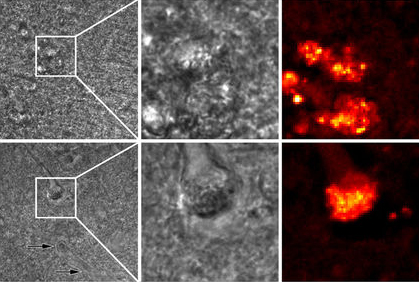 The high-lighted squares (left) are the 30 by 30 micron areas in the middle and right images (upper: plaque, lower: tangle)

The affected area can, in this way, be shown in a sharp and clear way. After image processing, even an area appears that is in transition between healthy and affected tissue: this may give an indication how the disease is spreading in the brain. Even in the brain tissue of the healthy person, a small area is detected with protein activity. This can be a first sign of a neurodegenerative disease.

Raman microscopy uses a laser beam for the detection of chemical substances. The energy of the reflected and scattered light gives an indication of the substances present in a sample. In each of the four brain samples, 4096 spectra were examined in this way. A major advantage of Raman is that the chemicals don’t need a pretreatment, it is ‘label free’. In chemical analysis, Raman has proven to be a powerful technique. 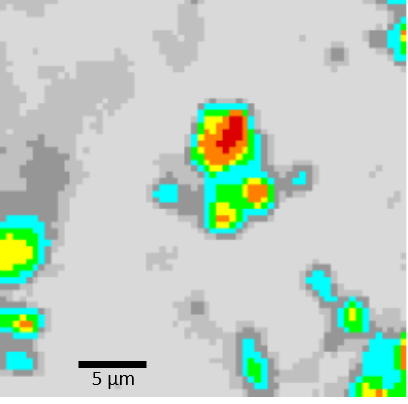 Smaller than a cell

In this case, Raman was used to examine brain tissue outside the body, but it could even be used ‘in vivo’ for detecting specific areas during surgery. Compared to MRI, PET and CT imaging, Raman is able to detect areas, smaller than cells, with very high precision. In this way, it can be a very valuable extra technique. The Raman images now show protein activity at neural cell level, but the sensitivity is high enough for detecting areas that are even smaller – as is the case with the brain sample of the healthy person.

Cees Otto, of the Medical Cell Biophysics group of UT, published his work in Scientific Reports, together with colleagues from Leiden University and from Spain and Austria.