How do pedestrians act at an intersection when coming across an autonomous car? It is one of those challenges to overcome for researchers and car manufacturers in their strive to develop an autonomous vehicle ready for widespread use in everyday life. 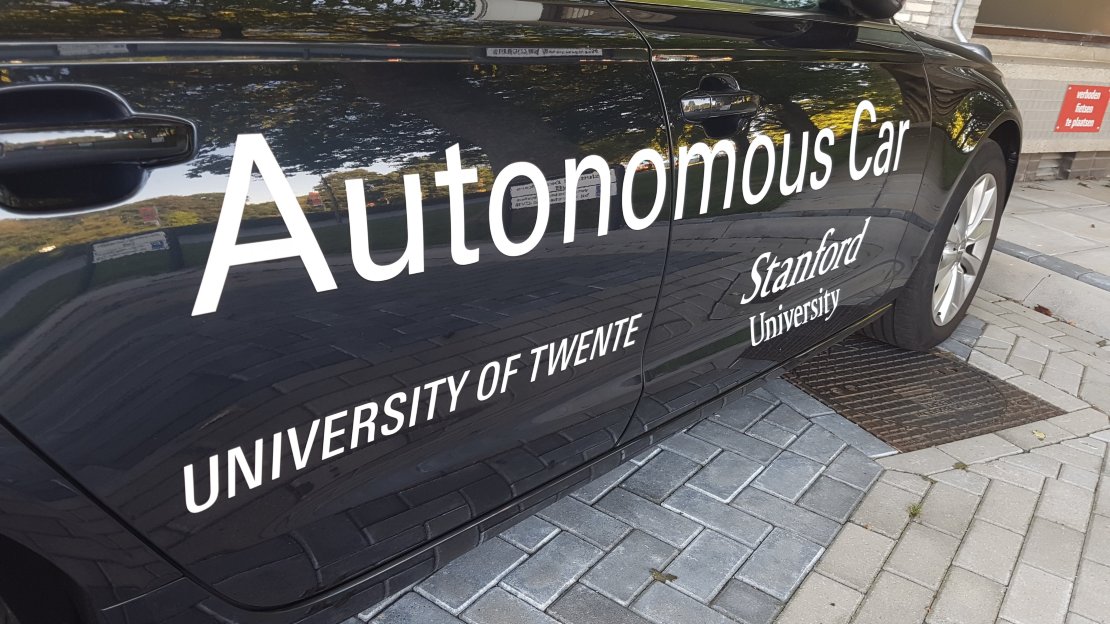 Researchers of Stanford University spent three days experimenting at the University of Twente (UT)’s campus to see how unsuspecting pedestrians deal with a car without a driver behind the steering wheel.

The experiment at the UT is a recurrence of a previous experiment the researchers conducted in the Silicon Valley area. There, they observed how local pedestrians behaved in their communication with an autonomous vehicle and how they perceived the situation. “But it is interesting to find out if our observations in the US are generic or hold a local or culturally determined component”, David Sirkin, who is a Lecturer and Research Associate at Stanford’s Center for Design Research, states. “We intend to hold this experiment in a few places around the world to draw valid conclusions on our findings how humans communicate and behave towards autonomous vehicles.”

For a couple of days, the car of University of Twente’s Rector Magnificus Ed Brinksma was transformed for the experiment. While the University of Twente hosts its summer school festival CuriousU, over 250 students on campus are being used as unsuspecting participants in the experiment. Sirkin: “CuriousU is a great opportunity to run this study, as the population is large enough for a genuine experiment, but not too large to control, and secure a safe execution.”

The situation was captured on video from different angles to observe behavior and pedestrians were asked to reflect on their perception of the situation. Sirkin looks back positively on the experiment at the campus: "People have been very willing to engage with us and talk about their experiences. We've observed interactions that both reinforce our earlier findings, and point in new directions. It was a very productive visit."

As there is no driver to communicate with when dealing with autonomous vehicles, new arrangements need to be set up to agree on how the traffic should move on. What the researchers have seen from previous experiments, is that even though people do know they are dealing with a robot, they ascribe human characteristics to them. They tend to look and gesture towards the front of the car as it were its face.

At the same time, they do show doubts about the ability of the car to act as is required in the situation. They deliberately perform the act of walking, making more obvious gestures and movements to ensure that the autonomous car identifies their behavior as walking in a certain direction. Some pedestrians change their behavior by not taking their priority: rather, they walk around the back of the car, just to make sure they are safe.

Findings like these form valuable input for further design matters for autonomous vehicles, such as improving their interfaces and optimizing their control systems.

The experiment at the University of Twente’s campus is part of a greater research programme on autonomous car interaction at Stanford’s Center for Design Research. The team that led the experiment in Twente consists of David Sirkin, research associate and lecturer, Becky Currano, postdoc researcher, Hamish Tennent, Human Media Interaction (HMI) designer, all from Stanford, working together with the DesignLab and UT researchers David Goedicke and Jamy Li.