Water droplets on a very hot plate don’t evaporate but levitate and move around: this is known as the Leidenfrost effect and it always guarantees beautiful images. For the first time, researchers of the Physics of Fluids group of the University of Twente (MESA+ Institute for Nanotechnology) have made images of the tiny layer beneath the droplet, when it impacts on the surface. Thanks to this images, a more detailed explanation of the phenomenon is possible, the researchers conclude in their publication in Physical Review Letters.

A droplet of water impacting on a plate that is at the water boiling point, will spread and evaporate fast. On a surface that is much hotter, something else happens: the droplet will levitate on top of its own vapor. For this phenomenon to occur, the temperature must have reached the Leidenfrost value. On impact, the levitation is approx. 100 nanometer (a nanometer is one millionth of a millimeter). The UT scientist now found a way to get detailed images of this. “We combine high-speed images with a laser technique called total internal reflection imaging”, PhD student Michiel van Limbeek explains. “Using this laser we can distinguish wet and dry areas: does the liquid touch the surface or, in case of Leidenfrost, doesn’t it at all?”

In this case, ethanol was chosen instead of water. The droplets fall onto a sapphire surface. The researchers distinguish three boiling regimes: contact boiling, transition boiling and Leidenfrost boiling. The TIR-measurements show the wet and dry spots on the surface, thanks to the different refractive index of vapor and ethanol: the laser light is only reflected when it meets vapor. Thanks to the TIR images, more information is obtained about the incident angle and the spreading radius: the different regimes can be distinguished better. In the transition region towards Leidenfrost, for example, the center part of the drop still contacts the surface (wetting) while the outer ring already levitates. 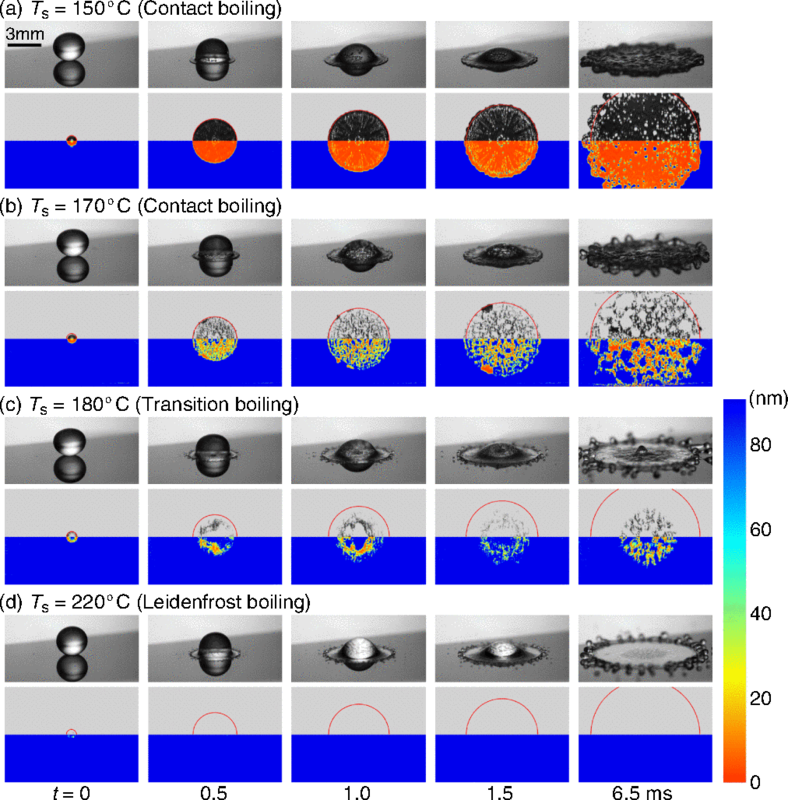 An impacting ethanol droplet at four surface temperatures.The bottom images are made using TIR, the colours show the heights with 91 nanometer as the 'cutoff' height. The video first shows the highest temperature.

A remarkable conclusion is that the droplet is not flat at the bottom, as is often assumed in ‘pancake models’ describing Leidenfrost. The images show the shape of a ring: to be more precise, a combination of a ‘neck’ at the closest distance to the surface and a ‘dimple’ which is further away from the surface towards the center of the drop. This results in a better quantitative description.

The new experiments and theory make it possible to describe the Leidenfrost effect for a wide range of fluids, surfaces and temperature regimes. In many applications where there is heat transfer from solids to liquids this is of great value, like in cooling techniques, engines or more efficient chemical reactors.