For the second year running, Green Team Twente (a group of seven students from the University of Twente) will be taking part in the Shell Eco-marathon Europe. The team wants to crown last year's victory by returning to Twente with another first prize. They will be competing against more than 200 teams of students in a race that is not about speed, but economical driving. On Wednesday 8 May the team will unveil its sustainable hydrogen-powered car, which goes by the name of UTmotive. Anyone with a keen interest in this project is cordially invited to attend the official unveiling ceremony, which kicks off at 16:00.

Green Team Twente won last year's race in the UrbanConcept hydrogen class, with a score of 75 km/kWh. This is equivalent to driving 727.5 km on one litre of petrol. This year, the team are building a car that is potentially capable of driving 1000 kilometres on one litre of petrol. “Using the latest materials and techniques, we’ve managed to keep UTmotive’s weight below 80 kilos!” says Teun Bartelds, the team manager of Green Team Twente. “The conversion of fuel to motion is also super efficient, thanks to an even more fuel-efficient powertrain and custom-made hub motors.” The team is also focusing on aerodynamics and on highly efficient driving strategies. Being powered by hydrogen, the car only emits water vapour, so it doesn’t produce any CO2 or other greenhouse gases.

By choosing to compete in the UrbanConcept class, the team from Twente is showing that their futuristic car is ready for the public highway. For this reason, the vehicle comes equipped with features such as lights, wing mirrors and a windscreen wiper. Each lap includes a mandatory stop at a traffic light, to make the race as realistic as possible. “These requirements involve additional design challenges, but we feel that tailoring newly developed innovations for practical application is a very important aspect of this project.” This is why the team goes on working after the race has ended. “We want to get the car certified as roadworthy by the RDW (the Dutch Road Transport Authority), so that we can take it out for a spin after the race!" 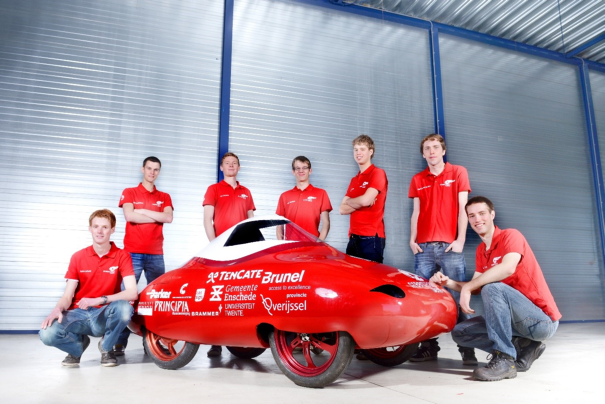 On 8 May, the team will present the new car to the press, its sponsors and anyone else who would like to see it. You are cordially invited to attend this event, which commences at 16:00 in Room 2 in the Waaier building on the University of Twente campus. In addition to the unveiling itself, the programme will feature a technical presentation and a demonstration lap. There will be an opportunity to ask questions during the drinks party afterwards.

Note to the press