Researchers at the University of Twente’s MESA+ Institute for Nanotechnology have succeeded in producing ultrathin films with an unusual combination of properties. At room temperature they do not conduct electricity, but they are magnetic. This would be extremely useful in applications that require fast magnetic switching, such as new types of memory, for example. The researchers collaborated with fellow scientists at Stanford University and Oak Ridge National Laboratory. Their findings have been published in Physical Review Letters.

These new materials are known as LSMO (lanthanum strontium manganite) films. When these films are grown on a strontium titanate substrate, their crystalline structure appears to change during the growth process. At a thickness of about 40 nanometres (a nanometre is one millionth of a millimetre) or less, the electrical conductivity of an LSMO film abruptly drops to zero. At the same time, the Curie temperature shoots up. As a result, the material remains magnetic even at temperatures well above room temperature. The trick is to control the growth of the film accurately enough to consistently achieve the desired change in the crystal. In previous work with other materials, much lower temperatures were required to produce magnetic properties of this kind.

The resultant insulating magnetic layer is suitable for “spin polarized tunneling”. In addition to carrying a charge, electrons have another property, known as “spin”. The direction in which they spin around their axis (clockwise or counter clockwise) carries magnetic information. The thin LSMO film, which is now magnetic, has a preference for a given direction of spin. Thus electrons with this type of spin can “tunnel” through the film more easily than electrons which spin in the opposite direction. This offers a new switching method for information carriers, a property that will be of enormous importance in future spintronic devices.

The research has been done within the Inorganic Materials Science Group (IMS) of Prof Dave Blank and Prof Guus Rijnders. The group is part of the MESA+ Institute for Nanotechnology of the University of Twente. 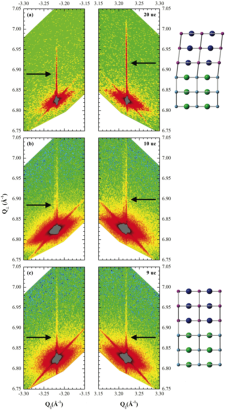