20 kilos of graphene will improve all the touchscreens in the world.

In the last 10 to 15 years, two-dimensional, or 2D, materials – so-called because they consist of just one layer of atoms and therefore lack a significant third dimension – have been heralded as one of the wonders of the 21st century. Although still being developed into useable, commercial products, they continue to be seen as potential game changers for many sectors. They are expected to make aeroplanes and cars lighter and stronger, computers more compact and faster, sensors more sensitive, and many appliances, machines and systems more effective and maintenance-friendly. The University of Twente’s MESA+ Institute is one of the frontrunners in the research and development of these miracle materials of the future.

The best-known 2D material is graphene: ultrathin, feather light, stronger than steel and diamond, conductive, transparent and flexible. Less well-known, but equally promising, says UT scientist Harold Zandvliet, are two materials that are similar in structure to graphene: silicene and germanene. ‘There are significant hurdles to overcome before we see these types of materials used on a large scale in industry or in daily life, but they are potentially dream materials,’ he says.

Graphene is not only the most well-known 2D material, it is also the most studied: hundreds, if not thousands, of research groups around the world are endeavouring to unravel its secrets. Graphene is related to a natural material we use to fill pencils: graphite. It is made up of a single layer of carbon atoms and was first isolated and identified in a lab in 2004. Russian-Dutch physicist Andre Geim and his Russian colleague Konstantin Novoselov received the Nobel Prize for Physics in 2010 for their work on graphene, which included developing a method for studying the new material.

The strongest material in the world, graphene is so strong that a square meter sheet of it, many times thinner than a sheet of paper, can carry several kilogrammes – say, the weight of a baby – without breaking or sagging. It is completely inert – and therefore insensitive to humidity or oxidation – and an excellent thermal and electrical conductor. This conductivity, combined with its nearly total transparency, makes graphene an exciting option for many applications, such as touch screens. The fact that graphene is also the world’s thinnest material adds to this potential: assuming all seven billion people in the world possess one touch screen device each of about ten by ten centimetres, it would take a mere 20 kilos to provide them all with a graphene screen, Zandvliet estimates.

It’s no wonder graphene is the subject of the biggest European research initiative ever, Graphene Flagship. Operating on a budget of a billion euros, Graphene Flagship has brought together a consortium of over 150 academic and industrial research groups from 23 countries to make the miracle of graphene a reality: despite the material’s promise – and the increase in low-value applications, from tennis rackets and helmets to conductive paints – the production of high-quality graphene remains too costly for large-scale use. With the Graphene Flagship, the EU aims to get graphene out of the lab and onto the market, generating new opportunities, jobs and economic growth. The project’s ambition is to the make the graphene dream come true in the next ten years by developing all kinds of ultra-strong, ultra-thin, conductive applications: from salt and CO2 filters to aeroplane and car materials, from better batteries and solar panels to flexible, wearable electronics, and from systems that clean up radioactive waste to minute ‘brain pacemakers’.

Graphene has one drawback

It was long thought that graphene would play a star role in the pursuit of ever smaller electronic components, replacing today’s leading material in the semiconductor industry, silicon. That dream appears to be out of reach for now, as  graphene has one major disadvantage: it has no band gap. Zandvliet: ‘If you look at graphene, what you is see a completely flat grid of linked hexagons; the atoms on the six corners of each hexagon lie on a plane. We call it a chicken wire structure. Because it is so flat, it does not allow us to create a functional ‘band gap’; it can be done, but only at the expense of the mobility of the electrons. The absence of a band gap means we cannot manipulate the conductivity properties. At the moment, this makes graphene unsuitable for creating the most basic building block in electronics, the transistor. This is because a transistor is a switching device – and without manipulation, there is no on/off switch. Zandvliet adds that this one shortcoming of graphene hardly diminishes the miracle status of this 2D material, which, thanks to its many other special properties, is destined to shine in this century.

An up-and-coming relative of graphene is ‘twisted graphene’. Zandvliet explains: ‘If you place two layers of graphene on top of each other and turn the top one a few degrees, you get a so-called moiré pattern. It is actually a new material, often with stunning properties. One recent discovery, for example, is that a rotation of one degree turns the graphene into a superconductor: a material that can transmit electrical current without any resistance. This paves the way for incredibly fast, energy efficient nano-electronics.’

Until recently, moiré patterns were better known outside the field of science. In pop art, for example, artists may superimpose layers of silk and lace, or screened photos, to create surprising visual effects and shapes. In digital imaging, moiré patterns sometimes occur accidentally, for example when the horizontal lines on the shirt of a TV host interfere with the lines of the TV image.

The discovery of moiré patterns in rotated graphene has given these eye catchers a whole new status. Zandvliet, just back from a conference on twisted 2D materials in Paris, is excited about the prospects. ‘The example of superconducting graphene comes from just one moiré pattern. Which other special properties will emerge as we explore more of these ‘magic angles’ is still a mystery. In that regard, we are at the very beginning of a fascinating journey of discovery into the possibilities of 2D materials.’

Zandvliet and his fellow scientists at the UT are among the world’s leading researchers of twisted and other 2D material variations. They are not the only ones who are excited: leading international scientific journal Nature reported earlier this year that ‘magic angle graphene’ is turning the world of physics upside down. Says Zandvliet: ‘From a research point of view, the amazing thing is that a simple push of a button, so to speak, aimed at twisting the upper layer of material, has yielded a completely new material with the very rare property of superconductivity. As researchers, we are working hard on mapping out the phenomenon and exploring the possibilities it opens up – for new electronic and optical materials, for instance.’

Beyond the Silicon Age

In the meantime, there still is one superb material of which the billions of transistors in our smartphone are built. That material is, of course, silicon. ‘’In addition to other valuable properties, silicon has the great advantage that it allows us to create a band gap, which to date makes it the ideal material for transistors,’ says Zandvliet. ‘You come across it everywhere: not just in semiconductors and computer chips, but also in glass, ceramics, lasers, photo cells for solar panels, X-ray machine components, and much more. We may not often realise it, but when we look back on the current age in a hundred years’ time, I’m convinced it will be known as the Silicon Age.’ 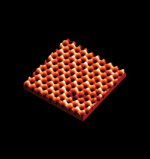 Rapid developments in the world of 2D materials are bringing forward some serious competition for silicon as a leading player in the semiconductor industry, says Zandvliet. He has high expectations for silicene and germanene, the 2D cousins of silicon and germanium. ‘In the Periodic Table, silicon and germanium are listed right beneath carbon, and they share many properties with carbon. Silicon has a diamond structure, but the synthesized version, silicene, has the same chicken wire structure as graphene. The same goes for germanene. And, contrary to graphene, these materials are not flat, but ‘buckled’: three of the corner atoms are positioned fractionally higher than the rest. This means that with both materials we can create the band gap that is so important in building transistors.’

Because silicene is two-dimensional and the electrons in silicene are far more mobile than those in silicon, Zandvliet expects this newcomer to play a role in the development of smaller, much faster transistors in the future. Another great advantage silicene has over graphene is that it is fully compatible with today’s silicon technology, he notes. ‘If we were to convert to graphene, large sections of the electronics industry would have to be overhauled: silicene is much easier to integrate in our existing production systems.’

The main hurdle yet to be overcome in the maturation of silicene and germanene – one that Zandvliet and his colleagues are working hard on – is manufacturing. Zandvliet explains: ‘Silicene and germanene are synthetic materials; we have managed to grow them on a substrate, but not on their own, like graphene. Also, as opposed to graphene, they are not inert: when exposed to air, they start to oxidize, losing the properties that make them special. Until now we have only been able to prepare them in a vacuum. But in their current form, we cannot use them. We are researching possible solutions to this problem. One is ‘capping’, which is applying a coating to protect the material’s properties. Obviously, the coating material itself must also have the right properties, so that it doesn’t couple with the silicene or germanene. We have a lot of steps to take before these amazing 2D materials become useable – but the dot on horizon is coming closer.’

PROF.DR.ING. HAROLD ZANDVLIET
prof.dr.ir. H.J.W. Zandvliet (Harold)
Professor of Physics of Interfaces and Nanomaterials, faculty of Science and Technology (TNW), University of Twente Studied Applied Physics and obtained his PhD at the University of Twente After his studies, he worked at Philips on one of the first Scanning Tunnelling Microscopes (STM), a technique that allows scientists to determine the topography of an object on an atomic scale Professor at the UT since 2005 Field of interest: among other things, new (2D) materials, such as graphene, silicene and germanene

‘A university exists to educate young people. For me, that is the main driver behind the work I do. Whether I am teaching Bachelor’s or Master’s students or I am busy working on research in the lab with PhD students, it is always about supporting people in their development - and their contribution to science. Exploring the uncharted waters of science is a thrilling and breath-taking experience - especially if you can take others with you.’