The PhD Defence of Marijn van de Putte will take place in the Waaier building of the University of Twente and can be followed by a live stream.
Live Stream

Marijn van de Putte is a PhD student in the department Inorganic Materials Science. Supervisors are prof.dr.ir. M. Huijben and prof.dr.ir. G. Koster from the faculty of Science & Technology. 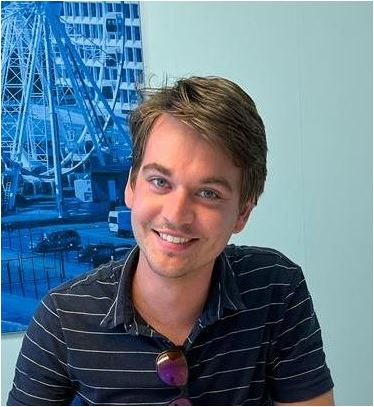 The internet of things is a collection of smart devices ranging from smart doorbells to parking sensor networks, mostly powered by (lithium-ion) batteries. As these batteries need to be replaced every few years, pose a fire hazard, and have a large environmental impact it is necessary to look for alternatives like energy harvesting devices. One way to efficiently harvest energy is by using thermoelectric generators (TEGs), which directly convert thermal energy into electrical energy. The technology for TEGs is already available, but the materials involved still need to be improved to make the devices more efficient. An often applied strategy to improve the figure of merit of thermoelectric materials is nanostructuring. The most efficient way to introduce nanostructures is through self-assembly like what happens in vertically aligned nanocomposites (VANs). These VANs are a combination of two oxide materials that self-assemble into nanostructures due to their immiscibility. This is an interesting new research direction as VANs are novel structures and have not yet been explored for thermoelectric applications. It was hypothesized that the nanopillar structure present in the VANs will improve the thermoelectric figure of merit by reducing the thermal conductivity while keeping the electrical transport properties intact. A model system of La0.7Sr0.3MnO3 (LSMO) and ZnO was used to study the applicability of the VAN architecture for thermoelectric applications, where the ZnO is the thermoelectric phase and LSMO forms the nanopillars to improve the properties. This material combination has been studied before in literature, but only with LSMO as the majority phase, whereas for thermoelectric applications the ZnO needs to be the majority phase.

VANs of LSMO and ZnO were grown by pulsed laser deposition and the effect of the growth parameters like substrate temperature, deposition frequency, and VAN composition was studied. It was found that a higher temperature better promotes a more vertical orientation of the nanopillars, whereas a lower temperature resulted in a more maze-like orientation of the nanofeatures. The deposition frequency was shown to be influencing the nanostructure greatly by changing the diffusion time of the arriving species during deposition. A low frequency resulted in a thick LSMO interface layer with a maze-like oriented nanostructure on top, whereas going to higher frequencies seems to improve the verticality of the nanofeatures and forming nanopillars. The composition has a great effect on the nanostructure as well, as the composition with less LSMO tends to form well-defined vertical nanopillars, whereas the VANs with a larger LSMO content show a more maze-like structure. The change in composition also resulted in different strain states in the LSMO phase, where the nanopillar structure had a more tensile strained LSMO phase in the out-of-plane direction, resulting from the coupling at the many vertical interfaces. For thermoelectric applications, the nanopillar structure is desired, and therefore the composition of (LSMO)0.1(ZnO)0.9 is chosen, combined with a deposition temperature of 850 °C and a deposition frequency of 5 Hz. However, a measurement of the electrical properties showed metallic behavior of the VANs instead of the expected semiconducting behavior, which is expected to be the result of an LSMO interface layer at the substrate interface.

Before diving deeper into the nanostructure and thermoelectric properties of the nanocomposites, a sidestep was made to look into the magnetic properties. As the nanopillar structure of magnetic material (LSMO) is unique, it is fundamentally interesting to study its magnetic behavior. A model was used to predict the ferromagnetic properties of the VAN with the nanopillar structure, a VAN with a maze-like nanostructure, and an LSMO thin film for reference. The model was found to predict the behavior of the thin films quite accurately. The magnetic response of the LSMO thin film and the VAN thin film with nanomaze structure had similar behavior, however, the VAN with the LSMO nanopillars behaved quite differently. Whereas the LSMO thin film and VAN with nanomaze structure had a clear easy axis in-plane, the VAN with nanopillars exhibited a more out-of-plane oriented easy axis. The origin of this change in easy axis was calculated to be originating mainly from the shape anisotropy, with only a negligible contribution of the strain-induced anisotropy.

In the pursuit of a thermoelectric application for the VANs, a deeper understanding of the structure of the VAN is necessary. Especially the structure at the substrate interface is important as the hypothesis is that an LSMO interface layer is present which short-circuits the thin film, rendering it useless for thermoelectric applications. The growth of the (LSMO)0.1(ZnO)0.9 VAN was studied on several different substrates in order to find a way to prevent the LSMO interface layer formation. It was found that by growing the VAN on a ZnO substrate, the LSMO interface layer could be prevented as the ZnO in the VAN had a better lattice match to the substrate than the LSMO in the VAN. However, the problem arose that the substrate also contributes significantly to the electrical transport. A VAN was grown on a ZnO buffer layer on SrTiO3 (STO) substrates to try to prevent the LSMO layer formation. However, even on a ZnO buffer layer, the VAN thin film behaved like a metal, indicating the existence of an interconnected LSMO phase. To study the influence of the substrate orientation on the formation of the VAN structures several VAN thin films were grown on differently oriented STO substrates, (100), (110), and (111). A STEM study revealed that all VANs exhibited an LSMO interface layer, however, the electrical transport properties varied wildly as the resistivity of the films indicated that the films grown on STO (110) and (111) showed semiconducting behavior around room temperature, whereas the VAN on STO (100) is still behaving metallic at room temperature. Additionally, the STEM study revealed interesting domain-matching relations in different directions, in addition to the 5:6 ratio that was observed before in literature along the (110) orientation of ZnO and the (001) orientation of LSMO, also a 21:22 relation is seen along the (100) orientation of ZnO and the (10) orientation of LSMO. It was shown that the LSMO:ZnO VAN prefers to form interfaces between the ZnO (100) and the LSMO (110) planes, as the LSMO even grew in the (110) orientation on STO (111) substrates to accommodate this specific interface.

Finally, the thermoelectric properties of the VAN thin films were measured, starting with the resistivity and Seebeck coefficient of the VANs grown on different orientations of STO over a wide temperature range. It was shown that the samples exhibited a semiconducting behavior over the whole temperature range, with their values lying in between those of the LSMO thin film and ZnO thin film. The VAN on STO (100) exhibits the lowest resistance over the whole temperature range, followed by the VAN on STO (110), and the VAN on STO (111) exhibits the highest resistance, closest to the ZnO reference thin film. The Seebeck coefficient of the VANs on STO (100) and STO (110) showed very similar relatively low values, whereas the VAN grown on STO (111) showed large absolute values both at low and high temperatures. Additionally, all three VANs showed an interesting transition from n-type at lower temperatures, to p-type at higher temperatures, just as the ZnO reference thin film showed. To try to figure out the mechanism behind this transition, an X-ray diffraction study was performed at temperatures below and above the transition temperature of about 470 °C. No structural change was observed from this study, pointing towards a change in the electronic structure of the material being the cause for the transition. Using Arrhenius-type plots to fit two different models to the resistivity data indicated that the low-temperature electronic transport is governed by electrons, while the high-temperature transport is more likely to be governed by ionic conduction, like oxygen vacancies. Several possible mechanisms for oxygen vacancies are discussed, but no conclusions can be drawn as of yet. By combining the Seebeck and resistivity data into the power factor, the effect of the VAN architecture on the electrical transport properties was shown. At high temperatures, the VANs grown on STO (100) and STO (110) had nearly identical power factor values as the ZnO reference thin film, indicating that the VAN architecture does not harm the electrical transport properties of the thin films. The VAN grown on STO (111) exhibits an even higher power factor at higher temperatures compared to the ZnO reference thin film. Therefore the VAN architecture not only does not harm the electrical transport properties, but it can also even improve them.

In summary, using the model system LSMO:ZnO, it was shown that the vertically aligned nanocomposite architecture is a very promising strategy to improve the thermoelectric properties of thin films. This exciting new research direction for both the thermoelectric community and the vertically aligned nanocomposite community is one worth pursuing to push the boundaries even further.

Marijn van de Putte is a PhD student in the department Inorganic Materials Science. Supervisors are prof.dr.ir. M. Huijben and prof.dr.ir. G. Koster from the faculty of Science & Technology.